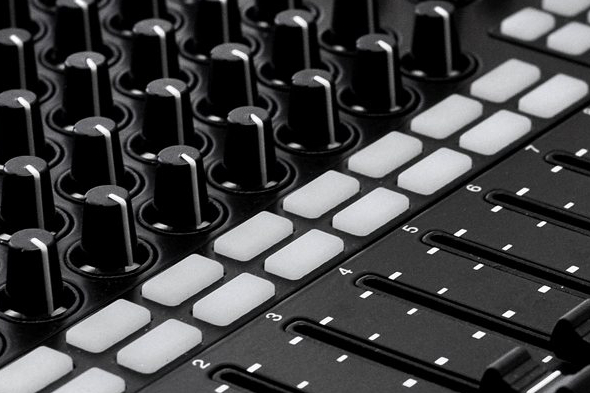 The DS1 presents itself as a sturdy console that has just enough weight to instill an air of confidence. It’s not likely to be pushed off a table by accident, and even if it was, the rugged black aluminium shell looks and feels like it would survive with barely a scratch. Livid Instruments and Dubspot have billed the DS1 as a mix controller, so it makes sense that the layout reflects this function.

In fact the DS1 looks like any number of eight-channel hardware mixers on the market, such as the Soundcraft EPM8 or the ZED-14 from Allen & Heath. The nine faders are 60mm in length and eight of them are topped off with two buttons and five rotary knobs, all with RGB back lighting, and resembling the channel strip of most mixers. The remaining fader is set away from the others, giving it the impression of a master fader. Above the master fader is a grid of nine RGB backlit buttons, topped off with four more rotary knobs and four push encoders. 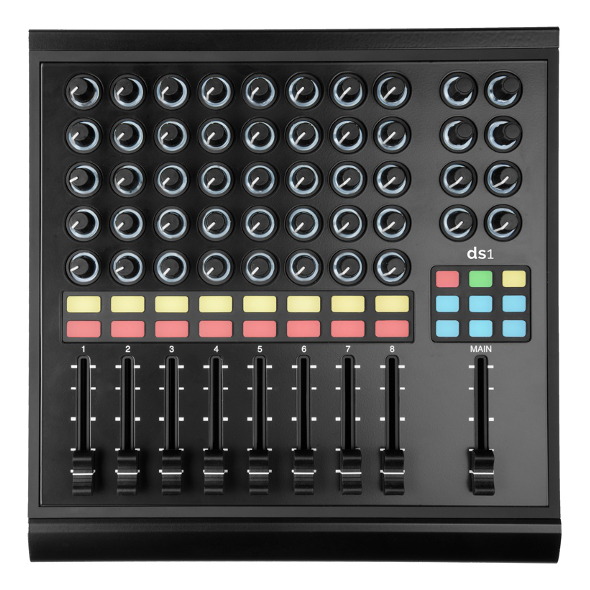 The DS1 will connect to your computer via a USB cable which also provides power, although there is a separate AC port if you need to make use of the controller away from your computer. There is also an expression pedal input compatible with Livid Instruments’ Master Fader, expanding the possible uses of this piece of hardware from simple channel mixer to DJ mixer. As you might imagine, the DS1 will map to any MIDI compatible software so the functionality of this unit could include anything from mixing in digital workstations to programming soft synths and instruments to controlling lighting rigs.

It’s clear that the nuts and bolts of this controller have been designed by Livid Instruments but there is a feeling that the overall project has been driven by the needs of music technology educators, Dubspot. Dubspot are a school for electronic music production, DJing and performance and it seems that the DS1 was born out of Dubspot’s need for a simple all-encompassing mix controller that students could use with a variety of software packages in whatever style they choose. Dubspot CEO, Dan Giove, explains that they really wanted something along the lines of the now discontinued Evolution UC-33. So they contacted Austin-based Livid Instruments, who came up with a prototype featuring a digital display showing MIDI controller numbers where the push encoders now reside, a clear nod to the UC-33’s design.

Electronic studio mixers and producers will no doubt be the main users of this controller, and, with the addition of the Master Fader via pedal input, DJs using laptops will also appreciate the flexibility of the DS1. Livid Instruments has developed several scripts for use with DAWs such as Ableton Live 9, Bitwig Studio and Logic Pro, with the addition of Native Instruments Traktor for digital DJs. As a MIDI controller it is also possible to create your own mappings, aided by the Livid Editor that works online with the required Jazz MIDI plug in. You can use the editor to change the RGB colours, create new settings or to save any number of settings for future use.

Using the DS1 with Ableton did take a little bit of getting used to, but after a few minutes working with various mappings and macro controls, manipulating parameters via the control surface became a smooth operation with no strange glitches or latency problems. The faders feel strong and although they have a small amount of sideways movement on them, they performed much better than expected. The buttons are slightly sponge-like and though this has been a problem in the past on Livid Instruments designs, the new buttons are much sturdier and don’t have that tendency to stick under the unit’s chassis. As always, the knobs and encoders are of a high quality and with proper nutted fixtures, the build feels solid and luxuriant.

One drawback of having only eight channels and no motorized faders is that moving between channel groups may cause problems with settings jumping around, and with all the connections running down the side of the unit, there is no possibility of putting multiple DS1’s side by side. However, the classic channel strip design and the flexibility of being able to work in any digital platform that utilises MIDI makes the DS1 from Livid Instruments well worth a close inspection. Its simple design lends itself to any number of uses and should prove popular for those finding their way around digital mix platforms.