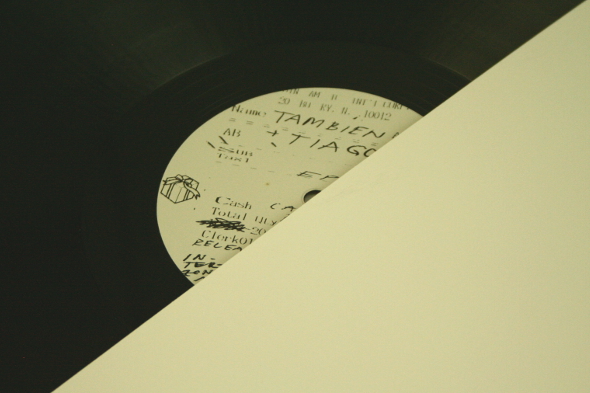 It’s not clear who came up with the idea of Tambien and Tiago joining forces in the studio, but as a concept it makes a lot of sense. Musically, they have a lot in common, from a shared love of sweaty tropical rhythms, percussion-heavy re-edits and downbeat, ultra-deep techno, to the wonky, do-it-yourself ethos of their respective labels. Apparently, the trio behind Tambien – producer Bartellow and Public Possession shop/label owners Marvin and Valentino – have long been friends with Tiago Miranda – a rapport that has seen the quartet share a DJ booth on numerous occasions. 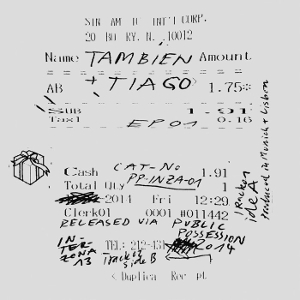 Given this friendship, you’d have expected all four producers to sit down in the studio together. In fact, both tracks were made in a much less “hands on” way, with stems, samples and arrangements being sent back and forth between Munich and Lisbon over a number of months. You can’t tell, though; the two untitled tracks sound like a particularly effortless fusion of their styles. Certainly, you can hear echoes of past productions on both sides of the record.

“Track 1” (that’s side A) recalls the dense, sticky, African-influenced grooves of Tambien’s “Dregato” and the “Overheater” and “Hans Renegade” tracks from the second Tambien Project 12”. The rolling, loose-but-heavy percussion that propels the track forward (kind of like an African hip-hop break, speeded up) has also been a constant in Tiago’s releases on Iterzona13, particularly the three tracks on 2013’s JooJoo 12”. The chunky bassline, house tempo shuffle and supple, soft-focus chords – used sparingly throughout a pleasingly upbeat and dancefloor-centric production – are also shared trademarks. In fact, the only real surprise is the energetic hip-hop vocal samples used throughout the track. This shouldn’t be seen as a criticism, though; both Tambien and Tiago are very good at what they do, and sticking to their core strengths was the sensible thing to do.

“Track 2” on the B flips the script. In some ways, it’s the sort of track you’d expect them to make together. Dreamy, melodious, with ear-pleasing chords, pads, and twinkling electronic touches, it’s Balearic in spirit yet wedged at a tempo between house and techno. There’s just the right amount of rhythmic grunt too, the African influence is much less obvious, but it’s still there in the mix. It feels a little like a spacey take on Tiago’s work for DFA and Leng, and there are definitely echoes of Tambien’s “Are You In Touch”, a deliciously fluid trip into deep, downbeat techno territory released on ESP Institute earlier this year. Like a lot of the Tiago and Tambien’s more melodious efforts, it seems designed to please headphone listeners just as much as dancers.