Juju & Jordash: It’s All In Our Heads 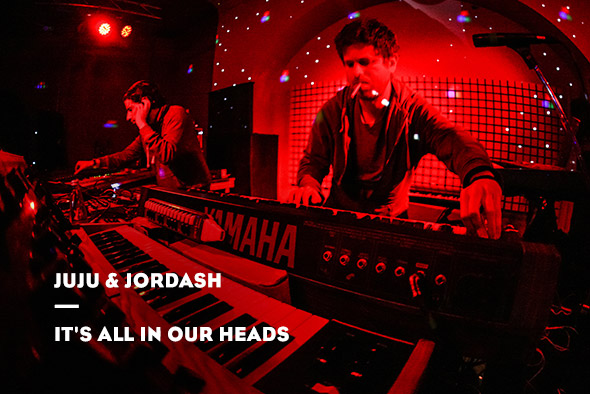 Improvisation, insomnia, influences and the gruelling processes that go into recording a Juju & Jordash album are under discussion as Brendan Arnott catches up with the Amsterdam duo.

It’s after midnight when I connect with Jordan Czamanski and Gal Aner, but both members of the Amsterdam-based duo Juju & Jordash seem like they’ve come to terms with not sleeping. Czamanski admits to me their fourth LP, Clean Cut, may be responsible for traces of lingering insomnia, chalking it up to “psychological issues” related to the process of seeing the album through to its November release date. “It’s just wanting it to be perfect, and stressing out over every single little detail” he tells me. “But also, trying to step back and look at the greater picture of the album, trying to envision how it would actually sound to someone who’s listening to it for the first time.”

It’s not exactly surprising that obsessiveness is a key ingredient for the Israeli duo’s output, which humbly began when Aner & Czamanski’s day job as gigging jazz musicians led to after-work analogue techno collaborations. Over the last decade, the duo have carved out a name for themselves as discerning purveyors of music ranging from the politically subversive (a blistering interrogation of national identity in their Unleash The Golem project) to the dancefloor-jarring (the anxiety-stuffed breakdown at the core of “Deep Blue Meanies”) to straight-up dancefloor burners with a self-parodic tinge (ahem, just Google “Jewsex”).

While their steady ascent may appear effortless to those catching one of their live performances, Juju & Jordash records may actually be pressed with blood, sweat and tears for how much they consume the minds of their creators. Thankfully, recording tracks is something Czamanski admits they’ve relaxed on a bit in recent years. “Recording is way easier now, we’re not fussy at all and try not to overthink things while playing live”, he explains, an admitted departure from earlier career attempts trying to program spontaneity. “Now, my worries are kind of during the final mixing moments… knowing that afterwards, we’ll agonize over what we’ve made during the editing process.” 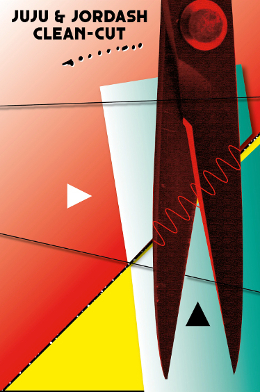 For Czamanski, putting an idea down is much easier than finalizing it. “Initially when we record a jam, we’re capturing a scent of a certain vibe that we’re happy with. But… we know that in order to actually reach what we’re actually going for, it’ll need a lot of production.” So the bulk of worrying comes from the final tweaking? “Editing and tweaking” he responds, “but saying tweaking is… ” Czamanski chuckles, as if I’ve suggested that constructing the Berlin Wall was an afternoon project.

The scissor blades precariously poised on the front cover of the new LP look almost like a modern equivalent to the sword of Damocles – ready to drop at a second’s notice and impale someone. And from the album’s opening seconds, that sense of urgency translates perfectly to the title track, which snaps to life with a whiplash-inducing crisp drum machine pattern, pan-flutes and pulses of driving synthesizer bass.

While Techno Primitivism, their previous full-length on Dekmantel, sounded like it thrived on the breathless uncertainty improvisation enables, Clean Cut comes out of the gate roaring with intent. Czamanski thinks the album’s functional nature took shape naturally. “I don’t think we really talked about what we were doing,” he shrugs, admitting there’s never an explicit dialogue about musical intent. “But it’s easier or more natural for me to make abstract music. Maybe that’s because I’m not very trained musically and always gravitated towards free jazz and things that don’t necessarily require heavy music knowledge.”

Czamanski continues, pointing out the process of making Clean Cut was largely about shedding that comfort. “So for me, it’s more of a challenge to make a direct kind of album than to make more abstract, or hazy music,” he discloses. “It’s the same thing production-wise. Over the last 10 years, we’ve been heavily relying on tape echoes and stuff like that,” components Czamanski is quick to point out that he still loves, while admitting they’re “things that blur the edges” of Juju & Jordash material.

“I dunno, I’m just talking out of my ass right now,” he murmurs, and for a brief second I wonder if he’s about to strike his comment from the record, or even hang up on me. Fortunately, he continues. “Both musically and production-wise, I approached this album wanting to have clearer edges and clearer musical ideas than in the past – simply because I feel like it’s more of a challenge for us.” 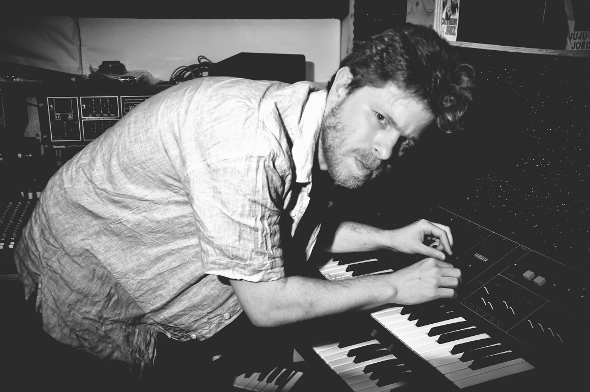 Though Czamanski puts his own musical experience in question, you’d be hard-pressed to notice it when listening to Juju & Jordash live. Their recent Dekmantel Boiler Room set simmers with self-assured focus from its opening notes to its finale, despite the duo lacking a soundcheck and being forced to assemble their complex tapestry of analogue equipment in 30 minutes while ducking and weaving around another DJ. Watching the two musicians work side-by-side, barely speaking with each other is like watching an elaborate Rube Goldberg machine set into motion, or as if both parties have become possessed by the electricity pulsing through their gear. Czamanski is so singularly focused in the process that there’s a cigarette hanging from his mouth that doesn’t get lit until the video’s 30-minute mark.

“The only way to go with our whole improvising thing is with confidence,” Czamanski admits. “The most important thing is confidence. More than anything. More than even musical knowledge, even. I would rather play with someone totally untrained but confident than with a very trained academic musician with no confidence. We separately realized that the best gigs we had are the ones we just felt confidence in, and we just adopted that mindset when playing,” he continues. “But uh… I guess we lack confidence the rest of the week.” 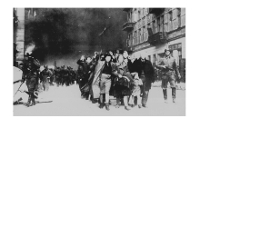 Listening to Clean Cut, it’s hard to agree with Czamanski’s modesty – from the razor sharp inhalations of “Wheeze Please” to the malfunctioning slow-building climax to “Maharaja”, it’s an incredibly polished and confident project – even Czamanski himself admits on Twitter a few days after our interview “we actually made an LP I could whistle”. The loopy synth notes of “SP Shakes” are an indication that this LP seems destined to see the most club play of any Juju & Jordash effort yet, but Gal Aner claims that aiming for club success was never the work’s premise – instead, “the goal was to have tracks that would sound good both in a club and for listening at home.” Given Czamanski’s admittal that all tracks began as “30 to 45 minutes long initially,” and were pared down from there, I’m curious if the process means distilling tracks to their most danceable moments, or if Clean Cut was tested out in clubs, and modified according to the whims of dancers.

“I have a… problem with that,” Czamanski chuckles. ” I definitely want to hear our tracks in the club – I’m definitely happy when we’re in the club and other people play our tracks – I love it – but for some reason I can’t bring myself to put a J&J record on a club turntable…I don’t know why. I can play Magic Mountain High (Aner & Czamanski’s collaboration with Move D), and I think I could even play my solo stuff…” he trails off.

By this, I assume he means Juju & Jordash tracks are non-negotiable in their creation; that dancefloors can like it or lump it. Czamanski is quick to correct me. “No, you misunderstand – it’s not that I think it’s inappropriate. I’d love to play all Juju & Jordash tracks in a club setting. What I meant is that I have psychological issues that prevent me from playing our stuff in the club. I’m kinda embarrassed to put our own tracks out there, and it’s not that I think it wouldn’t sound cool. I’m just not capable of doing it.” 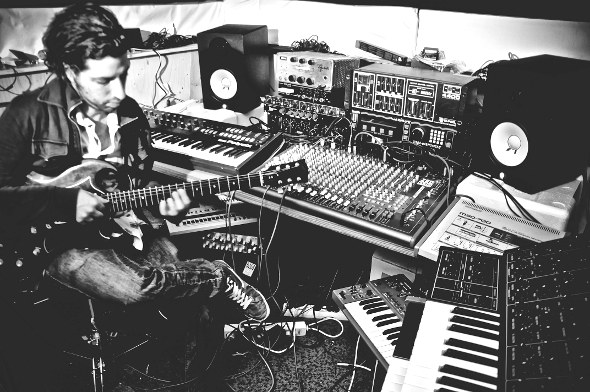 I comment there must be a fair amount of self-deprecation at the core of his discomfort. “I don’t feel super modest, it’s just the reality is that there’s always going to be Miles Davis,” he replies. “Like… we’re nothing. Y’know what I mean? It doesn’t matter. It doesn’t matter how good we’ll get. We’ll never reach our idols. So we’ll always be shit.” He laughs, pauses, and then adds a caveat. “I do think we’re doing interesting stuff, I don’t think we’re really shit, both in Magic Mountain High and Juju & Jordash. It’s not new at all though, because people have been doing it for 30 years, but it’s challenging, and I’m proud of that. But we’ll never be our idols.”

Fair enough. But listen to the ribbiting chorus of distorted vocal gurgles in “Deadwood City”, and it’s clear Clean Cut has no desire to emulate idols. Instead, it pulls inspiration from a pretty eclectic roster of influences – showcasing the trademark baby giggle that Aaliyah’s music popularized in “Whippersnapper”, right before “Anywhere” channels Prince with a jagged guitar line. It’s also the first album that Czamanski’s own vocals make a prominent appearance in the mix. “We’ve always used microphones and stuff and had voice snippets or claps or stuff that’s been microphone-based,” Czamanski admits. “But it’s more prominent in this now that I think about it.” 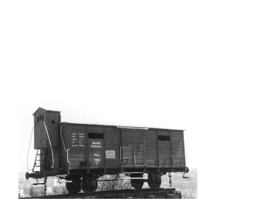 For Aner, vocals are less important than the equipment that shaped the album, especially the SP1200 sampler the pair conveniently borrowed from studio neighbour Tom Trago. “It’s just the nature of this machine, which most of the drums, vocals and bass on the album are all coming through,” Aner explains. “It’s a cheesy word I guess, but it’s got a gritty, dirty sound – you can even sometimes just bang on it and get some cool results. It really changes the character of the sound.”

Both Aner & Czamanski praise sound engineer Marco ‘Ma’ Spaventi for mastering the album, a process they admit is tough to pin down. “It’s more abstract than bringing things into focus, or changing the way things interact with each other” Aner explains. “For each person, good mastering means something different, but for us it means maintaining the sound of the original recordings, but making it… shine.”

“For dance music it’s especially important,” Czamanski adds. “It can really make a difference on a club’s sound system – if the kick is a bit too heavy in the pressing, the needle will skip, or even if it doesn’t skip it’ll be too boomy in the room. A good mastering engineer for dance music needs to have one foot in that world as well, which Marco definitely has.” For Czamanski, the small things all add up. “Because we’re so deep into this album, we’ve listened to it thousands of times by now,” he says, voice absent of humour, “we’re talking about really little details. We’re listening to the really minute things.”

What’s both amazing, compelling, and at times frightening is the grueling process of making, revising, and finishing a Juju & Jordash production seems entirely self-inflicted. When I ask about whether they’re nervous about the album’s reception, Czamanski’s response is lightning-quick, any previous remnants of late-night exhaustion now completely vanished. “There’s no external pressure whatsoever,” he tells me. “Like, y’know, our last album’s reception was very nice, so of course we want this album to have the same reception.” He laughs slightly as he continues, as if he’s acknowledging Juju & Jordash’s greatest source of power and anguish in the same breath. “But as for pressure? It’s all in our heads.”

Clean Cut by Juju & Jordash is out now on Dekmantel