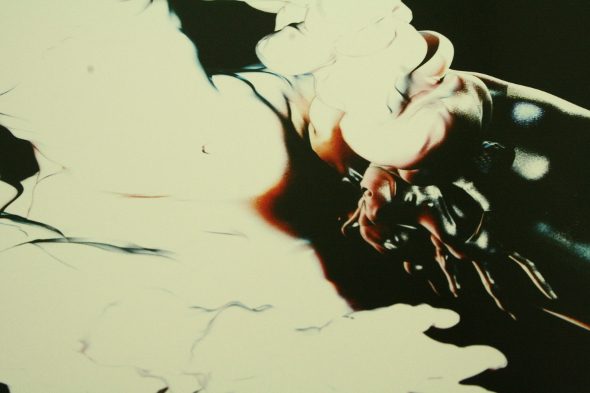 There was a certain malleability to Alejandro Ghersi’s early tracks as Arca, released on UNO in 2012, made all the more explicit by being collected under two numbered EPs called Stretch. He was pegged as a hip hop producer of sorts, leading to work with Kanye West and FKA Twigs, but the real reason for his music sounding like rubber was something much more personal. “It was about different voices that came from completely different parts of my mind or my heart, shouting at each other in this crowded room,” Alejandro Ghersi recently told The Fader recently. “Kind of settling into your body sexually. It was a lot about flexibility and elasticity, things wrapping around themselves in a very charged way.” 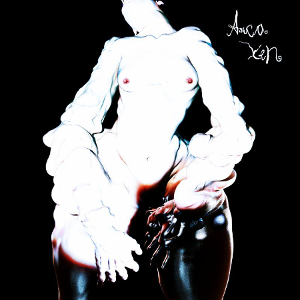 Much like those first two EPs, written shortly after he came out, Ghersi’s debut album, Xen, is concerned with questions of identity and sexuality. Xen is the figure depicted on the cover by Ghersi’s regular visual collaborator Jesse Kanda, a fictional alter ego of the producer described by Kanda to The Fader as Ghersi’s “sassy, confident, very feminine side”. Though Xen’s form has recognisably female features, Ghersi explained that “Xen is not really a boy and it’s not really a girl, and her mere existence is kind of repulsive and attractive at once, and so I imagine her under a spotlight, in this room full of people just staring, wide-eyed, openmouthed.”

Growing up in Venezuela, Ghersi feared people discovering he was gay due to the prevailing attitudes against homosexuality, and it’s difficult not to imagine Ghersi as the figure under the spotlight. Xen isn’t a coming out album, but its subject feels even more personal: an attempt to explore his own gender identity. Most artists writing an album about such a personal subject matter would approach it through lyrics, but Ghersi uses the album to explore his alter ego through sound, texture and melody alone. It’s a fairly ambitious undertaking; one also requiring an appreciation of Kanda’s visual work as an equal part of the package.

This isn’t to say language is absent from the 15 tracks. Throughout Xen it feels as if Ghersi is creating a new vocabulary through sound, forming a sonic language only he understands how to use. While his music fits comfortably into the same glossy digital landscape as artists like Oneohtrix Point Never, M.E.S.H. and Dutch E Germ, the reference points are often bent, squashed or swallowed whole. There’s a internal logic operating throughout the structure of the music of Xen that’s very difficult to unpick; the rhythm and piano sample on “Thievery” for example might ground the track in hip hop, but the extraterrestrial synth melodies engulfing it make it hard to tell if there’s really any structure at all, or if it’s a trick of perception. It’s a definite shift from the earthy, smoky beats of his Stretch EPs, where structures were much more clearly defined.

If there’s a criticism to be made of Xen, it’s that it’s hard to take everything in. Many tracks are under the three-minute mark, packing a multitude of ideas that are dispensed with as soon as they’re used. Opener “Now You Know” for example, is the sound of trying to walk through epoxy resin in an extraterrestrial rainforest while an ice cold stream rushes around your head. The sudden shift to the simple piano lament of “Held Apart” and swiftly rotating synth blasts of “Xen” are disorientating, but these fluctuations feel an appropriate way to reflect the complex range of emotions Ghersi is trying to convey.

Xen is filled with these moments of fear and melancholy, but the overwhelming feeling that comes from listening to Xen is one of elation. Ghersi has said that he made Xen in states he “didn’t really have full control over,” and there’s a sense of the music flooding out cathartically rather than simply being constructed as blocks in a sequencer. It’s often just fleeting moments that reflect this; the swelling synth sweep halfway through “Sad Bitch”, the dancing strings of “Sisters” and tumbling baroque melody of “Slit Through.” The sounds may be glossy, digital and verging on holographic, but Ghersi’s ability to imbue his music with such subtlety is enough to help you forget it’s from a computer.

It seems odd that an album so concerned with identity – and that addresses it in such a proud manner – has had its artwork censored on the version sent to streaming services and digital download stores. Xen may be an imaginary figure depicted by Kanda on the cover, but someone, somewhere decided her nipples and pubic region could prove offensive, and unless you buy the physical version, they’re pixelated out. It’s an act of censorship that unwittingly reveals an uncomfortable truth: most people aren’t quite ready to be confronted with the gender identity issues Kanda explores in Xen. Immerse yourself the unbridled joy Ghersi conveys throughout, and you’ll see just how absurd that is.