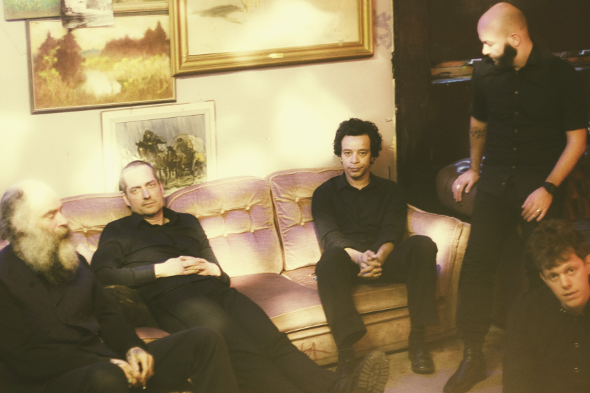 The Swedish band will release a five-track EP of “psycho-glam swagger” on the UK label next week.

The Diagonal label run by Powell and Jaime Williams is known for throwing out the odd curveball. Despite having a strong focus on the more gristly end of techno, with Powell himself, Bronze Teeth, Russell Haswell and Streetwalker all embodying that quality, the label isn’t afraid to release music less obviously aimed at the dance floor, as records from Death Comet Crew and Shit & Shine have demonstrated. Diagonal’s next release looks to be one of its most intriguing yet, taking the form of a five-track EP of “psycho-glam swagger” from Swedish band The Skull Defekts, whose most recent album came out on US label Thrill Jockey.

Despite The Skull Defekts riff-heavy sound, the band has underlying techno connections – Börft co-founder and iDEAL Recordings head Joachim Nordwall is a member – while Powell has spoken of the group’s dance floor appeal. “It’s so rhythmic, so driven, pulsing, that it just felt like club music to me,” he told The Quietus recently. “I think it’s important for us not to just go down a purely electronics route – club music doesn’t have to be that. I play bands in clubs.”

The label’s typically excitable press release promises “two extended dancefloor hypnotisers” among its five tracks, with the whole package providing “a taut flux of psychedelic rock and avant-techno with raids on arcane pop and percussive, tribal minimalism.” The eye-catching slime green artwork can be viewed below, and as ever comes from Diagonal’s regular sleeve designer Guy Featherstone.

Diagonal will release the Street Metal EP on November 10.

A1. Mission
A2. Mammal Combination
A3. Holy Drums Are Singing
B1. Holy Drums Dub
B2. Saturday Mourning