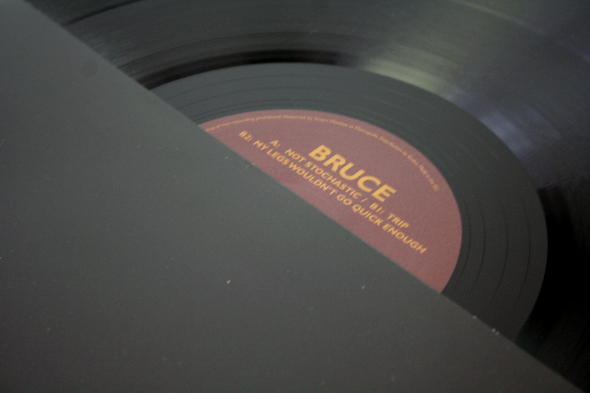 Bruce, let’s get this out of the way first; I’m a fan of your name. It has all the comfy familiarity that hooks into a long lineage of Hessle producers ousting pretensions and easy to roll off the tongue at a moment’s notice. Honestly, Ben, David and Kevin talk of being particularly selective and difficult to unanimously please when selecting which records make the cut for their label, sitting on records for months in order to see if they’re a fit for Hessle or not, but I think there’s a formula at play here. New producers – call yourself Dave or Terry and you’ll be on the fast-track to success. Probably. Possibly. 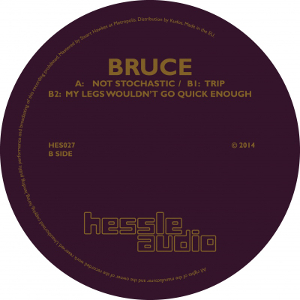 Anyway… since Bruce’s debut Just Getting Started 12” came out just a month ago on Dnuos Ytivil (and was recently reviewed on Juno Plus too), consider this your Brucie bonus (sorry, editor). Both the tracks on Just Getting Started were built as ruff-groove techno with an appealing sense of swing, and offered gratification in the destruction of that structure as Bruce took the term breakdown at its most literal. Not Stochastic is certainly aesthetically similar, but this time around the sense of fracture is more deeply embedded – as though the backs of these tracks have already been broken.

In part this might be because the sense of complexity and swing has been stripped back substantially. “Not Stochastic” starts hot and heavy but quickly traps the loop in stasis, progression mostly coming from sharp fades in and out as a reset. “Trip” feels like a rhythm track from a forgotten ‘80s industrial tape with nothing but a drum machine and heavy delay fx. Even for a label known for skeletal output these tracks feels radically and remarkably reduced as club music, and I’d be interested to hear of the reaction when they’re played out. In context though, and with Hessle’s reputation as a bridge between function and experiment, they probably work magnificently.

Last track “My Leg’s Wouldn’t Go Quick Enough” brings us back to a bit more bump – shrill (but not unpleasant!) drones unfurl around heavy bass and fathoms of reverb, whilst percussion ticks, kicks and glides on the surface. It’s heady stuff, reminiscent of the velvety atmospheres of Elgato at his best and taking the edge off of the dry texture of those first two tracks slightly. Keep ‘em coming Bruce.

A1. Not Stochastic
B1. Trip
B2. My Legs Wouldn’t Go Quick Enough