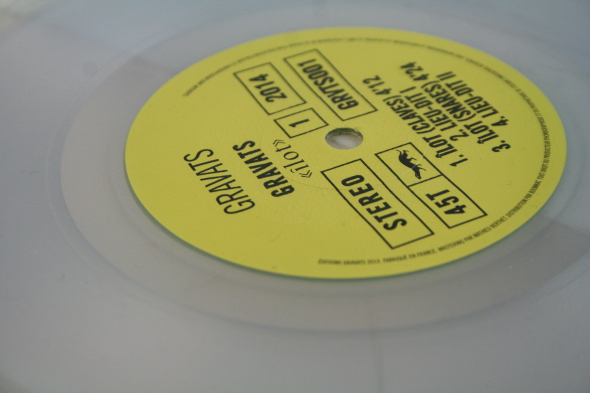 There’ll always be something romantic attached to a 7” release. They’re cheap (and cheerful) to manufacture, and due to their smaller surface area there’s less music to hear – this still doesn’t stop garage rock bands from Melbourne squeezing what they can onto a record. And if it’s not rare funk, soul or dub, it’s going to be for the most part, at least in the world of independent electronic music, something creatively askew, often born out of budget restriction or artistic aberration. 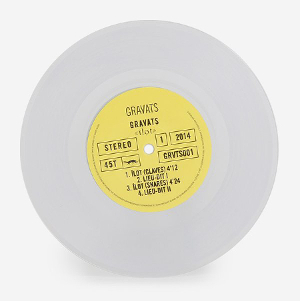 Editions Gravats is a new label from Philippe Hallais, aka Low Jack, run with close friend Jean Carval which debuts with this 7” from the former’s new alias Gravats. The two have described Editions Gravats as a place of reservation for the unreleased solo or collaborative work of French artists. The label has already revealed Quentin Vandewalle, aka Zaltan of Antinote fame, will provide a cassette mix of French psychedelic boogie and 80s motocross funk, while divulging they’ll provide a debut for the so far unknown Six In The Morning, with the promise of an album next year by French ‘psych-drone’ artist High Wolf.

But to the music of Gravats. Hallais lives up to the name Low Jack here by opening the B-side with “Îlot (Snares)”, a track that’s as dirty and pumping as “Irreligious ” from Mile Whittaker’s Faint Hearted LP and distorted as Mass Prod & Herva’s radical “Everything We Know Is Wonk”. The B-side’s locked groove is nothing to write home about, so I won’t, however the mutant, Acido-sounding loop of the A-side’s “Lieu-Dit (I)” is perfect.

Check out Ben UFO’s recent centenary podcast for the Truants site and you’ll find he opens the mix with “Îlot (Claves)”, a living beast of beats, bleeps and squelch set in a dense thicket of simmering overdrive. When it comes to French 7”s, Îlot by Gravats is the most fun since a run of four records Anne-James Chaton and Andy Moor released for the Unsounds label as part of their joint Transfer album, and also features the best locked groove I’ve heard since that Danger 7” Floating Points released on Eglo back in 2011.