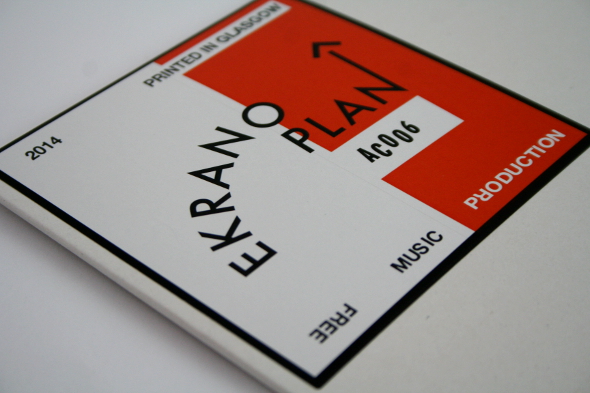 Even though the All Caps label name might imply a certain aggressiveness (at least, that’s what this writer imagines ALL CAPITALIZED WORDS imply), the Glasgow label’s output has recently been bustling with what seems like a second wind of creative inspiration – a distortion-laced DJ Guy re-issue from 1996 and Bluntman Deejay’s smoked out Esoteric Communion EP are two releases which pushed the label in a slightly more experimental direction. That’s not to say that earlier releases by Helix & Kowton didn’t have their groundbreaking moments, but their functional, non-nonsense aesthetic and blistering drum patterns signified that they were, if not “for club use only”, at least primarily intended for crowded rooms of perspiring dancers. 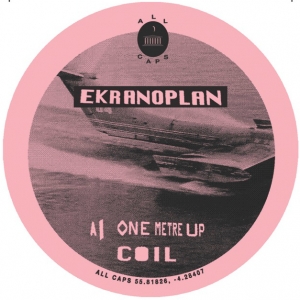 Secrecy shrouded this latest All Caps offering from Ekranoplan (who, it turns out, has come out to be none other than a collaborative affair between Julio Bashmore and Kowton) which straddles between the two worlds of functional dance tool and esoteric excursions into the subconscious mind. Until the recent emergence of a dedicated website revealing their identity, searching the name Ekranoplan throws you into a vortex of google results for Russian navy carriers from the early ’90s, but it’s an oddly fitting moniker, considering the oddness of those military transport ships developed just before the collapse of the Soviet Union. Not aircrafts, not seaplanes, not hydrofoils or hovercrafts, they looked menacing with their odd bulky designs, but actually served a utilitarian purpose – they carried resources across the ocean faster and more fuel-efficiently than other carrier ships at the time.

Similarly, Bashmore and Kowton’s music carries out its function with equal parts utility and panache. “One Metre Up” begins as a series of swooshing oscillations and echoing plucked strings- rising and waning with a lounging placidity, it sets an ambient, otherworldly tone in its brief minute and a half duration. It can be seen as more of a preparatory measure for “Coil”, which employs a tense, rolling percussive line that seems to fit aesthetically with the All Caps releases back in 2011, a nice crisp counterpart to Alex Coulton’s release for the label’s debut. It takes until halfway through the track for the stuttering blips to begin wailing out like a desperate morse code distress signal shot into the far reaches of the galaxy, playing out overtop the galloping chords that sound like an updated version of UK garage producer Sticky’s club creations. While urgency is embedded in every drum kick of the track, there’s nothing particularly sinister about the way that “Coil” unfolds – if anything, the emotion that the track conjures is one of bustling movement, making it an apt choice to throw on your iPod for a commute, should the track ever see a digital release.

But as pleasant as “Coil” is, it’s the tough-to-say-out-loud-without-smirking “Star Frog” track which offers some of the most transcendental moments on the 12″, in a style that the All Caps SoundCloud classifies as #Subterranean. Beginning as a lone, shuffling kick drum, it slowly morphs into a series of bursting dubstep-leaning synth patterns that carry all the psychedelic *oomph* as the images that dance over your eyelids after an extended period of rubbing them. “Star Frog” doesn’t perform the same percussive acrobatics as other All Caps tracks, but Its focus on swishing synth patterns means that it would sound particularly effective when layered under a drum track, like Helix’s “Stacks Riddim”, and though many of All Caps record sleeves have been monochromatic, it feels like the only appropriate colour for this record would be some kind of splattered neon tie-dye pattern.

Closer “Ground Effect Vehicle” is just a minute long, and its desolate, windswept tones feel more like an ambient outro to the record than any kind of cohesive musical statement on its own. With 50% of All Caps’ catalogue having been released in 2014, the label seems poised to continue gaining a well-deserved profile – what exactly they’ll be renowned for, however, seems like it’s constantly in flux.