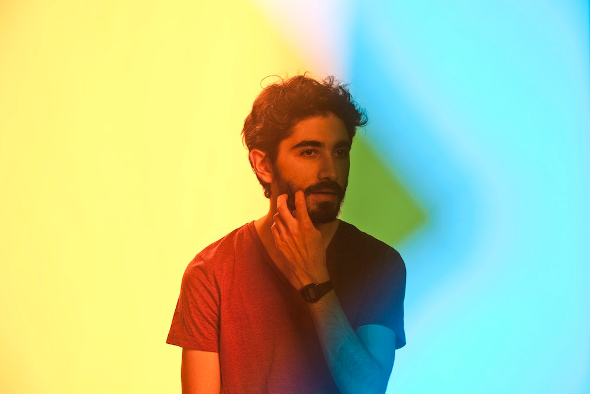 Releases from Mehmet Aslan and CAIN and a 7th birthday celebration in Glasgow are the highlights of a busy few months for the party-turned-label.

The Huntleys + Palmers label looks to be having one of its strongest years to date in 2014. While it only slipped out a single DJs Pareja 12″, debuted the no ubiquitous SOPHIE and issued two edit 12″s via its Highlife sub-label last year, 2014 has seen nine 12″s via both imprints, with the recent debut of Wrong Steps a notable highlight. The label looks to be continuing that trend, with two new 12″s freshly announced on both Huntleys + Palmers and its Highlife subsidiary.

A Basel native with Turkish heritage, Mehmet Aslan (pictured above) will join Huntleys + Palmers after contributing to two Highlife releases. The label first came across Aslan at the Family Affairs party he co-runs in Basel, and was encouraged to develop his idea of combining his Turkish roots with his interest house and techno after H+P boss Andrew Thompson played Rene Bandaly Family’s “Tanki Tanki”. The three-track Mechanical Turk represent’s Aslan’s first original material, and can be previewed below. This will be joined by a sixth Highlife 12″ from Scottish producer CAIN, whose track “Nagan” is described by the label as “Daphni via Delhi.” Both releases can be previewed below.

The label also has a second Various Artists EP planned for December as well as a host of parties planned for the year, including a 7th birthday celebration in Glasgow on December 19 featuring Talaboman, Auntie Flo and Esa. In order to get a little more information on their activities and to find out a little more about the running of the label, we asked Huntleys + Palmers boss Andrew Thomson a few questions.

You just played a Huntleys + Palmers night at Berghain’s Kantine. How do the H+P parties go down in Berlin compared to Glasgow and London, and how do you find things compare in Berlin in general?

I only put on a few parties in Berlin during my time there so maybe it’s a bit more difficult to compare to past experiences. Perhaps ironically, that was the point of moving there in the first place, to avoid parties. Despite there being great options to go out I tended to find that when I had a weekend free, I would avoid clubs entirely. I’ve had some excellent nights out though and have really enjoyed seeing past guests like James Holden or Traxx in the Panorama Bar without having the usual promoters concerns and really get to enjoy their sets. Away from Berghain, I found myself at Renate pretty regularly, they have a great booking policy and Ohm is maybe my favourite small venue in the city. I never really got used to the idea of everyone leaving before the music finished though!

You’ve been spending a lot of time in Berlin recently – how has this affected the workings of the label in terms of finding new artists?

The label has always been conducted remotely to some extent. Even from the outset, it started when I was living in London and Brian (Auntie Flo) was in Glasgow so there has always been a lot of going back and forth over the phone / email / Skype. I only met (Argentina-based) Carisma in Berlin for the first time a few weeks ago – which now means I’ve finally met all the label artists, something I feel is important. In terms of finding new music, most of it happens pretty organically from meeting friends through parties, gigs or friends of friends and then spending some time sharing ideas after that. I’ve just moved back to Glasgow as it happens, so the distance continues..

H+P is a label and party that always operates on a totally unique parallel to the more hyped strands of house and techno. Do you find this makes running H+P an easier or more difficult task?

Pretty easily I think. I’ve always been excited by new music and tend to operate at the forefront with emergent artists and labels, I guess over time I’ve learned to look for substance beyond the hype. Not to suggest that everything hyped up lacks substance, but maybe there is something personal missing once a certain level of interest has been attained.

The Highlife sub-label was started last year alongside H+P. Could you explain a little more about how it operates and how it fits into the H+P ethos?

I guess the main distinction is that Highlife is essentially a vinyl only edits label. While H+P enjoys the freedom of being pretty much able to go in any direction, Highlife is much easier to define. The label was born out of the Glasgow based parties, which focus on and explore Afrofuturism and the various strands of electronic music happening around the world. We started in Glasgow almost 5 years ago and it was like nothing else that had happened in the city before then. As such, it didn’t take long to develop an audience and once we started the label, we began making connections elsewhere with other like-minded outfits and producers in different cities. The ethos is similar in terms of having an output of high quality underground music, but there is maybe more of a set agenda behind ‘what is a Highlife track?’ Which is funny thinking back, as we used to have the same discussions about whether such and such is a Highlife guest.

Can you give us a bit more detail about what’s coming up for the label in terms of releases and parties?

Plenty on both counts! We’ve just announced the next series of Thursdays at Plastic People, which will take us up to the end of the year. I’m pretty pleased with how they’ve come together with a few returning faces, regular parties and brand new ones. Then it’s the H+P’s 7th Birthday in Glasgow with Talaboman and Highlife.

On the label front; until the end of the year, there is of course the Mehmet release which is a cracker – maybe something like Talabot meets Barnt via Istanbul. He’s just released on Ata’s For Disco Only label too, so it’s great to see him getting more attention elsewhere. Before that, there’s a new Highlife by an artist called CAIN who has previously played for us before and his track “NAGAN” has been getting a great reaction all summer. Then there will be H+P Chapter 2, which picks up from its predecessor, although this time around, there is a bit more of a collaborative vibe between some of our favourite labels and their associated artists – Comeme, Studio Barnhus, Optimo Music, etc.