Anthony Child recently revealed on his own blog, Back In The Grinder, plans to launch a six-volume Surgeon reissues label called SRX. Inspiration to create this new outlet arrived after rummaging through his personal collection of DAT tape music, and Child writes, “I was shocked to find how clear and dynamic many of my early tracks sounded, not the way I remembered them from the vinyl releases.” This first SRX reissue, simply titled Surgeon EP, finds the producer revisiting his debut record, the Magneze EP, released on Downwards in 1994. 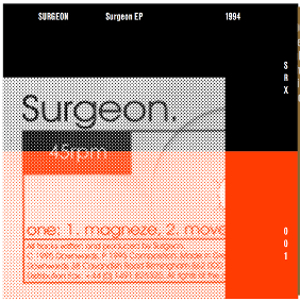 The record is now 20 years old and Child explains his music from around that time was mastered and cut by people who had no (to little) understanding of electronic music. “I actually remember cutting a dubplate back then and being asked if my track was ‘supposed to sound like that?’” Child says. “The engineer was so disgusted at my music that once the cut started he left the room until it was finished.” Two decades on, techno and Surgeon couldn’t be more loved. Since 2010, however, the pace of Child’s solo output as Surgeon has remained glacial. He’s released the two records, Compliance Momentum on his own Dynamic Tension label – featuring the wonderfully, Google Translate-aided track name “The Crawling Frog Is Torn And Smiles” – and one of Token’s best records Fixed Action Pattern.

Apart from these, Surgeon filled the A-side of Semantica’s 50th release (DJ Skirt’s “Hymen” made the B-side) in 2012, while he’s also been kept busy revisiting his British Murder Boys collaboration with Regis, developed the Trade project with Blawan, to remixing Livity Sound, and playing ambient sets at this year’s Freerotation festival. Further off piste, Child has joined artists such as Laurel Halo, Keith Fullerton Whitman and Oneohtrix Point Never in exploring The Space Between People and Things for the experimental label NNA Tapes.

SRX001 just about marks year dot for Downwards enthusiasts and Surgeon devotees, while for later arrivals the Surgeon EP, particularly “Magneze” and “Argon” cuts, should provide a refreshed take on what original UK techno from the ‘90s sounds like – only better thanks to Christoph Grote-Beverborg from Dubplates & Mastering in Berlin. Of the four tracks it’s “Atol” which feels most contemporary by today’s standards, and if techno clubs are where you find yourselves often, then you’ll likely be familiar with this production whether you know it or not. While lastly, it’s nice to imagine the seething arpeggios and Robert Hood-like snares of “Move” as the original agitating force behind the disgust of those aforementioned mastering engineers. Dynamic tension? Absolutely.