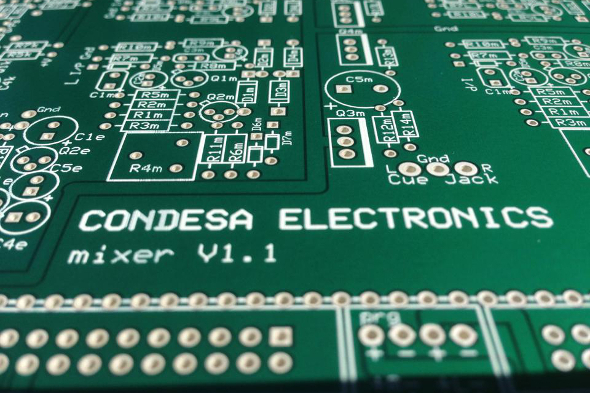 During a conversation with Tyson Ballard in a newly refurbished Brick Lane bar still scented with the smell of fresh paint, the entrepreneurial half of Condesa Electronics tells his part of the young company’s story. Several ales in, the Australian spins anecdotes of Tiffany diamond dealers in Shanghai and couture watch festivals in Basel, to DJing in Dubai and other adventures in Edinburgh with Linkwood. Furthermore, our conversation revealed the inspiration behind it all, La Condesa, a quarter of Mexico City popular with young fashionables not too dissimilar from the area of east London where we’re drinking tall pints of beer.

Medhi El-Aquil on the other hand is the Australia-based, England-born tech head of Condesa Electronics. Our long-distance phone call covered the nuts and bolts of the business; transistors, resistors and capacitors, bespoke jarrah and rosewood casings, to the electro, boogie, funk and Street Sound Electro compilations of his youth. Clicking his fingers, El-Aquil, or just Medhi as he’s known, says, “that music amazed me instantly and it was the first time I heard a tape that was mixed… So from that point I was always interested in music and mixing.”

Ballard, founder of the Voyeurhythm label, forms Condesa Electronics with Medhi, a boutique DJ equipment manufacturer exporting mixers and equalizers from the quiet suburbia of Adelaide in South Australia. Their marquee product, the Carmen, draws inspiration from the older Bozak and E&S designs, old-school rotary mixers famous for their use in clubs like Nicky Siano’s Gallery, Studio 54 and Larry Levan’s booth at The Paradise Garage – and today by DJs like Theo Parrish and DJ Qu, and DJ Harvey when he’s down under, as demonstrated below. 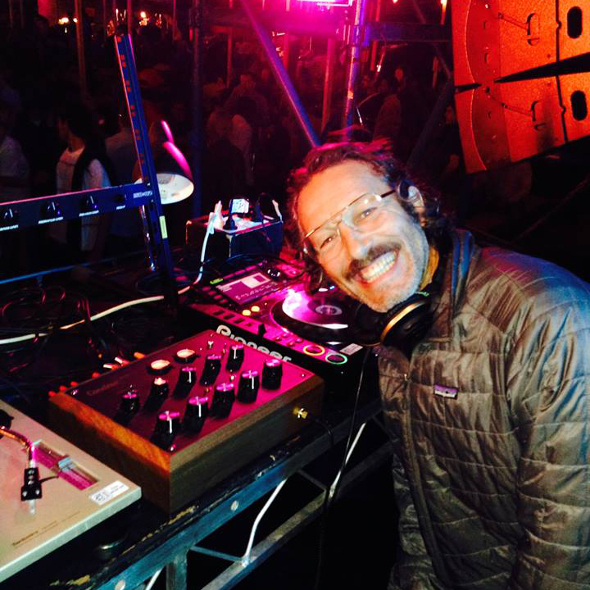 Mehdi has been working with audio, “probably for the last 15 to 20 years,” he says, and remembers, “I used to scrap together old turntables and try and build mixers with some of my electronics knowledge or do double tape machine mixes.” Following his completion of an electronics apprenticeship in London, Medhi tells, “I set up a lot of soundsystems, installing them, repairing anything to do with them,” and adds, “I’ve put a lot of mileage into electronics and I’ve always designed little circuits and repaired stuff.”

Relocating to Adelaide, Medhi explains, “there aren’t as many soundsystems around, I have done a few though, Cuckoo and Sugar, I look after them, but being here I’ve just focused on building more equipment and doing repairs and some maintenance.” It’s Sugar’s Bozak mixer which Medhi services and he says, “it just struck me how amazing it sounded and it just felt special to DJ on a mixer like that; it’s a bit of a pleasure, and I know some DJs out there who cuss and say ‘bloody hell I hate that mixer’, but for me the experience was always good and that was always an inspiring thing.”

Relating the Bozak to his own designs, Medhi says, “it can be harder DJing (on a rotary mixer/Bozak/Carmen) for some people, but the more you work with it the more you get used to mastering the volumes, to finding the breaks, to changing the tunes over; it’s a just a different way of working a set.” People have requested crossfaders on some of Condesa’s designs but as Medhi expresses simply, “it’s not that kind of mixer.”

“The Carmens are very simple,” Medhi says. “They don’t have many bells and whistles, they only have a bass and treble EQ across the master and everything else is very simple,” he explains. “I put split cues in so you can listen to the master in one ear and the track you want to cue up in the other ear, but you can’t cue both at the same time so a lot of younger DJs are saying, ‘well how do you mix if you don’t have EQ per-channel and how do you mix if I can’t cue two things at the same time?’”

“A lot of modern mixers, when you move the fader,” Mehdi continues, “you aren’t moving the sound through that fader, you’re moving a voltage which controls the amplifier which opens and closes the sound.” Mehdi explains further, “the touch and movement to what you’re hearing is slightly disconnected,” and, he says, “the digital mixers are even worse; even the Allen & Heaths, the volume controls a voltage controlled amp, so you’re not moving the sound, you’re moving a voltage.” But on the Carmens, Medhi delineates, “when you move the rotary fader the sound is on your finger tips, it’s going through that fader, so it’s very precise; you move it a couple of millimetres and you can hear the difference, it’s much more tactile.”

The pair’s paths crossed when Ballard visited his home of Adelaide for a short period of time and needed some equipment fixed. “I think I had a Wurlitzer in my studio,” Ballard says, “and everyone was like, ‘you gotta talk to Medhi’,” In the usual Adelaide way, Ballard explains of his first meeting with his future partner, it wasn’t just, “drop it off and give me an invoice,” but, “come around for a spliff and a six pack of Coopers, hang out and I’ll repair your Wurlitzer.” The two kept in touch and after Ballard’s light blub moment of, “why don’t we think of a name, change up the design a little bit and then do our own; start our own company,” the business was set in motion and prototypes were made, tested, even sold.

“On eBay there’s all these clones; a 303 clone or a 909 clone or 808 clone – and Medhi was like, we should do a Bozak clone,” tells Ballard. Medhi affirms: “Tyson and I made a decision from the beginning; the Carmen wasn’t going to be made to mimic a professional product: it is a professional product.” So the Carmen was born. “I started thinking about circuits and designs and I started putting together ones that were my own take on those vintage mixers,” Mehdi remembers. Meanwhile in London, Ballard unobtrusively imparts, “the sound is equal, if not better, of the rotaries they had back in the day,” and adds, “in terms of building them we’ve always said we want to use the ‘Rolls Royce’ of parts and we want to use original wood.”

Ballard, however, is quick to assert: “In terms of sound quality it’s really hard to beat the old, original Bozaks.” And with the Carmen, he says, “we’ve tried to source as many of the original parts, so we found similar knobs in terms of grip and size,” he explains, while pointing out, “the big difference is the Bozak is a rack mount, whereas we’re a desktop mixer.”

“We had cases shipped from the US or EU for the first few mixers we had made but now we’re starting to use recycled Australian woods, so we’ve got jarrah and Tasmanian oak,” Ballard says. Now, all of the Carmen’s casings are made by a local cabinet maker, says Medhi, and “we have actually been using recycled and sustainable hard woods,” he adds. “We’re trying to use recycled timber for a bit of identity and firmly plant that they’re made in Australia,” Ballard also says.

“There’s a thing called discrete circuitry,” says Ballard relating our conversation back to the Carmen’s inner-workings. “If your mixer is 100 per cent discrete, which the Carmen is, there is less distortion, and a better dynamic response,” he says, “it’s very hard to get that in a chip.” To the best of Medhi’s knowledge, the Carmen is the only discrete desktop DJ mixer currently in production, and he says, “the advantages of discrete audio circuit over a microchip-based circuit are all the discrete components are hand-picked for the best audio performance; also negative feedback that is a commonly used in integrated circuit to control gain, is kept to a minimum in the Carmen’s discrete audio circuit.”

“So the differentiator between Condesa Electronics and everyone else’s mixers,” Ballard sustains, “is we are built by hand, built with soldering irons, and we use a circuit which is closer to the original Bozak design.” Keeping the technical wordspeak to a relative minimum, Mehdi further explains, “older mixers will have some decent valve circuits or some proper transistor circuits, or some original old school circuits, they give something to the sound that a lot of the modern equipment doesn’t.” Medhi continues: “Basically the discreet circuitry (on older mixers) is really individual, and for the balanced outputs (on our mixers) we use transformers which is kind of old school,” he says. “Its old school 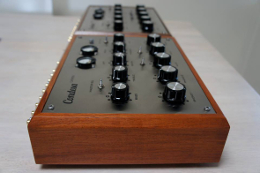 technology that’s not used much, there’s a little bit of sonic quality to it and it’s a bullet proof thing.” Medhi says the up shot to dealing with the “inconvenience” of old school technology is, unsurprisingly, “it sounds better.”

“There are a few rotaries which are made, but the E&S is the industry standard,” believes Ballard. “So for us to make a footprint into the market we went quite a lot cheaper than the E&S,” he says. Ballard laments, “all the mixer names are like DJM800, it’s so impersonal,” and with a wry grin he reveals, “my mixer, my turntables, my drum machine, my synthesizer, it’s a like a lady, my second love, so I was thinking why don’t we name the mixers after Spanish women?” Moreover, I’m told, the inspiration further materialised when Ballard was in Mexico after watching From Dusk till Dawn.

Condesa Electronics doesn’t only have the one product; there’s also the heavy duty Allegra rack-mount mixer and a new desktop mixer similar to the Carmen called the Lucia the pair are currently readying for release. “I always feel like I’ve got a relationship with each mixer,” Medhi says. “Because of the time it takes to build it, putting it together, a listening test…” he says, before pausing. “I think it’s always essential to have a little mix on there too to make sure everything is working the way it should,” Medhi says. “I always want to leave it on for a while, leave it on overnight, make sure nothing goes purple, nothing goes bright in it, and just keep listening to it.”

For the moment Condesa Electronics remains a small but growing endeavour, and in London before we finish our interview and final mouthfuls of lager (and discuss where we’ll head next), Ballard, with sincerity, says, “I guarantee you the rotary mixer we make is made with love and ten times better than what you’ll get on a crappy mixer that’s made in China that comes from a factory of people that don’t even DJ.” Instead, as I found out, a fully constructed Carmen comes from Medhi’s quiet studio space in South Australia, assembled by someone that says: “I couldn’t afford to buy a Bozak outright so I just thought; well…maybe I should just make one.”

Check out the Condesa Electronics range on their website