In a recent R&S Records profile, it was revealed that label founders Renaat Vandepapaliere and Sabine Maes quite literally gave up their careers for a pile of horse crap. Frustrated with the politics of their 90’s major label merger that transformed their passions into a suffocating 9-5 job, the couple escaped the tightening noose of major label bureaucracy by dropping everything and moving out into the country to breed equines (and shovel up after them). Moving out into the country might seem like an incompatible move for a duo that founded one of the 90’s most influential techno labels – after all, dance music has long been the sound of busy industrialism: New Jersey’s mechanical two-step garage house patterns, New York’s blaring bodega radio jams, and the soulful but repetitious thump of Detroit techno. 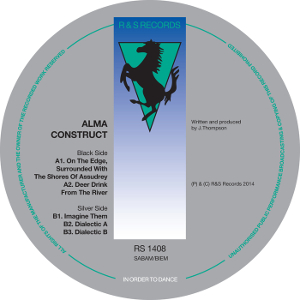 But when R&S rose again in 2006, something had fundamentally changed – the impact of the countryside seemed to have embedded itself in the label’s tastes. It might be hard to trace at first – but Lone’s “Airglow Fires” always evoked damp forest floors and outdoor festivals just before dusk for this writer, and James Blake’s early productions on the CMYK EP had a spaciousness to them that seemed uncontainable by club walls.

While R&S still makes music reflecting the industrial corners of the globe (Tessela’s bludgeoning “Rough 2” and Paula Temple’s scratching, screeching “Colonized” as two recent examples),  this writer has been most interested by their more organic output, exemplified by their latest singing of 19 year old Alma Construct (Josh Thompson). While Thompson’s music isn’t particularly inspired by nature (instead, it draws influence from French filmmaker René Laloux’s 70’s sci-fi epic La Planète Sauvage), it’s a remarkable debut for Thompson, one which weaves samplers, tape machines and guitar pedals together into a wholly organic tapestry.

Opener “On The Edge, Surrounded With The Shores Of Assudrey” refers to a fictional location – or at least one that’s not on any contemporary map. However, Thompson’s open-ended warm keyboard pulses, punchy drum work and radio-scrambled vocal samples calling out the word “you” in various pitch adjustments  all successfully paint a panoramic vista of a geographic locale – somewhere seaside, rock-covered, windswept and perpetually grey. Call it pitched down Leon Vynehall with an extra dose of sentimentality; a track which switches tone with a minute remaining to purposefully fade out in the slowest manner possible.

“Deer Drinks from the River” is akin to a Willie Burns recording getting dental work – skull-boring tones and noise fill up the track’s first half, countered by unsettling operatic tones in the second half.  “Dialectic” pits a shrieking electric drill against sweeping drawn out ambient tones – beginning as a feedback-laden nightmarish rendition of Hank Jackson track “Cole’s Lullaby”, its atonal howling sounds disturbingly human. But the two conflicting elements of the track collide with each other halfway, subduing the former aggression until the dominant sound is a peaceful, melodic synth line drifting through the air. Barely clocking in at over two minutes, it’s a jolting reminder of how much momentum can be accomplished in minimal time.

“Dialectic B” takes its time to unfurl, starting as a sputtering, hand-tapped drum pattern which unfortunately, is the one track that doesn’t really reward the listener with much of a payoff for sticking through it.  “Imagine Them” takes subtle cues Portishead’s “Machine Gun”, evoking that old 90’s trip-hop aesthetic with its erratic drumming, but adding Motor City Drum Ensemble’s barely-there piano-based flourishes throughout. While it’s a complete and cosmic track on its own, it’d sound especially relevant with a vocalist working some magic overtop (FKA Twigs comes to mind as a worthy candidate).

While Thompson demonstrates excellent stylistic proficiency throughout, the only question about these Alma Construct tracks is where exactly they are supposed to take you. Disjointed and discordant at times, it’s not the type of record that will garner a screaming crowd in the club. However, it demonstrates a mature, cohesive vision of dance music, one that’s not afraid to deviate from norms and spend some time experimenting against the darker fringes of the club spectrum. Whether or not Alma Construct becomes the UK’s next fledging producer or not, Vandepapaliere and Maes likely don’t give a horse’s ass – they’ve seen the label through two decades of innovation, and even if they’re situated out in the wilderness, they’re hell bent at continuing what they’ve started.

A1. On The Edge, Surrounded With The Shores Of Assudrey
A2. Deer Drink From The River
B1. Imagine Them
B2. Dialectic A
B3. Dialectic B