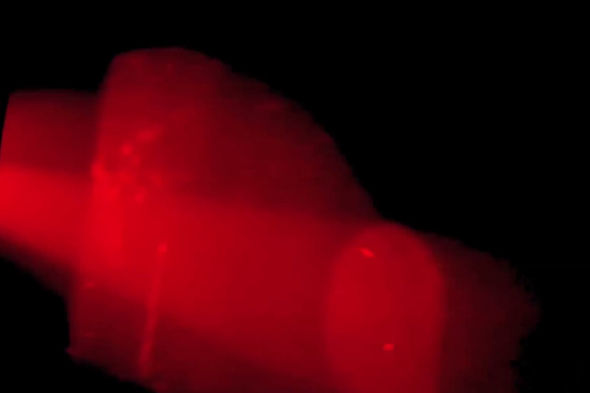 Take in Spatial’s Primitives, a multi-faceted light, sound and coding project to be released on vinyl and DVD through the Broken20 label.

After releasing a stream of tapes, DVDs, digital releases and custom made USBs, Broken20’s move to the vinyl format is, “more than just a slab of wax,” the label say. A press release explains Primitives, a performance, vinyl and DVD release,was born when Infrasonics label boss Spatial devised an installation of light and sound by coding his own software, exploring what’s been described as the OpenFrameworks platform. Spatial explains he sought to investigate the materiality of light, sound and space manifested within the digital domain. He elaborates the idea was to, “explore sonic and optical intensity articulated by simple geometric figures and extreme frequencies,” and by doing so Spatial hopes to bring, “new realisation to the relationships between seeing sound and hearing colour.”

Recorded live, the visual element of Primitives used various camera shots which were split into a number of short visual works that are said to liberate the software from its digital domain. The DVD component of this Broken20 release contains a series of live, improvised audio-visual art works under two distinct sections: Single Channel and Expanded. As for the music, a 12″ featuring the original Spatial interpretation of Primitives is reinterpreted by a clutch of like-minded artists in Bass Clef, Sculpture and Broken20 founder TVO. The music itself is yet to surface but you can try and wrap your head around the concept by viewing the video below.

Broken20 will release Spatial’s Primitives as a 12″ and DVD on October 20.