If there’s something I love about what Dark Entries are doing these days it’s the labour of exposing the raw, creaky, rusty sounds of bands which ended up sounding quite polished in their later career, putting on record what we often only heard on CD in the ‘90s ‘first wave’ of reissues. Uno by Kirlian Camera is one such example, shedding light backwards onto a band which has changed many guises since its first efforts, a band which has always been difficult to pin down: industrial moments have followed neo-folk ballads, they have alternated trashy EBM and elegant martial tales, guided by droney sounds or decorated with sparkling electronic bleeps. 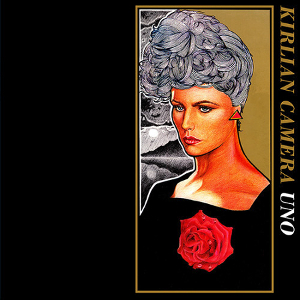 The thing with Uno, and the reason you have to listen to it even if you think Kirlian Camera are a bunch of deluded tasteless brutes, is that all of that spectrum is audible here. What is also audible here is that they were so young and already so masterful. It’s essential listening for anyone who finds themselves drawn to any kind of dark synth, past or present or future. And to be honest, it’s all three of those things. Uno contains Kirlian Camera’s first mini-album released on Italian Records in 1981 (and it’s very Italian Records: you don’t know where it came from you don’t know where it’ll go) and the archival recordings dated 1979-1981 which made up the first demo. If I were to flash-review it I would say: a motorway, a forest, some red lipstick. In reality, of course, there’s a lot to those images.

The record has the heartbeat of Italian darkwave, the angularity of German basements, the youthful despair of French coldwave. But it’s more than that because it’s a very personal kind of darkness. Though young and relatively hesitant, it seems Kirlian Camera had already decided on a few mantras – they were already unafraid of the monumental, and they already effortlessly married solemnity and melody. They were also already experts of the theatrical capacity to scare: the palette of all the songs on Uno is savagely dark.

This Dark Entries edition charmingly contains both versions of “News”, one of Kirlian’s first releases. Behind the mysterious title lies a vexed ballad of nihilist isolation, which in its ‘embryo’ version is even more enjoyable because it’s so spiky: the rough electric guitar creaking in the background suits it well (‘I hear the echo of the news in presence of the warlords’). The other tracks from the first EP, “No-One Notices Them, Rays and Autumn Room” display a change of tone at every corner, but the atmosphere, the exasperation stays in a similar vein. All these songs are almost ‘goth protest songs’, if we could say that such a genre ever existed: they all have the gloominess of the pre-disappointed, of the already-disgusted, of the unrelentlessly bleak against a freezing, sparse, ethereal electronic landscape.

First Kirlian Camera vocalist Simona Buja carries most of the tracks on the first part of Uno, and her voice is perfect because it’s a wise, opaque, adult female voice. She never gets lost in the frozen synths, in the grand dark corridors of the music – she’s always leading somehow, always cold-blooded yet present, real. In “Autumn Room” the first working of the more famous “Blue Room”, she foreshadows the more melodious Kirlian Camera to come; in some of the demos on the second part of the record she’s a sort of Italian Dietrich rallying a ‘Europe sleeping under the rain’. She’ll remain in your memory as she cynically croons ‘I know many men have the same face but too many men have the same ideas…’ on the splendidly spectral “No-One Notices Them”.

Part Two of the LP is full of rough diamonds: off-centre pieces that sound more like ‘studies’ and which are a joy to hear because they’re so free, so interesting, so curious. Classic-to-be still, stark, sweeping synthscapes open up at times onto gorges of sonic experiementation with other colours. Plasticky pulsating rhythms (“Myth” is exemplary goth gloss) are succeeded by severe, bold, rolling martial percussions (“For a Different Moment” and “Observers” have drums which crash to the ground like blocks of concrete). On Unknown and on the very short but very majestic “Last Lights Near the Highway” we hear a riotously distorted Angelo Bergamini delivering monologues of screaming angst in an impossible fugue of echoes and alarm bells, placing us right in the middle of a nightmare. “Minitech”, recorded in 1981 and pressed by Dark Entries onto gold-stamped flexidisc closes this brilliant show. Paranoid, skinnier pulses and reverberating beats seem to already contain the ideas of much later records like Still Air or Pictures from Eternity.

Dark as hell, coldly passionate, Uno really is a motorway, a forest and some red lipstick. In fact it’s a performance, with red lipstick, in a forest or on a motorway. If you like the sound of that kind of thing, you’re going to love it madly.