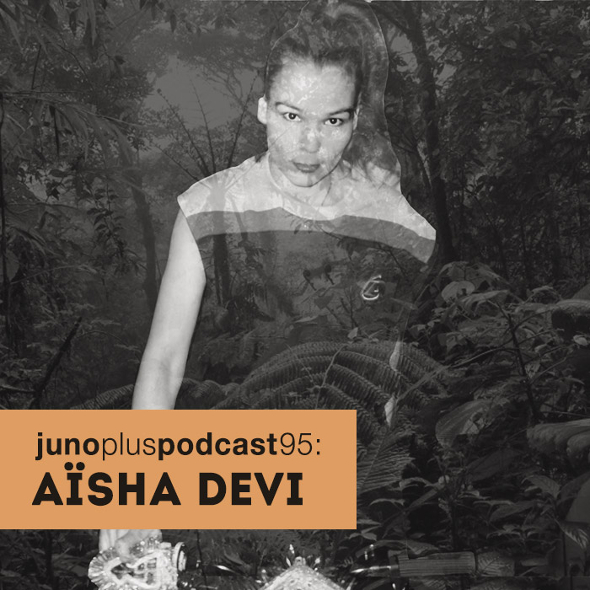 If we could pick the most unique club track we’ve heard this year so far, it would probably have to be Geneva-based Aïsha Devi’s “Throat Dub (Tool)”. Consisting of nine minutes of Devi’s gutteral vocals processed and layered into something intended both as a DJ tool for the more adventurous selectors, and as a piece of meditative electronic music, it’s a track designed to function on two very different levels. It mirrors the “ritual music” philosophy of her Danse Noire label, one that recognises the importance of dance music’s most basic function, but one that also aims to bring a little transcendence into the club space with its heady, visual approach.

Devi’s work with Danse Noire and her concurrent solo productions feel like the logical next step in her musical career; under the Kate Wax moniker Devi released several albums and EPs for Mental Groove and Border Community between 2006 and 2012, weaving, moulding and stretching her voice around electronic frameworks both fragile and robust. She has since found kindred spirits in experimental Italian synth artist Vaghe Stelle and Algerian-born El Mahdy Jr, both of whom have released on Danse Noire following the label’s inception last year. These artists, alongside carefully selected remixers like Cooly G, Hieroglyphic Being, Killing Sound, Nguzunguzu and IVVVO, all give the impression of a label inspired by the outer fringes of experimental dance music, and one with an open approach to genre.

With a unique outlook and a string of strong releases, we thought it would be a good idea to invite Devi to contribute to our podcast series in order to get both a better understanding of what her musical outlook is at the moment, and to let Devi put the Danse Noire philosophy into context across a mix. Titled Luv Extase II, the resulting 71 minutes is described by Devi herself as a “hybrid zone” that merges “current and secular music” to create “a kind of a third territory,” roughly translating into a journey drawing connections between techno, grime, ambient, high resolution club tracks and other more regional musical forms.

As well as taking in several of Devi’s own productions alongside recent and forthcoming Danse Noire material from IVVVO and Niki Tiphticoglou, she even manages to work music from Arca, The Haxan Cloak and Dean Blunt alongside music from Juno Plus favourites Lakker, M.E.S.H., Slackk and TCF. The result is a set that remaps the club experience in a similarly exploratory way to Berlin’s Janus collective or Fade To Mind’s Total Freedom, albeit approaching things from a darker angle. As well as asking Devi about the intentions behind her podcast, we also took the opportunity to ask Devi a few questions about her work and plans for the label.

You formerly produced under the name Kate Wax. What prompted the impetus to start again under your given name?

Inner mutations, the urge of a united self and a connection with my Tibetan/Nepalese origins.
I’ve actively been looking for my father for two years, and that identity quest took me away from Kate Wax’s persona. Also she has been a very bitchy friend, we wouldn’t go to the same clubs anymore.

How have you found the change from releasing on a comparatively big label like Border Community to self-releasing your own material and running a label?

Changing my name was the emotional and personal response, creating the label was more of the intellectual impulse. I was bored of the individualistic process and came to the point where evolution would be more fun and relevant in a collective effort. The label is our utopia. A free space to experiment, share, spread ideas. It’s also a political output, to defy mass culture and raise a finger to any kind of tyranny.

You describe your label as “ritual music”. Can you explain a bit more about what that means to you and how it relates to the club space?

Clubs are modern temples. We gather, we reach different states of consciousness in a collective dynamic. It’s a contemporary replay of cults and human processions. The damage is when music business and DJs use this hypnotic power for branding purpose/mass control. There’s still DJs putting their goddamn arms in the air, so you know who’s the boss. Fuck this! I want the club to be hierarchy free. A lucid trance.

Your own music features a lot of intriguing use of vocals. What is it that you enjoy about exploring the human voice in such a way?

I’m obsessed with voices, fascinated by the physical impact that voice frequencies have on both body and mental. But I hate my voice, I wanted a male voice, so I use it more as living matter, stretch it, tear it apart. I’m also using more and more meditation tools such as humming and throat singing. I’m a subwoofer.

Your label has had releases from yourself, Vaghe Stelle and El Mahdy Jr so far. Given the very specific ethos of the label, what kind of thing do you look for in artists to release on the label?

I’m looking for weirdos with an old soul. Misfits who found an output through music, regardless of the genre.

Your mix came with a title: Luv Extase II. Is there any particular significance behind this?

The erotism of enlightenment.

What kind of vibe were you going for with this mix?

A hybrid zone, by merging current and secular music. a kind of a third territory.

It feels like the past few years have seen more of a willingness to experiment in terms of the kind of things people are willing to play and listen to in clubs. Would you agree that things have become more open since you started DJing?

Yeah, now entertainment has come to such a self-referencing point, the only way to escape caricature is radicality.

What have you got planned for the label in the near future, and where you want to take it in the long term?

IVVVO is the nearest future. Label nights with new artists and guests shaping up for fall/winter, spiritual techno.

It seems like the club is a very important space to translate Danse Noire’s goals – how do you hope to do that with Danse Noire’s forthcoming parties?

From a certain perspective, we release dysfunctional club music, but to me clubs are the most appropriate place for music that goes back to its ritual function. With the ritual comes the rave.