Jack J – Looking Forward To You

The concept of hype in electronic music seems particularly skewed right now, a burden that labels and artists have to carry that is generally generated, measured and dissected by others; be it general shifts in online editorial coverage, views on YouTube or hiked up prices on Discogs. In the case of Mood Hut, this seems especially true with claims of ‘hype’ out of sync with their low key approach; when was the last Q&A you read with Aquarian Foundation or the last monotonous list dripping with the bitter taste of content from the Hashman Deejay used as a means to promote an upcoming release? 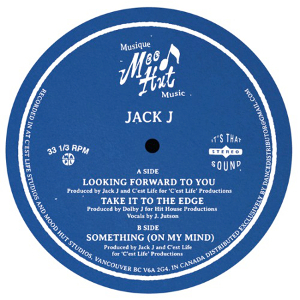 So as they go about their business of putting out music, repping Vancouver at festivals and DJing in a manner that ‘lives up‘ to the hype, Mood Hut’s sixth release by Pender Street Stepper Jack J could be the record that brings the collective a whole lot more attention. This is thanks largely to B-side hogger “Something (On My Mind),” which is perhaps the first bonafide anthem in the making released on Mood Hut. The ten-minute plus track could easily end up being this year’s “New For U”, a production that’s effortless in its simplicity, and one that’s a pleasure to play out.

This may be a review but words will never be as effective in conveying the emotional response to “Something (On My Mind)” as experiencing it in the intended environment. Despite its extended length, this is a track you could never tire of hearing, and there’s also a definite dynamism to the subtle, snaking shifts in melodic emphasis Jutson employs throughout that seems lacking from a lot of what passes for contemporary house these days.

On Pender Street Steppers tracks like “Bubble World” or “Opening”, Jutson and production partner Liam Butler deftly used idiosyncratic vocal tics as integral parts of the sonic DNA; both A-side tracks find Jutson successfully using full-blown vocals. It’s hard not to get caught up in the charms that “Looking Forward To You” has on offer, with Jutson’s doe-eyed vocal riding a wonderfully insouciant arrangement, all elastic basslines tangling over enthusiastic drums. Close your eyes and you can almost imagine “Take It 2 The Edge” to be a forgotten Beastie Boys B-side from the Paul’s Boutique era, with the Dust Brothers surreptitiously recording Ad Rock whilst he croons away in the shower and laying the vocals over a busted boogie beat. It’s delightfully weird and a nice contrast to the gliding B-side.