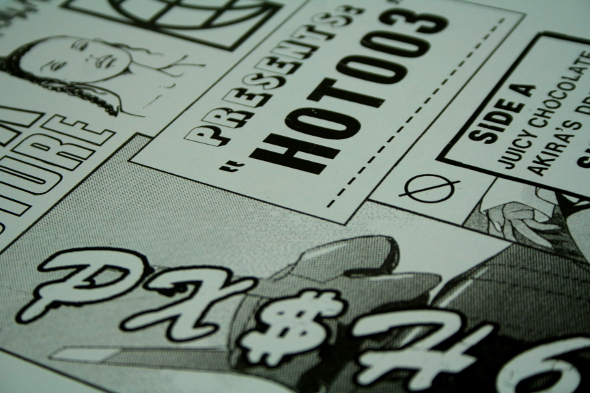 If there’s one thing that London’s House of Trax parties have nailed since their inception, it’s the deceptively hard task of making a good flyer. Utilizing rough-edged aesthetics from late ’80s Brooklyn house label art and borrowing images from Robert Crumb and Keith Haring, their art thrums with a vibrant secrecy –  much in the same way that finding out the local Vietnamese dance studio in your city actually doubles as an after hour club gives a certain thrill. It’s a party whose imagery is familiar enough to be recognizable, while simultaneously promising you something that you haven’t experienced before –  It’s the same feeling one gets when flipping through a used crate of records to find a white label adorned only by weird marker scrawls or a fading handstamp. 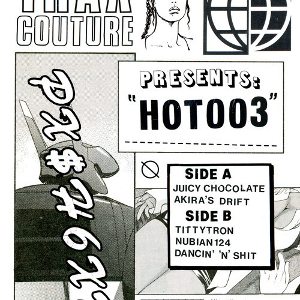 House of Trax’s label arm Trax Couture has sustained that feeling of stumbling upon something special and rare with their first two releases from House of Trax resident DJ Rushmore – brashly confident amalgamations of house, grime and ballroom, their hand stamped single pressing releases accompanied by neon photocopied 8.5 x 11″ sheets of paper reminding you that they are “strictly limited edition”. The third release on Trax Couture comes from PX$H6XD, (or Poshgod, depending on your feelings about spelling in a post-internet chatroom age), a Miami based producer whose identity seems to somewhat rebel against the vinyl purism of the label’s previous releases.

PX$H6XD has released a library-sized volume of music on his own Bandcamp to date, and embodies the confusing fluidity of the internet in a way that only a digital native could. He cites mainstream hip hop icons like Wiz and Kanye as futuristic inspirations, dabbles in speaking French on Twitter, uses weird self-made Manga-inspired art on his release covers, and sports a catalogue full of tracks with titles like “Devil’s Yurin”, “Dildorifle”, and the capitalized-just-in-case-you-didn’t-get-it track, “VAGLORD”. So while the internet-age irreverence that’s embedded in PX$H6XD’s vinyl debut on Trax Couture may clash slightly with the image that the label has curated to date, it’s still an extremely engaging, self-assured offering, cramming five hectic serving of cyber wave club on a single piece of wax. It’s certainly the most jarring interpretation of house music that Trax Couture has embraced yet too.

“Juicy Chocolate” feels like navigating a war field of precariously placed MPC landmines – as the track thumps along, they jarringly fire off – barely sticking to beat, erupting when you least expect them. When inserted in the middle of a set, this retrograde remnant of jacking house is perhaps the most likely of all the offerings on this 12” to prompt chaos in the club with its off-kilter pacing, but perhaps also the most likely to plant a look of displeased confusion on the faces of more conservative dancefloor types.

Given PX$H6XD’s interest in Japanese art and futurist ghetto house, titling a track “Akira Drift” seems fitting – EQ’d in such a way that you’d think the sound engineer had a stroke in the middle of mastering, it’s as abrasively chaotic as a motorcycle getting sawed in half. Beginning with a banging cumbia-leaning pulse, its climax features vocals that sound summoned up from the depth of hell and spit through a cheap webcam microphone – be prepared to see your EQ levels pushing red when you play this one out.

Despite its relatively straightforward structure in comparison to the rest of the EP, “Dancin’ n’ Shit” sports an X-rated vocal line that’d put a smile on DJ Assault’s face; perhaps the most thematically in line with Trax Couture’s previous output thus far. “Nubian 124” cycles through rusty disco house stabs that leave one feeling queasy but simultaneously desiring a rewind – running its course in barely two minutes, it feels like it’s over before it’s even really begun. “Tittytron” is the most Detroit-electro referencing number of the bunch, with glitchy 808 programming that leaves enough empty space between beats to let the track’s rattling cowbell reverberate off the walls.

While PX$H6XD’s varied stylistic inspirations showcase a creative ADHD that can be a bit whiplash-inducing to try and keep up with, HOT003‘s relentless energy makes it a worthy addition to the Trax Couture catalogue. Much like the House of Trax aesthetic of blending the familiar with the unknown, you may feel as if you recognize the club sounds at the heart of PX$H6XD’s catalogue, but the real excitement in them comes from their belching, unapologetic weirdness.