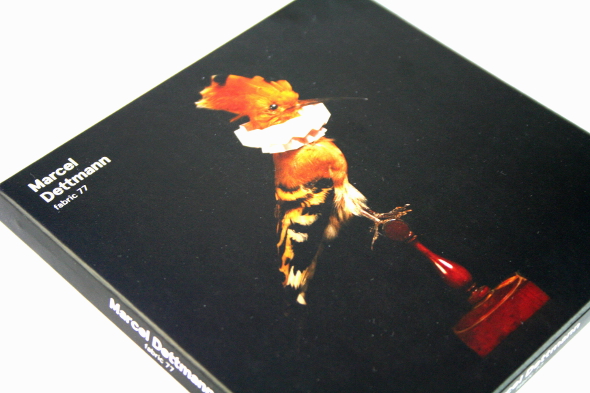 I’ve seen Dettmann play overtime to an empty club of 15 brave Australians (including bar staff) on a cold Thursday night in Adelaide. I’ve had him outlast me at Berghain, I’ve witnessed him power through 10-straight-hours of 130BPM techno with Ben Klock, and I just saw him play back-to-back with Luke Slater at this year’s Dekmantel Festival. If there’s a DJ I can trust to helm two turntables, some CDJs and a mixer, it’s Dettmann. With the future of the mix CD uncertain, it’s nice to know there are still DJs out there with the ability to rustle up excitement around the release of one. Fabric’s storied series has become the mix CDs main faculty, and Pangaea’s complete thrust into techno music and Move D’s housier edition have kept fabric’s tin packaging in production for another successful year.

But back to Dettmann; he’s a name (maybe even household in Berlin) that basically spells: techno. He’s now as synonymous with the genre as Juan Atkins, so if the mix CD did need saving this year, it’s Marcel, with his Nike trainers and blonde mane that I want to see do it. What separates Dettmann’s DJing from his contemporaries who share the ability to sustain long haul sets – DVS1 and Ben Klock – is funk. It’s these vibes that give his sessions a feeling of effervescence akin the rising bubbles in a soft drink, poured with the right amount of fizz without overflowing the top. Dettmann’s sets have the ability to raise your energy levels over an extended period of time as opposed to taxing them with lashing hi-hats, exhausting arpeggios and extended melodies.

Ryan James Ford, a name that should be new to us all, opens Dettmann’s mix with the atmospheric rumble of “Arthure Iccon”, one of the many unreleased MDR productions to grace fabric 77. A steely cauldron of tension is then released and twisted into funk with the regimented drum pattern-swing and dub-tinges of Jesper Dahlbäck’s “Sun Position” from his rejuvenated alias, The Persuader, who released a slew of 12”s for the Svek label in the late ‘90s. At only four-and-a-half minutes into the mix and trust is already established.

After being put in charge with one of Ostgut Ton’s first Berghain mixes in 2008, and contributing the Conducted mix for Belgian label Music Man in 2011 – his podcast of EBM for German magazine Groove is an absolute peach too – Dettmann is no stranger to the mix format. The first hands up (and wolf whistles if you can do them) moment of fabric 77 comes in around the 20-minute mark when an uplifting vamp of synths from a unreleased Answer Code Request track gives way to the dubby Jamaican chord progressions and village drums of Dario Zenker’s also unreleased “Nearlin”, which sounds like a mechanical interpretation of Michael Jackson’s “They Don’t Care About Us”.

It’s here Dettmann politely reminds us that techno, in all its ferocity, can be full of life and good fun. Berghain isn’t just about dancing bears and what lurks in the dark. He does of course send the mix into cavernous territory by the way of Robert Hood’s “Film”, the celebrated Detroit producer’s first original production as Monobox in ten years. Deviating slightly with a sprinkle of modern day EBM through “It’s Not The Point” by FBK (another name to look out for), it’s Rod (aka Benny Rodrigues) who sends fabric 77 into the red with “RSPCT”, which leads into the sinister boil of Raster-Noton co-founder Byteone’s remix of “Radar” from Dettmann’s surprise second album.

Exhuming us from the deep is the minimal chords, keys and bass of Dettmann’s own remix to Carl Craig’s “Country Boy Goes Dub” as Paperclip People, and from here on in until the melancholic hyper-coloured closer of Vril’s “Torus XXXII” (that’s two official Dettmann mixes the Giegling producer has appeared on) from his impressive debut LP, Dettmann provides a personally guided tour of forthcoming MDR material. Earlier this year UK bass artists Pinch and Mumdance released a 19-track mix that Scott Wilson described as, “twisting techno, hardcore and grime into dark new shapes.” As linear as fabric 77 seems, the same could be said about the 19 techno selections chosen here. Dettmann may not go as far to showcase a bespoke back catalogue as what Ricardo Villalobos and Omar S did for their fabric mixes, however, it does prove that techno in the right hands will never get boring. So with all the background knowledge of Dettmann’s career and DJing prowess, as if this mix was ever going to be bad.