A further round of names added to the Atonal festival 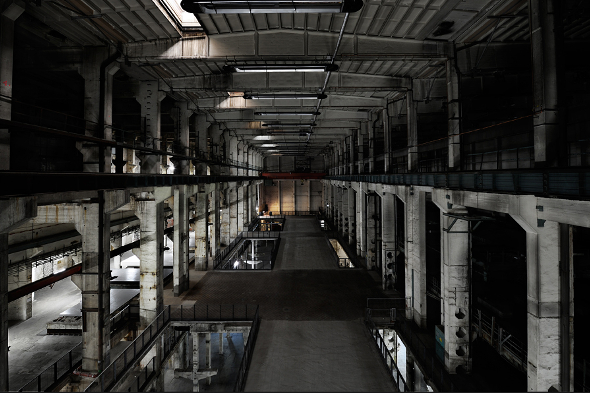 With Max Loderbauer, Shapednoise and Fis added to the Atonal lineup we speak to the festival organisers about what to expect.

From Wednesday onwards next week, cavernous Berlin space The Kraftwerk will play host to an illustrious cast of electronic musicians as the reborn Atonal takes shape. Back in June, the festival organisers revealed the first round of line-up announcements with Ensemble Modern’s scheduled performance of Steve Reich’s Music For 18 Musicians the headline draw amidst the likes of Source Direct, Millie & Andrea and In Aeternam Vale. Last month Atonal added further names to the line-up with a veritable coup secured in the form of Richard H. Kirk agreeing to perform Cabaret Voltaire material for the first time in two decades.

Atonal today revealed another batch of names to perform across the four days with a live performance from Villalobos and Tobias collaborator Max Loderbauer added to the main stage proceedings on Saturday. Repitch Recordings founder Shapednoise will play at Tresor as part of the aftershow entertainment on Saturday and Tri Angle artist Fis will be DJing the Closing Party at OHM with additional guests. It seems that a further announcement regarding line-up additions will be made next week before the festival commences.

In order to give a better understanding of the festival, it’s organisers, Laurens Von Oswald, Harry Glass and Paulo Reachi, were kind enough to answer some questions.

Why was Berlin Atonal resurrected after a 23 year hiatus?

Well the idea to resurrect the festival came from Berlin Atonal’s original founder, Dimitri Hegemann. He was looking for someone to take the festival and give it new life. It was something he had been contemplating for a long time and I think there was a moment where we figured, some time in 2012, that now was the right time. It made sense from two directions; a new home for Berlin Atonal and the Kraftwerk revealed itself as the most perfect venue to host its return, and from the other side, the festival made for the right occasion to reveal that space to the public.

What would you say are the similarities and differences between the Atonal of then and now?

The parameters are largely the same, yet the content is different. The idea has always been to do something meaningful and interesting outside of programmed and conventional applications of music. It has always had a strong Berlin focus, whether that’s through the artists performing, the mood and direction of the programming or the venues that host it. Those earlier editions happened a long time ago – before the fall of the Berlin wall. But in an important way they shaped the culture of the city, and of Europe as a whole, up until the present. Probably part of our task is to try and continue that story. 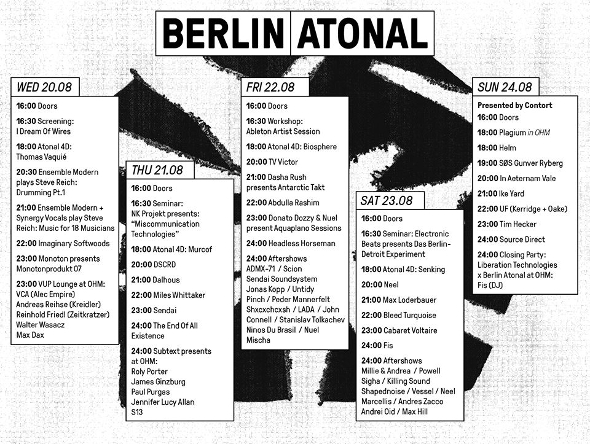 What is the story behind the Kraftwerk building, it’s an abandoned power station right?

The space was discovered by Dimitri Hegemann in the mid-2000s. After Tresor closed down in 2005 he began looking for new spaces. He found the power plant right in the centre of Berlin, completely untouched. Kraftwerk is more like a ruined industrial cathedral than a building. It’s bigger than 22,000m² and we’re constantly surprised at the new things we find in it every week, from remnants of campsite hideouts in the basements to broken machine rooms up in the attics. It takes a lot of work and planning to turn it into a functioning space but it’s a good canvas for interesting ideas.

How do you decide who will play and what commissions will take place each year?

Each of us has some things we really want to see and hear. That’s the starting point. The biggest motivator is usually: “What about doing that in the Kraftwerk?” Then we come together and try and fit it all together – usually with a lot of input from the artists involved as the space is so specific and requires so much tailoring.

Could you elaborate on the collaboration with Amsterdam’s 4DSOUND for ATONAL 4D.

We were actually introduced to this project, and the team of engineers and sound designers behind it, a few years ago. We’re always interested in how technology can add something meaningful to the creative process and provide a new tool or language that can be used by artists in a meaningful way. So since we experienced the system and what it can do, we’ve been trying to think of ways that we could bring the team and the technology to Berlin for the festival.

Then the biggest challenge is finding the right people who can take up the challenge of using these new ‘tools’, speaking this new ‘language’ to produce something great using these new possibilities. Again it’s a delicate balance, as great technology is only as good as the people using it.

We never miss a chance to do something with Murcof, and Biosphere was also a natural choice. Raster-Noton stalwart Senking was something we really wanted to see. All of the performances are composed specifically for the system during residencies with the 4DSOUND crew so they are really something special.

Did Richard H. Kirk take much convincing to play as Cabaret Voltaire?

In a way he did, in another way, perhaps the context of the festival was the right one for him to take this step. It’s an honour for us. The influence that Richard and the group have had on the musical landscape is tremendous and we’re really proud to be able to showcase the show at the Kraftwerk. The show will be completely new material and will utilise some interesting visual set-ups. It’s not to be missed really.

Who are Ensemble Modern and what was behind the decision to have Steve Reich’s Music For 18 Musicians played at Atonal?

For the last 30 years or so Ensemble Modern have been at the absolute forefront of new music. Taking commissions and performing new work by John Cage, Steve Reich, even Frank Zappa. They are world-renown for their emphasis on near-academic rhythmic perfection and the ability to raise complex pieces to a higher level. They were actually the ensemble chosen to record Music for 18 Musicians for RCA in 1999.

They will be joined by Synergy Vocals from London for this performance, which is going to be very special indeed. For us, 18 Musicians is one of the best musical compositions of the last 100 years and it is an honour to have it performed in this way, which will also open the festival. Joining them will be Monoton playing a specially devised performance based around his legendary 1982 recording “Monotonprodukt 07”, and another commissioned performance by Imaginary Softwoods, aka John Elliott, boss of Spectrum Spools.