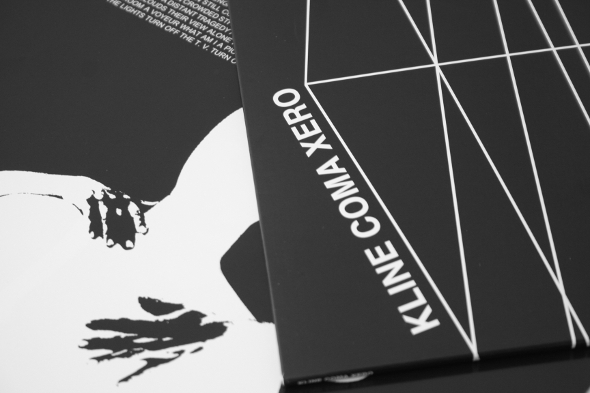 “We are just images now”. Tony Williams’ recently born project Kline Coma Xero self titled debut for the wonderful Seattle-based Medical Records dispenses such pearls of postmodern thought in large quantities. On other tracks, Williams disembodiedly croons that ‘we’re all mannequins’ (“Mannequins”), that we’re in a ‘casualty ward’ (“Casualty Ward”), that he’s ‘standing in the dark looking for an answer’ (“Silent Call”), or ‘alone in the darkroom’ (“Darkroom”), and finally that there are ‘no windows’ and that hence we are told to ‘turn off the lights / turn off the TV / turn off the thinking’ (“No Windows”). 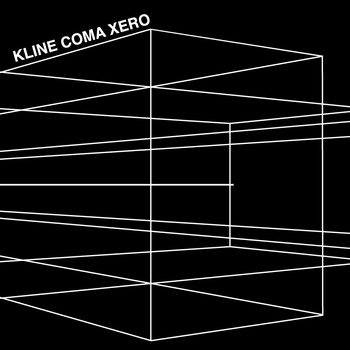 I begin by taking this detour into the lyric because I am invited to: the press release and other bits and pieces explicitly state that we are to think about Ballard, Burroughs and Pynchon in terms of understanding his ‘melancholy vocals’, ‘lyrical content’ and ‘philosophical outlook’. Even the name of the project refers to three elusive, mysterious yet recurring personas from JG Ballard’s mythology. This, of course, is the stuff that dreams (and nightmares, same thing) are made of – it’s the kind of dystopian angoisse served straight from the freezer which agitates so much coldwave, darkwave, synthwave from the end of the Russian détente to now. It is a classic palette, beloved by many, which thank god still resonates with a new generation of musicians interested in dirtying their hands with the dark matter in life – including Tony Williams, and hats off to him.

The thing is, Kline Coma Xero’s record really is just images; or rather, it is less than images, because images – even the cold, metal and plastic images evoked here – have atmospheres. In fact, that’s kind of all they have: if you take the atmosphere away from most coldwave projects you’re often left with nothing, and therein lie some of its enigmatic pleasures. This record, it seems to me, wants to do ‘just’ images, but there’s so little dust coming off those images that it ends up sounding manneristic; there are moments in which, dare I say, it sounds like a parody of coldwave – which is a shame, because presumably that isn’t what Kline Coma Xero is looking to do. It’s as if by putting an attention to genre before a deeper development of musical expression, this record had ended up strangled by the coldness of the very coldness it is made of: it’s as if Williams were so frozen he can’t speak. Yet, I feel he might have interesting things to say.

Now, for the listener who can get over all of the above, or who disagrees with all of the above, the record is good – and even I find myself getting over this intrinsic fakeness in the name of listening to it properly and giving it the time of day (or night). There’s a lot to dance to here, a number of good melodies, and a lot of expert use of lovely synths. The record opens on the majestic and detailedly, intelligently crafted “Left Behind”, reminiscent of classic Martial Cantarel, all complicated drum patterns and spiralling, wiry sounds which seem to be forever just out of reach, just on the cusp, just about to settle before swerving off into the distance again.

Mr. Williams has a nicely complex sense of rhythm and a beautiful taste for textures which he indulges in a few of these tracks: “Silent Call”, “Photo Falling” (which has got something early >Kirlian Camera-esque about it) and “Casualty Ward” all display an interesting ‘off-ness’ which can get really quite rich over time. A more pop vein appears in other tracks, such as “The Fanatic”, “Darkroom”, “Rewind”: here a fragile, boyish sensibility accompanies easier, but also more anthemic melodies and a spectrum of sampled sounds which seem to wink to Depeche Mode in their ‘Socialist’ years.

I think the album gets particularly interesting in its two penultimate turns, two instrumentals called “Minus One” and “Camera Talk II”. Both are simple pieces, with melodies which bring to the ears certain Scandinavian joys like Daily Fauli, Glenn Winter, or Artificial Control – the first is more naive and toylike, the second is tinged with slightly cosmic suggestions. In the very mixed bag that is this album, in its almost neurotic jumping between influences, these two little tracks seem to stick to an idea long enough to reveal the beginning of something less stylized, more personal. You should listen to this album, keep it around the house a little, see what it does – but what it mostly does for me is tell me I absolutely must listen to the next.