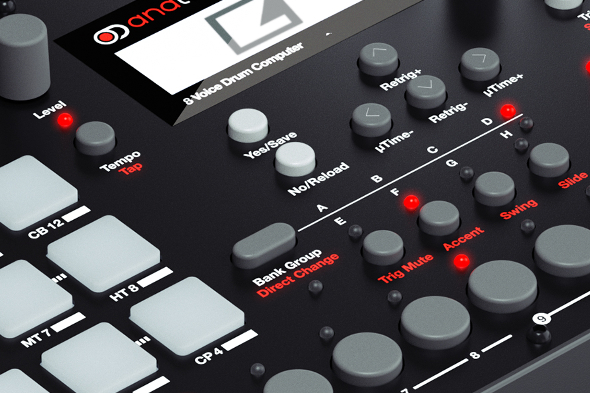 Elektron’s latest drum machine combines the old and the new into one package. Rob Lee takes the Analog Rytm for a spin.

Anyone with a passing interest in beat making will probably be familiar with the recent influx of drum machine and hardware/software hybrid production controllers. Elektron’s Analog Rytm is just the latest in this increasingly crowded marketplace, but this new piece of hardware is itself something of a successor to Elektron’s own Machinedrum unit, which has been a solid hardware rhythm solution for many studios since 2002. Given that the Machinedrum has remained largely untouched for 12 years, the Analog Rytm arrives not just trying to compete with an increasingly crowded marketplace, but the legacy of its own predecessor. 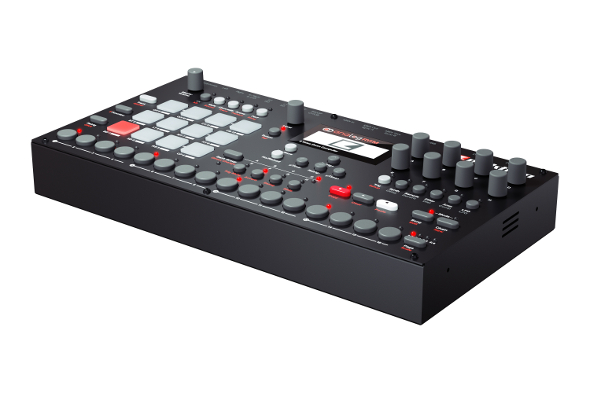 Like the Machinedrum, the Analog Rytm is also capable of playing user-inputted samples with full control over start and end points, tuning options and many other features. Needless to say, the Elektron Rytm is a powerful drum synthesizer. Like the aesthetically similar Analog Four synthesiser, it also features Elektron’s award-winning step sequencer, allowing four bars of four beats (64 steps) with all of the trigger lock options you can imagine, along with swing, slide and accent functions with sound per step changes, chromatic mode, scene mode and performance mode.

The unit also features full real-time control via the eight push encoders and various combination keys with visual feedback through the modest but well lit digital display screen. The Rytm also features some impressive memory storage capabilities, with a whopping 1GB of sample storage and 4096 sounds in the library. This drum machine organises its kit, song and pattern memory into any of 128 project slots with 128 kits, 128 patterns and 16 songs per project. 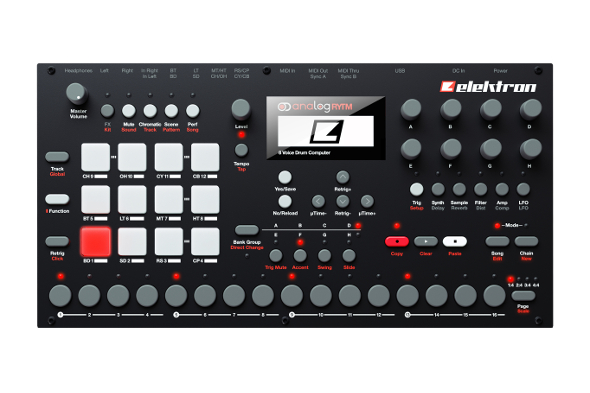 The voice architecture of this drum machine is the main draw here however, designed so that you can get as extreme as you wish with your sound design. The kick drum and snare engines for example, allow you to shape the analogue signal to the extent that it is possible to get synth-like bass sounds or short sequencer ready synth tones. To enhance these sounds you can layer them with a sample and add pre-filter analogue drive, shape the analogue filter with full ADSR and make use of the LFO to modulate any parameter that you can think of. Creamy, wobbly, elongated kicks or short and crunchy snares can created quickly, and it’s possible to coat your creations in delay and reverb if you wish.

However, this powerful drum synthesizer and sound design tool really comes alive when you start dropping your sounds into sequences. All of the 12 sequencer channels can be programmed on the step sequence grid or recorded live using the velocity and pressure sensitive performance pads. There is also a repeat mode allowing you to record steady 16th notes, using the pressure sensitivity of the pads to create variety. Step sequencing is a very quick way of getting solid rhythms up and running, but if bread and butter rhythms are not enough to get you inspired, then you can make use of the trigger lock functionality also present on this unit. Trigger locks allow you to assign a momentary parameter change to any of the steps on the sequencer grids. This becomes exceptionally useful if you have created a synth bass sound, letting you assign parameter locks to change the tuning of various steps, allowing the creation of fully-fledged bass lines that can then be tweaked in real-time. You can also assign locks to the filter cutoff or resonance to create morphing hi-hat patterns or filtered kick runs.

Overall the Analog Rytm is an impressive distillation of drum machines past and present. It borrows from the classic MPC layout, but has the dynamic workflow of the tried and tested step-sequencer of machines like the TR808, featuring powerful analogue drum synthesis, sample layering technology and plenty of modern connections. However, the Analog Rytm finds itself among some stiff competition. Korg have released the diminutive Volca Beats and Roland have the Aira TR-8 which uses samples to update their 808 and 909 units. Both of these have affordability on their side, but neither of these units really have the all round synthesis power of the Elektron Analogue Rytm. Only the DSI Tempest offers any real comparison to the Analog Rytm, but the Elektron machine’s sample abilities make the Analog Rytm a slightly more versatile option.

The Analog Rytm isn’t without its negative points. Like many of Elektron’s machines, the Rytm has a steep learning curve, and the backlit LCD display is small for the information. It would be fair to say that it is not a drum machine for beginners, and the not insubstantial price reflects that. However, there is nothing on the market that manages to do everything that this machine does with this amount of versatility. For serious analogue drum machine aficionados looking for a machine that will serve them on stage as well as in the studio, the Analog Rytm could be the tool for the job, spanning both environments and injecting a healthy dose of fun into proceedings too.