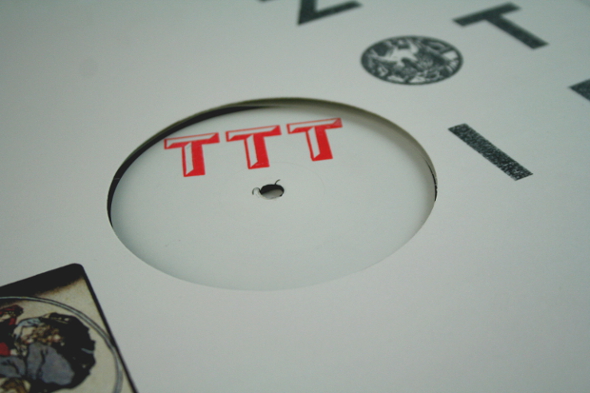 030303 Records, RVNG Intl, Blackest Ever Black and Infinite Greyscale were the source of some excellent record sleeves in July.

Since Infinite Greyscale expanded from publishing books to pressing records, they’ve retained a sense of visual consistency by working exclusively with the same three artists on each of their projects, with Ulrich Schmidt-Novak responsible for the screen-printed B-side and Paul McDevitt and Cornelius Quaback collaborating on the artwork. Their combined effforts for the label’s latest endeavour – Body Sound by the always excellent Holly Herndon – stand out for their own self-evident reasons. Equally as distinctive was Merijn Hos’ art direction for the Signals On The Double 12″ by Norwegian artist Retape on 030303 Records. The illustrated cover conveyed a real sense of depth to the point it felt like looking into a 3D illusion, and slots in nicely alongside the raft of other impressive projects available to view on the Utrecht-based visual artist’s website.

When Will Work For Good spoke to this site earlier this year, the agency’s founders Kevin O’Neill and Karisa Senavitis told Emma Tucker that with their contributions to RVNG Intl’s archival series they “wanted to avoid facsimiles of prior covers, as these re-issues often go far beyond the usual remaster and re-release”. This is very much the case with regards to their work on Anthology of Interplanetary Folk Music Vol. 1, the label’s extensive re-edition of Craig Leon’s two early ’80s albums. If you’ve read up on the release you will know how integral to the recording intentions for Nommos and Visiting the extra terrestrial sculptures crafted by the Dogon tribe from Republic of Mali were. It makes perfect sense then for O’ Neill and Senavitis to theme the cover art for Anthology of Interplanetary Folk Music Vol. 1 around them, and of course this is complemented by the kind of subtle artistic touches that we now expect from WWFG.

The mystery over Rezzett’s identity remains just that, despite the fact this anonymous production unit have taken to performing live (most recently spotted onstage at a meandyou event in Manchester). The fact Rezzett are playing live bodes well, meaning they possibly have more material in the bank, which means more opportunity for Will Bankhead to dress it up in some truly sublime artwork. When it comes to the end of the year, Rezzett’s second TTT 12″ Zootie will undoubtedly be amongst the contenders for numerous best artwork lists thanks to the series of intricately inked screen prints that adorn the record.

Anthony Gerace is already responsible for one of this year’s most memorable album covers in SD Laika’s That’s Harakiri LP for Tri Angle, and the London-based artist’s profile is raised further thanks to some sublime photographic collages for the Dalhous album Will To Be Well. Gerace’s efforts were complemented by the overall design which was conceived by Dalhous brain Marc Dall and executed by Oliver Smith, and further reflects the album’s “interest in the language and imagery of self-help, R.D. Laing and the anti-psychiatry movement”.