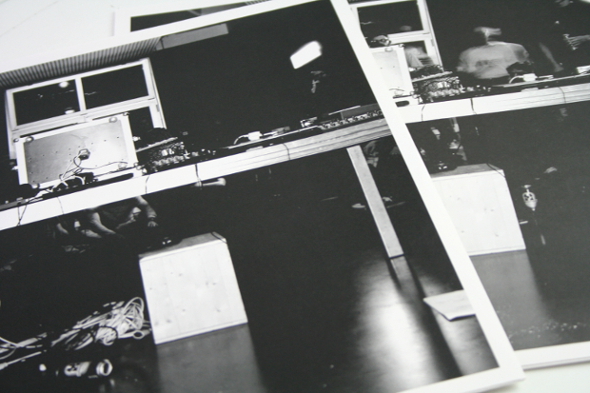 Crème Organization, Rhythm Section International, Mister Saturday Night and Live At Robert Johnson were among the labels that caught our eye in June.

Having been responsible for this column from the very off over two years ago, it seems fair to state that contenders for the monthly rundown fall roughly into two categories. At one end of the scale there are records with a central striking image that immediately catches your eye, but are largely simplistic in terms of design, and at the other there are those records pregnant with detail and design that you really need to pay attention to in order to appreciate fully. There was one truly striking example of the former this month in the shape of Crème Organization’s double pack of TX Connect material, which brandished yet another mind-bendingly good illustration from Mehdi Rouchiche, but otherwise there was an abundance of records rich in multi-faceted visual detail to soak up and admire.

If your grasp of Mister Saturday Night extends beyond the records they’ve released since the label was founded some two years ago, you’ll be familiar with the splendid illustrations that adorn the flyers for their Saturday and Sunday parties in and around New York City. Therefore it was a very nice touch that Brothers & Sisters – the newly released summary of their community – features several illustrations of MSN revellers penned by Anje Jager and HA LY, two artists whose work has previously featured on those aforementioned flyers. Taken as a whole, Brothers & Sisters is a very satisfying release to hold thanks to some understated design from the NIM agency, previously responsible for MSN poster design, and a smooth outer sleeve that manages to retain three slabs of vinyl without looking overstuffed.

Given that Justin Carter and Eamon Harkin are name-checked on the back of the debut release, it’s natural to assume that Mister Saturday Night’s focus on community has been an influence on Bradley Zero’s Rhythm Section parties and the newly launched label of the same name. Certainly the fact that local Peckham lad Al Dobson Jr is responsible for said release demonstrates that the label will fully reflect the ethos that has made the party such a hit. This sense of continuity between the party and label translates to the design of Rye Lane Vol. 1 too, with the record sleeve superbly incorporating the Rhythm Section logo as well as detailing their next dance down the pool hall.

The releases from Dark Entries have become increasingly aligned with our editorial tastes here at Juno Plus, and a big part of the label’s appeal has to do with presentation that riffs off the D.I.Y. nature of much of the music they reissue. Berlin-based designer Eloise Leigh is a regular contributor to the San Francisco label’s cause, adding little touches such as c90 shaped inserts to accompany the replicated artwork. It’s not clear why Leigh chose to tap into the conspiracy theory that aliens built the ancient Egyptian pyramids for the design that accompanied Sumerian Fleet’s album Just Pressure, but the execution is superb, especially the lurid green used on the de rigueur card insert.

Under the tutelage of art director Michael Satter, Live At Robert Johnson have cultivated a defined look that pairs bold colour with subtle typography and an overall composition that is reverent of a byegone era, yet still very much contemporary. San Laurentino’s latest 12″ for the label is a glowing example of just that, quite literally too, with the vivid orange tone used on the sleeve reminiscent of a fluorescent marker pen. In addition, the usage of an uncredited but rather dapper looking magician as the main sleeve image makes sense when you bear witness to the optical illusion of the 12″ centre label pattern in full spin.

As the Emotional empire has grown and expanded, Stuart Leath has called on the lesser known visual skills of Cage & Aviary’s Jamie Paton, with the London-based Scot largely responsible for the artistic direction of the [Emotional] Especial sister label. His design talents were also called on for Emotional Rescue’s most recent archival endeavour, the Yalla Yalla collection of Fatima And The Maluks curios that in a byegone age would have sold many a copy on the basis of artwork alone. On a similar note, the latest delve into the archives of Luc Marianni from French label DDD immediately caught the eye when Numeralogique: Between Light & Sound Waves 2 arrived in the Juno warehouse late last week thanks to some sumptuous sleeve design and art direction from Parisian Coline Malivel.

However, the one record that truly stood out above all the aforementioned releases was Arthur Boto Conley’s Music Workshop Presents 280913_1 / 280913_2, a double 12″ presentation from the Travel By Goods label run by Thomas Baldischwyler. Musically, this release consists of a series of live performances by Mark Fell, Joane Skyler, Some Truths and Miles Whittaker recorded last year at the closing party for Hot Knobbing, an installation from Baldischwyler at a Basel gallery space. The music is more than interesting enough on its own terms (with Whittaker’s contribution a highlight) but the release feels all the more special thanks to Baldischwyler’s additional design input with photographic prints of all four performing on the inner sleeves and an accompanying insert that features a discussion between the musicians on their reaction to the installation and their motivations behind their performances. Overall it really does set a high standard for releases of this nature.