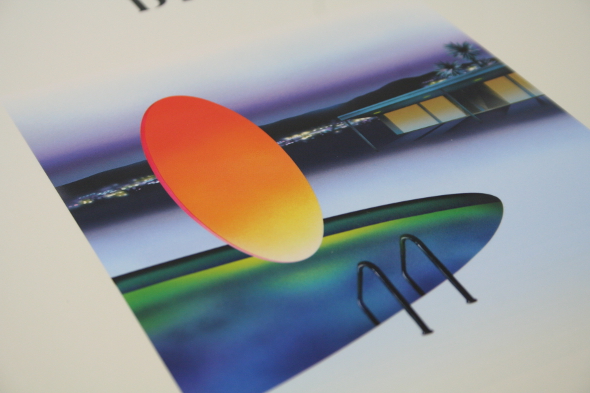 Few who heard All Day Everyday, the debut single by Parisian producer D.K. on Get The Curse Music, can have failed to have been charmed by its dreamy, new-age influenced pads, hissing analogue rhythms and sun-baked synthesizer melodies. It was rather surprisingly overlooked on its release in January, save for a few heads who drew comparisons with the tropical house and new age techno promoted by Future Times and Canadian brothers-in-electronics Mood Hut. The comparisons were fair. The mysterious French producer’s use of dense, off-kilter analogue rhythms, fizzing cymbals and picturesque melodies echoed the likes of Aquarian Foundation, Pender Street Steppers and, most potently, Maxmillion Dunbar. The 12” even boasted a stripped-back dub that sounded not unlike Max D’s work for L.I.E.S. as Dolo Percussion.

Parallels between the two producers are also apparent on this surprisingly speedy debut album for Quentin Vandewalle’s Antinote stable, which drops just six months after his first 12”. D.K is a neat fit with the Parisian imprint, whose varied output is almost the epitome of what this writer calls tropical pagan. What is tropical pagan? Electronic music that joins the dots between humid, tropical-influenced musicality and dark, ritualistic rhythms. For proof, check out the two EPs of voodoo rhythms and clandestine melodies from Albinos, the fuzzy, uncomfortable electronic soundscapes of Nico Motte, and the fluid analogue Balearica of Syracuse.

Drop is far more tropical than pagan. From the moment “Juicy” opens proceedings with a dreamy fusion of soft-focus pads, sparse, cowbell-laden percussion and gentle, delay-laden melodies, it oozes enveloping warmth. Even the album’s more melancholic moments, such as the tear-jerking broken house of “We Ride”, have a toasty beauty that belies their downbeat nature. This is clearly a production of D.K’s distinctive style, which is immersive and all consuming, smothering listeners in a patchwork blanket of humid textures, saucer-eyed melodies and eyes-wide-shut atmospherics. In truth, for all its’ attractiveness, this approach is almost overwhelming at times, as on the chiming, shuffling slow jam “All Due Respect”.

For the most part, though, D.K pitches it just right. The result is an album packed with woozy, trippy, off-kilter highlights. Check, for example, the dense metallic percussion, jungle atmospherics and drifting pads of “Safety Games”, the voodoo rhythms and hallucinogenic electronics of “Pool Rules” – where D.K’s debt to Max D and Protect-U becomes most apparent – and the wild, unhinged, drum-machine electro jam “Losing Ground”, whose submerged electronics give the feel of being thrown into the deep end at a sun-kissed seaside lido.

Like all great albums, Drop saves the best until last. “Keep On (Part II)” is arguably D.K’s strongest moment to date. A formidable builder, it grows from simple origins into a warm, humid, trippy blend of dense, Latin-tinged percussion, enveloping deep house chords, wide-eyed melodies and relentless cymbals. It’s sparse enough to sound magnificent on home stereos (or headphones, for that matter), but heavy enough to keep attention out on the dancefloor. Notably, it also features a thrillingly touchy-feely breakdown that echoes the long, woozy passages that made 808 State’s “Pacific” such a Balearic classic. There’s something very Ibiza-friendly about its undulating bassline, too, which sounds like it could have come from an old Larry Heard record. It’s a magnificent end to an absorbing debut album.