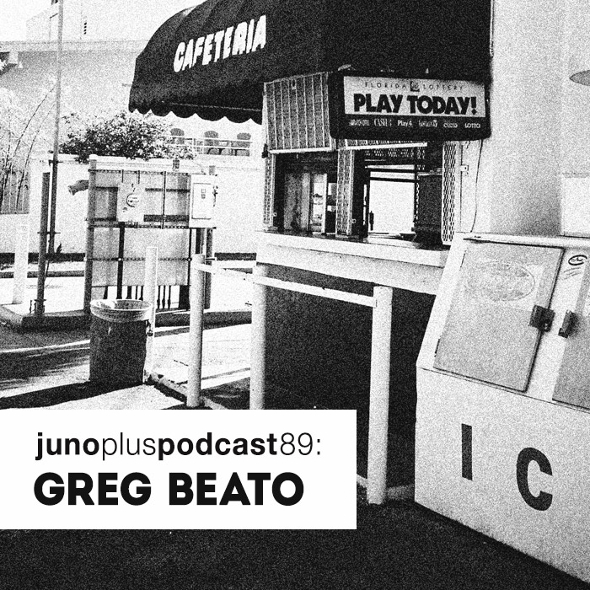 The Miami-based L.I.E.S. and Apron correspondent mixes up a bunch of techno and electro.

According to the man himself, we have the much-maligned internet to thank for the music of Greg Beato getting picked up for release by Apron and L.I.E.S. last year. All four 12″s issued in 2013 bearing the the young Miami-based producer’s name showed that Beato was capable of crafting the kind of tripped out dancefloor material many veteran artists would be jealous of (not to mention his strong grip on memorable track titles). This impression transfers to Beato’s record playing skills, with the official L.I.E.S. tagline that he “DJs like a seasoned veteran who has been in the trenches fighting the fight for a long time” more than re-emphasised on his mix for Juno Plus. Clocking in at 75 minutes long, Beato skilfully runs through all manner of unidentifiable techno and electro on a mix that’s been getting some serious repeat plays in our office.

Those wishing to catch Greg Beato in his element will be happy to discover that this month sees the youngster embark on a European tour, commencing with in Berlin with further events lined up in Paris, Milan, Frankfurt and a London date with Legowelt and Route 8 for the Find Me In The Dark crew. Despite Beato’s acknowledgement that the internet played a key role in his music gaining wider recognition through FunkinEven and Ron Morelli’s respective labels, the producer seems less inclined than many of his contemporaries with engaging in the self-promotion game, which made it somewhat of a surprise when he agreed to participate in answering some questions to accompany his mix. Read on for his thoughts on life in Miami, his exposure to clubbing and what future releases he has planned.

Hi Greg, how are things in Miami?

Hey how’s it going? Everything is good here in Miami.

Thanks a lot for doing this mix, I don’t recognise very much on it! How much of a balance between new material and old is there on it?

No problem. Thank you for giving me the opportunity. A lot of tracks on this mix are tracks I’ve been listening to since I was a little kid.

Could you perhaps give an outsider some insight into what Miami club life is like, given that it’s a city many will associate with the Winter Music Conference and not the kind of techno you make?

I don’t go out much unless I’m DJing here or I want to see someone interesting play. It’s literally two or three times out of the year I go out in Miami. And definitely not WMC. Not into that at all. I think everybody knows how Miami is without coming here. I stay far away from that as possible.

Where are the interesting clubs in Miami? I have noticed SAFE tend to put on some good nights at Electric Pickle.

Yeah SAFE is the last hope for Miami. Period.

What was your first exposure to club music?

When I was about 10 or 11 my brother took me to go see Paul Van Dyk. The beginning of his set was for all ages, then we had to leave after 11pm or something. That day never really struck me musically. I was more interested in telling my friends that I went to a club that day haha! After that I never went to a club until last year when I played for SAFE at Electric Pickle.

How did you come to release with L.I.E.S. and Apron?

You recently played the new Hotline party in Vancouver, how was that?

Did you get to check LNRDCROY’s live set beforehand?

Of course I did! Best music I’ve heard in a while. I tend to not listen or like much new stuff coming out these days but LNRDCROY is something special.

You have quite a few European dates coming up, what cities are you looking forward to playing?

Yes I have a nice tour going on very soon. I’m really excited to play everywhere! First time seeing all these places.

And can we expect some more Greg Beato records this year?

Probably next year. Or I don’t know, let’s see what happens.