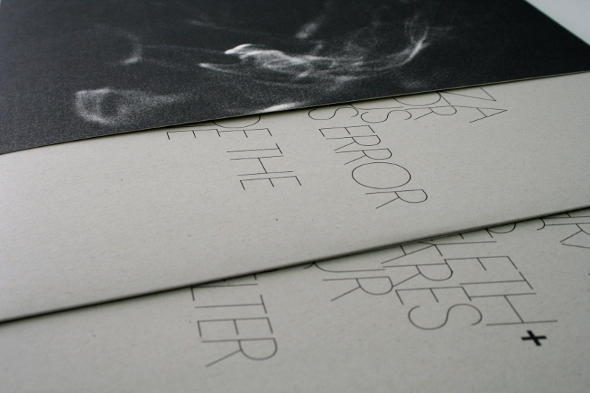 If you have seen Sculpture perform live or engaged with any of their previous work, you’ll understand how integral the visual element is to Dan Hayhurst and Reuben Sutherland’s work together, so it’s not surprising that their recent album for Software arrived with the most handsome of presentation. The zoetropic imagery that Sutherland has made a key part of Sculpture’s aesthetic was incorporated and adapted with eye catching results by Atlanta-based designer Farbod Kokabi, whose work for his own Geographic North record label is also worth investigating.

Plenty of keyboard tapping has been done in praise – in this column and beyond – regarding the work Kathryn Politis and Bill Kouligas have done to ensure that PAN releases are as visually alluring as they are sonically challenging. Their work remains as impressive as ever, with Bill Kouligas taking sole control over the presentation for Miseri Lares, the recent album from Valerio Tricoli that was described memorably by Ben UFO as “walking around inside a really hi-def 3D projection of someone’s brain”. In terms of artwork, things were not quite so defined, with some opaque smoky photography from regular PAN camera pointer Traianos Pakioufakis contrasting nicely with the bold skinny font of the outer PVC sleeve. The overall results offered perhaps the most impressive example of PAN’s ongoing penchant for putting out records housed in silk-screened PVC sleeves.

Regular readers of this column may feel Guy Featherstone’s ongoing work for Diagonal Records features quite regularly, but each of the label’s releases is impressive enough visually to merit inclusion. In terms of the latest Diagonal release, Club Music by Powell, it looks like Featherstone was tasked with transforming the label founder’s name into a similarly towering figure and the results speak for themselves.

Fabric’s in-house label Houndstooth was previously covered in this column at launch, with Call Super’s inaugurating 12″ noted for the manner in which it paid homage to the producer’s father David Seaton – a celebrated artist in his own right – as well as implementing the Houndstooth logo in a distinct patterned design; this aspect has been replicated on much of Houndstooth’s subsequent 12″ output. Call Super’s triumphant return to Houndstooth last month with the Depicta 12″ has been roundly applauded, but not many people have focused on the artwork which is the label’s first fully printed sleeve for a 12″ release, and features some wonderfully abstract illustrations by the producer himself.

Having been provided the abstract artwork that adorned R Plus Seven, Oneohtrix Point Never’s Warp Records debut last year, the highly decorated artist Robert Beatty was again called upon by the UK institution for the producer’s Commissions I. Drawing together some of compositions Daniel Lopatin was commissioned to undertake for art and film installations, the 12″ was perhaps most notable for Beatty’s contribution, with the Kentucky-based artist showing a side to his visual palette that’s not as well known as his illustrative work for Spectrum Spools and Weird World.

Talk of Spectrum Spools offers a neat segue into parent label Editions Mego and their release of some new Outer Space material from Andrew Veres and John Elliott. As a label, Mego and its subsidiaries have few contenders when it comes to using obscure imagery that makes no real immediate sense but leaves a lasting impression. This was certainly the case with Phantom Center, which came adorned with a covering photograph from Alecia Tuggle that is as puzzling on the mind as it is easy on the eye.

A final mention must go to Vancouver collective Mood Hut who over the course of their output have proved it’s possible to make an impression visually using little more than some stickers, disco bags and a defined label aesthetic. Much like the label’s previous 12″ releases from Aquarian Foundation and Pender Street Steppers, The Dolphin Hotel Affair Vol. 1 by House Of Doors was made all the more charming by the finely inked text and illustration that have been a hallmark of Mood Hut’s flyers and tapes. Whoever is behind Mood Hut’s visual direction makes the label every bit as special as the cast of producers responsible for the music.