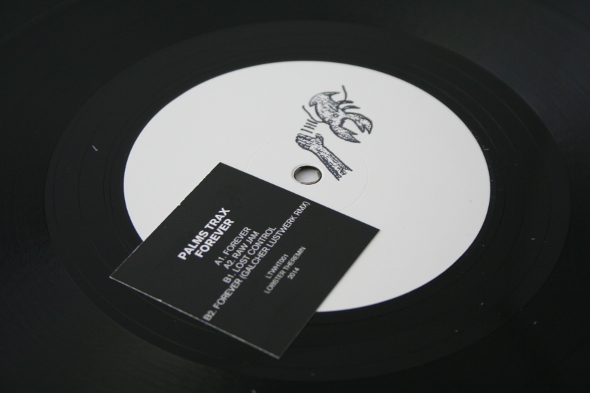 Berlin-based producer Palms Trax may only have one (and a half) 12” releases to his name – last year’s Equation, which launched the Lobster Theremin imprint – but already he’s been marked out as a producer to watch in coming years. It’s fair to say that Equation was a bit of a hit, though; not just commercially (the first 12” sold out in record time, and a revised second edition was released earlier this year), but also musically. Palms Trax’s trademark style – think warm synthesizer chords, stargazing melodies, a whisper of Chicagoan acid and snappy, swinging drum machine rhythms – is not only classically appealing and dancefloor-friendly, but also captures the zeitgeist. It’s perhaps unsurprising that comparisons have been made with the likes of Willie Burns (who remixed lead cut “Late Jam”), Beautiful Swimmers and Legowelt.

With such a well-loved debut behind him, matching the standards on his next release was always going to be tough. Happily, the Forever EP contains enough glimpses of greatness to reinforce our initial impressions about the young deep house producer. The most startling moment on the Forever EP is not the title track, or even the ballsy, bleep-influenced analogue workout “Raw Jam”, but rather “Lost Control”, a spitting, zipping voyage into 808-led electro. Built around formidable, Drexciya-influenced drums and bouncy electronic stabs, it quickly unfolds into a wide-eyed blast of melody-rich dancefloor electronica. With intergalactic electronics and alien chords providing additional texture, it breezily rushes out of the speakers like a futuristic spacecraft on route to a distant planet. All the while, it exudes the sort of baggy warmth that’s nothing less than intoxicating.

There’s a similarly toasty feel about “Forever”, where brilliantly programmed drum machine groove and acid funk stabs underpin Balearic synth chords and a notably cheery melodic refrain. Given the picturesque, eyes-wide-shut nature of the melodies – think Scandolearic nu-disco, or Mood Hut style new age house – you’d expect that track to lack a little low-end grunt. In fact, the analogue-heavy groove – all contrasting kicks, snares and relentless handclaps – and thickset bassline make the track; without this roughness, it would be far too pleasant. As it is, it’s just right.

Interestingly, the accompanying remix from White Material contributor Galcher Lustwerk abandons the original’s standout melodies, instead lacing dreamy chords and a delay-laden vocal sample over a treacle-thick, dub-infused rhythm. The result is new age house at its deepest and heaviest; tropical techno beamed down from the stars by a sleep-deprived astronaut. Given the cheery positivity of the original, its’ heady weariness (despite the thunderous nature of Lustwerk’s bottom-end) is strangely appealing. It certainly provides a neat counterbalance.

The EP’s final moment, “Raw Jam”, adds a little stripped-back fuzziness to enhance Palms Trax’s late night dancefloor credentials. Its analogue beats are booming – and we’re talking speaker-shaking – while the arrangement of the 909 handclaps and skipping cymbals helps drive the track forwards. Once again, though, it’s Palms Trax’s choice of melodies – early Warp style electronic bleeps and sparse, intergalactic chords – that really catches the ear. Even at his most sweaty and intense, the Berlin-based producer can’t help himself. Like the rest of the EP, “Raw Jam” is as musically attractive as it is powerful.

A1. Forever
A2. Raw Jam
B1. Lost Control
B2. Forever (Galcher Lustwerk Remix)