The UK underground techno lynchpin will helm the first release on the revived Cosmic label – we speak to label director Sheree Rashit about what to expect.

Speak to anyone involved in techno whose first experience of clubbing began in ’90s London and they will invariably talk in glowing terms of Lost, the clubnight overseen by Sheree Rashit and Steve Bicknell. From late 1991 onwards, Lost brought many techno pioneers to London with Basic Channel, Jeff Mills, Robert Hood and Juan Atkins a few names that demonstrate the calibre of guests that helped establish Lost’s glowing reputation. Put on temporary hiatus in 2007, Lost has returned to the events game on a more irregular basis, with intimate nights in Curtain Road basement Plastic People complemented by bigger events – Jeff Mills, Jamal Moss, Tevo Howard and Francois K all played their most recent event at Fire in Vauxhall.

Cosmic Records was founded alongside the clubnight in 1993, with Bicknell inaugurating proceedings as well as contributing to the label’s thirty odd releases under numerous guises, whilst Rashit was responsible for the label’s aesthetic direction and day to day dealings. Cosmic also looked to the US for its release schedule with Chicago mainstays like DJ Funk, Tyree Cooper and DJ Deeon all contributing, whilst UK techno stalwarts Mark Broom and Phase were also involved before the label was put on hold in 2005.

Almost a decade on and Rashit and Bicknell have elected the time is right to relaunch Cosmic, with the first release of the new era coming as the Transcendence EP by Bicknell. Due out next month, the four-track record represents the eighth edition of Bicknell’s ongoing Lost Recordings series, and to get a better idea of what to expect from that and the label’s overall future we spoke to Sheree Rashit.

It’s always been in the pipeline. The industry, as such, has changed from when we first introduced Cosmic, new formats have emerged, although currently we’re still vinyl only – guess it’s down to timing and doing things when they feel right for us rather than producing things on a production line. Both Lost and Cosmic are close to the heart and, as an independent, we feel we need to work to our own agenda.

What are your future plans for the label? Will it be business as usual or should we expect something different from what you were doing before?

Things progress, we’re hopefully going forward and developing the sounds we believe in but with the integrity of the work we put out in the past; not vastly different, on the same trajectory, but moving forward and sometimes sideways.

Steve Bicknell’s Transcendence EP is the label’s first new release. So does this mean Steve the producer is ‘back’, so to speak?

Definitely, there’s more Lost Recordings to come and other releases by Steve, within a different vein across the cosmic divisions.

Will a new cast of producers be introduced to the roster?

Potentially, we often work with different producers under pseudonyms devised for Cosmic, (we) always encourage the development of sounds and work that fits our outlook.

You are, and always have been, in charge of the label’s artistic direction, is that right?

Yes, but there’s not much to explain; as it is with Lost, Cosmic is about feeling. The direction is personal and EP titles reflect situations and thoughts associated with the music alongside life as it is. Each release is specific. It won’t be particularly ‘clean’ or highly edited, more raw as it always has been, the handwriting will continue as it’s part of the Lost/Cosmic identity. Initially Lost artwork featured an Alien, not for any sci fi reasons but as an expression to reaching out to things that are different, the new LR a/w features an alternative in the form of a Tunjo figure. Traditionally, Tunjos were buried in places to give thanks to the gods and allow the spirit to transcend earth boundaries. To my mind LR 8 is hypnotic with depth and soul, deep and transcends boundaries, the a/w and title accord that.

I often work in situations where the visual identity has to fit a brief or trend, so I guess this is the kickback, with all aspects of the label we don’t have to conform, it’s our expression and exploration as we wish it to be, both with the music we put out and it’s visual identity.

How much are you part of the Lost parties at the moment and how connected are they to this new phase of Cosmic?

Very much. Steve and I went out on a tangent when we started Lost in order to develop a night to reflect the sound we wanted to promote. We curate and produce the nights on our impulse and often feature djs together that aren’t expected.Electronic music, specifically techno, didn’t have the profile in 1990/1 that it has today. We’ve always incorporated other styles and influences into the line ups and Lost features 2 or more spaces, subtly diverse from each other. It’s about exploring what we want to do. Our most recent Lost event featured Jeff Mills and Francois Kevorkian alongside Steve in the red area.

When we first introduced Francois to the LOST dancefloor it would have been expected that he would be a ‘house’ blue area but having heard him play and after talking to him about his clicktracks we had FK and Derrick May play together back in the days of the Lighthouse, they then went on to form the Cosmic Twins and subsequently toured together. Our ‘blue’ area most recently hosted Hieroglyphic Being alongside Tevo Howard, another Chicago generation, our first Chicago acts were guys like DJ Funk, Tyree Cooper, DJ Deeon, who all released on the Clubtracks division of Cosmic. Lost and Cosmic are very much reflections of each other and the divisions or labels within the Cosmic stable enable the production of music across the spectrum. The new Cosmic phase isn’t so different from the past, same ethos. As with all our projects we’ll see where it goes…. 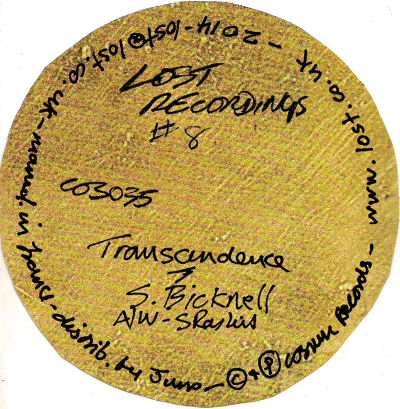