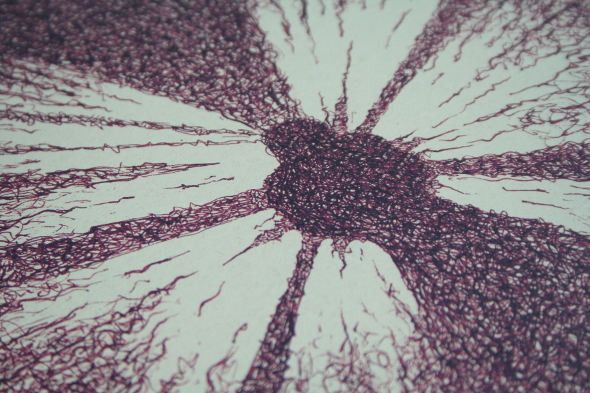 Of all the collisions of styles that have taken place over the years since dubstep arguably atomised electronic music, one of the areas that has borne select and consistently satisfying fruit has been that where the hallmarks of the hardcore continuum have fed into darker strains of techno. That may sound like a vague definition, but you could hear it back in the early Millie & Andrea singles, the Surgeon remix of Darqwan’s “Said The Spider”, not to mention the dynamic flux of Call Super, Objekt, the output on Cold Recordings, Bristolian producer Rhythmic Theory, or any number of other contemporary dance-worriers. As one half of Lakker, Eomac has more than proved himself adept at melding extraneous elements into techno structures, and on this solo LP for Killekill he goes even further in his exploration of rhythmic junctures in the outer limits of dance music.

Spectre wastes no time in laying out this idea, as “SU Riddim” positively belches out of the speakers with the kind of bass-laden malaise that made Vex’d such a revelation when they dropped. From the half-step drama to the murky vocal sample, there is a rave beast at the controls, and it’s a dab hand at atmospheric sound design as much as gut busting b-lines. “Forest” too skips around a broken beat that quivers as though it might disassemble at any point, but between the pressure of the rhythm section there is a bittersweet melodic chime and a haunting string that open up the emotional entry points to the track a treat. “Rising 3” is perhaps the most literal ‘ardcore referencing track with its granite-weighted break beats and feverish vocal lick meeting with some seriously frayed electronics to make for a devilishly fresh take on the tradition. “Mika Riddim” meanwhile strips the steppiness down to a spacious, uneasy march that calls to mind the arcane stylings of the LHF Collective.

There is plenty of more techno-orientated fare to be enjoyed on Spectre as well. “Rainmaker” is a revelation in its slow grinding malaise, making a most fearsome use of texture and distortion to create it’s own kind of uncomfortable. “Shell Of Dark” too takes on such aggressive decoration, although the rhythm behind it is in a more swinging, uptempo frame of mind. “Deeva” meanwhile takes an altogether different route into nerve-jangling 4/4 where eerie piano notes and dislocated vocal samples float about in a surprisingly funky throwdown.

Somewhat appropriately, “Spectre” forms the centrepiece to the album, stretching itself over seven minutes with a funereal death march of a kick drum. There’s a loose fit shuffle to the accompanying top end percussion, all lazy snares and reluctant hats, while the breakdowns come on like tear-out D&B slowed to a crawl. When these synth stabs fall back into the murk of the track the result is a cloying rave with a nihilistic abandon. The growling bottom end meets with a beat that could just as easily sit in a dusty house track, and so an utterly singular piece of music is created. It makes for the perfect summation of what the album is about, distilling the many factors that feed into Eomac’s sound.

In many cases the influences on Spectre are kept a little more separate than you might expect, using different tracks to tap into different ideas, but as a whole body of work everything is united under the banner of ghoulish sound design and morose musicality. In the end, that balance of diversity and cohesiveness is what make a great album.