Polymorphic Operators: An interview with Sculpture 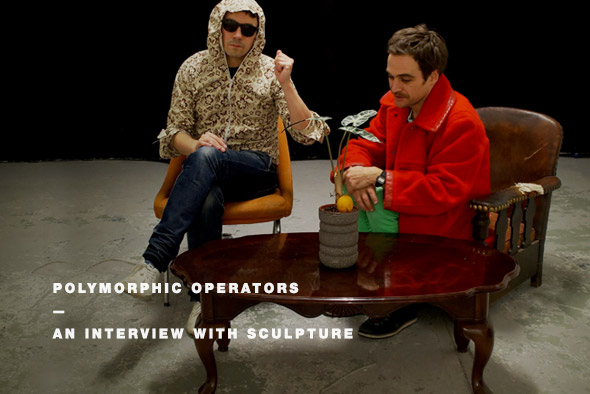 Emma Tucker speaks to Dan Hayhurst and Reuben Sutherland, the duo behind the “sound and vision conglomerate” Sculpture about their distinct approach and new album for the Software label.

Sculpture offer a rare thing in the world of music: a truly mutual collaboration between a music-maker and an image-maker. Comprised of musician Dan Hayhurst and animator Reuben Sutherland, the pair have used their combination of absurd pop music and trippy moving image to great effect. Some of this is evident in the pair’s eye-bending zoetropic picture discs, but it finds its main outlet in Sculpture’s live performance, which sees Sutherland use the turntable as a ‘stage’ for his moving imagery. With previous releases on Dekorder and the Slime Code cassette though patten’s Kaleidoscope label – later issued on vinyl through Digitalis – Hayhurst and Sutherland have turned to Daniel Lopatin’s Software label for their newest release, Membrane Pop.

Membrane Pop is, for the most part, bereft of human voices. The closest you’ll get to a lyric or vocal expression of emotion is on a few ghostly samples, and even those sound like they’re entering your ears from miles away. “I’m into abstraction, and we tend to avoid having any meaningful lyrics, or any lyrics at all,” explains Hayhurst. “I’m not sure how it would work. In some ways, the visuals act as the focal point in the way that a singer would, live anyway. People are drawn to that.” 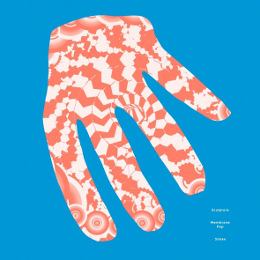 The few ghostly voices that have crept into Membrane Pop have been borrowed from Hayhurst’s collection of found sounds, literally cut out of tapes acquired on eBay. In fact, Hayhurst exclusively seeks out used tapes to find the kind of ‘cultural detritus’ that makes up Sculpture’s sample sources, and it’s with some wryness that Sutherland describes the way Hayhurst samples – quite literally picking through piles of tape to snip out random sections.

“There’s loads, and it’s usually crap,” says Hayhurst, of his collection. “I mean actually that’s great. It’s middle of the road stuff that someone‘s dad taped back in 1965, or big band stuff that’s not very good. And occasionally you get more interesting, really weird shit – I got some pretty old tapes with people recording strange activities, like medical experiments.”

The tapes, that Hayhurst describes as ‘triggers’, aren’t the main focus of Sculpture’s work, but rather a hook for the pair to hang their music around.  “A lot of the time I’ll find something and it’s some kind of human voice speaking or a bit of a song. Very often it’s unrecognisable and you can’t tell what they’re saying, but it has this resonance for people. You can hang the most abstract weird shit off of that, and it still has this connection that works in that way,” he explains.

He also describes the distant voices in ghostly terms, likening them to a guest transmission. “I feel like there is this information floating around from human history, and it has a message for you,” he says. “Especially when you’re pulling it all out at random and these voices are speaking to you, it does get a bit uncanny.” 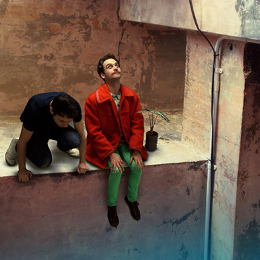 Sutherland sees Hayhurst’s random tape sampling as the gateway to a sound that the pair might not have otherwise discovered, elaborating, “it’s a good place to start: you accidentally find a weird sound, it’s not a rhythm you would have though of, it’s not in a key you would have thought of, and there’s a whole lot of things it’s not. Even just to think about what you would put with that is something you never would have come up, with because you never would have got that starting point, unless you did it randomly.” He also draws comparisons to the ways hip hop artists use samples of a riff or vocal to kickstart the process of making the beats that go with it.

Hayhurst’s use of tape is part of the pair’s analogue/digital approach, which Hayhurst describes as less about the two competing mediums, and more about physical vs digital. “Very few of the things I use are analogue things, but they are physical instruments like digital samplers. It shows you a route that you didn’t know was there before, and when you do the two things together it’s a very interesting combination, even on a basic tonal level, in terms of the quality of the sound. When you mix that together you get this sound that has a lot of information in different frequency ranges.”

It’s clear the pair take a similar approach, despite working in different mediums, and in Sutherland’s words, the reason his and Hayhurst’s work clicks together so neatly is because, “they both have the same sort of difference to the way it’s normally done.” Although relying on each other for live performances, the pair create work mostly in isolation from one another. Much of the similarity, aside from their thinking, comes about through a sense of process and a focus on a tactile way of working. “Taking a digitally generated or manipulated material and putting it onto physical machines that are good musical instruments,” is how Dan briefly sums up his own approach; but he draws parallels with Reuben’s work, which is hand-drawn, collected from sources or manipulated in Photoshop. “Once you get it out of the computer and into the physical world, you start to be able to do more musical things with it, I think,” says Hayhurst.

What Sutherland inputs are the visual elements that are lacking – “If I feel like something’s missing a certain texture – something really messy or wiggly,” as he says. The textures he’s speaking about are created with the use of multiple layers of images, placed on a turntable and projected using an overhead camera. The result is a series of ever-fluctuating optical patterns, which Sutherland controls by adding or removing layers and manipulating the turntable itself, to change the speed and movement of the animations. 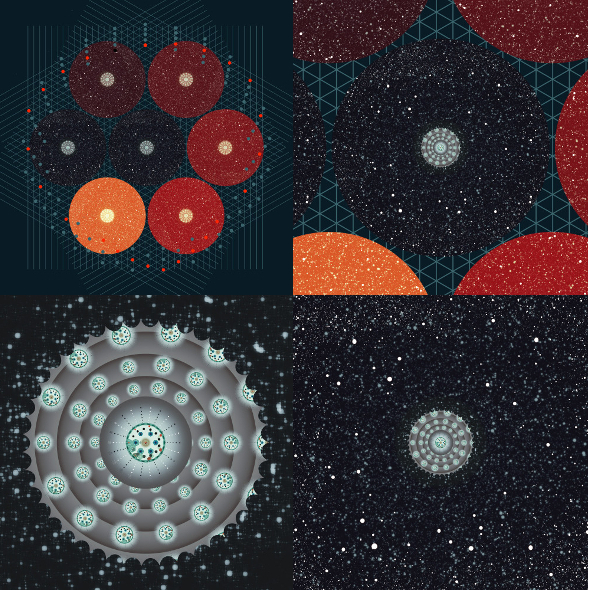 Since meeting, Hayhurst has seen their partnership as an ongoing conversation, explaining that their five or six years of work together have left them both ‘a bit psychic’. “The main thing really is the simultaneity of it that makes the connection,” he says. “We don’t sit there thinking, ‘oh we’re going to connect this or that’. We do it live. And the first time we played, we’d never really rehearsed or practiced, we just did it. And we still do it that way.”

It seems the pair thrive off this kind of ‘unpreparedness’, with neither of them expressing any particular fear about performing without a planned show. In fact, Hayhurst sees this tension between prepared and loose, more improvised work as one of the driving factors in the outfit, as well as something that marks Sculpture out. “A lot of music, or a lot of performance, at the moment, is very much pre-planned, and pre-thought out,” he says. “People are performing to a film, they have a show worked out that they’ll take on tour. I would die of boredom if we tried to do that.”

While Hayhurst accepts their approach is a risky proposition – admitting that 40% of their live show is improvised, or extemporisation from an existing framework – it’s an approach that’s paid off for the pair. “Playing live is fucking joyful,” he says, firmly.

“I’m into abstraction, and we tend to avoid having any meaningful lyrics, or any lyrics at all.”

It’s clear that people are going to refer to Sculpture’s approach as ‘experimental’, but the pair have a slightly different take on the term. “In a way, I’ve done the experimenting. I know the process I’m going to use and that doesn’t change very much,” says Hayhurst. “The input, the raw material changes, the output changes, but the process? I know how I’m going to do it.”

For Sutherland as well, the experimental tag was more applicable when he was still working out his animation techniques. Now, he views the act as more an ongoing process of refinement. “I don’t know if I’ve even seen that many truly experimental gigs,” he adds.

Despite the inevitable ‘experimental’ descriptor, Sculpture’s music is a demonstration of Hayhurst’s avowal that experimental music doesn’t need to be joyless. It goes against countless long-held opinions that music needs to be difficult, and exhibit ‘some kind of grimness’ (as Sutherland says), to be worthy of the experimental canon.

Membrane Pop couldn’t be further away from grim. The album bubbles up from start to end, and is ‘experimental’ in the most joyful way it could be. Citing Jean-Jacques Perrey and Gershon Kinsgley as particular figures of respect, Hayhurst explains that the idea of being intellectual and exuberant are not, for him, mutually exclusive. “I want it to be fun, I want it to be exuberant. But I do want to make music that’s quite radical without being dark, and that’s something that I do deliberately.”

It’s hard not to think of words like absurd, or cartoonish, when listening to the album and even Hayhurst admits that, despite spending years working on the project, he still hasn’t come up with a satisfactory word to describe the pair’s work. “To me, it’s kind of like the music; it’s almost like this puzzle. You get this material, and its like, what shape does this material want to be in, or suggest to you, when you throw it together in various configurations? I think it’s a personal taste, and aesthetic.” 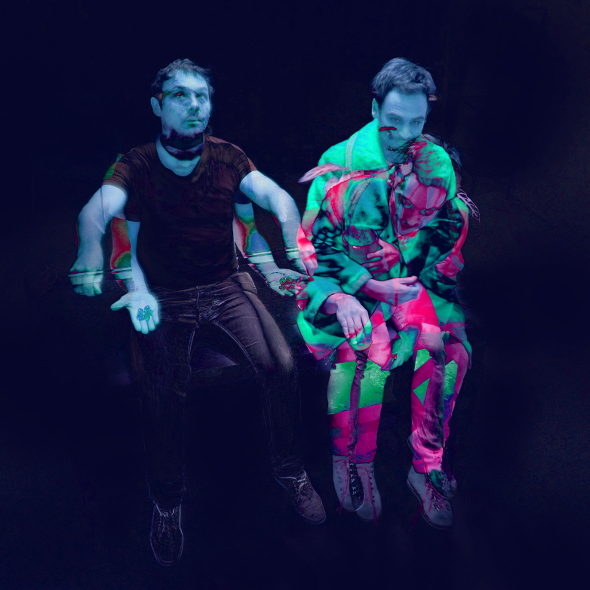 When it comes to taste, the pair have a refreshing approach to the age-old authenticity debate, eschewing snobbery in favour of the performance. Hayhurst mentions a story about Daft Punk being at two gigs at the same time, preferring the excitement of entertainment over pre-conceived ideas of what is ‘authentic’. “I love that idea that you could franchise it out in that way, and that’s quite thrilling. I want music and culture to provide thrills and not be boring. I don’t care how people do it.” He goes on to add that as we are bombarded with, what he considers, ‘dull cultural product’, the attraction of a performer rests more on their ability to provide thrills, regardless of whether it’s a cheap trick.

Sutherland shares similar views, caring less about people ripping stuff off, and more about a performance being exciting. “A lot of AV shows tend to be very background, like wallpaper. I want to jab you in the eye. I want to be strobing people so they’re starting to see colours they didn’t really know about.”

Sculpture’s genius obviously rests heavily in this sense of providing a spectacle, but more than that, on music’s relationship with the audience.

“Music’s not something that you pin down, that you perfect, and that you present to people,” says Hayhurst. “Music is something that fucking happens to you or happens to the people in a room; generated by that mad feedback between and audience and performers. When something exciting is happening. Not when you’re watching what might as well be a big laptop screen.”

Membrane Pop is out now on Software.