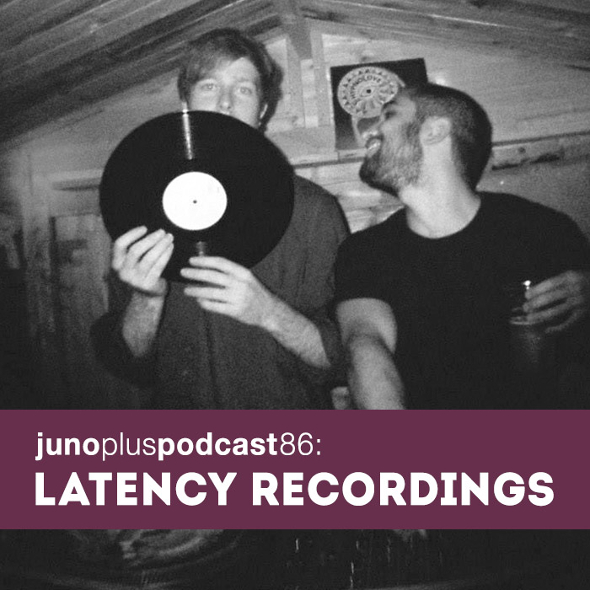 The founders behind the breakout Parisian label dig deep into their record collections on this 74-minute mix.

There are a few defining characteristics to the Latency label that have helped establish it in the forefront of many people’s affections, despite the fact that it is only three releases deep. Firstly, there is a defined label statement that puts Latency forward as “a place for experiments that enables artists to move freely though various fields of creativity.” This has manifested itself musically with releases from Innerspace Halflife, Joey Anderson and Workshop’s Even Tuell, each of which have demonstrated label founders Sidney Gerard and Suleiman Said’s refined tastes in electronic music, something that’s been well-honed by their years of DJing in Paris.

Complementing this is the overall visual aesthetic of Latency, whose no expense spared approach to design and presentation has made each release that little bit extra special, and it’s little surprise to discover that Sidney and Suleiman first met whilst studying product and graphic design at École Nationale Supérieure des Arts Décoratifs, one of France’s most decorated establishments for higher education. The art direction for Latency stretches beyond spending a few days getting their hand dirty with some silk screen printers however, as Gerard and Said have utilised the visual and design talents of skilled contemporaries such as Irwin Barbé, Louise Ernandez, Pablo Hnatow and Hugo Blanzat for videos and site design which have helped to further define the label.

In a wider context, Latency have contributed in their own way to a renewed appreciation for house and techno in its many forms in Paris and France as a whole; right now the French capital is prospering thanks to the work of Latency and labels such as Antinote, In Paradisum, ClekClekBoom, Concrete Music, and Syncrophone. Since setting up the label, both Sidney and Suleiman have taken to playing back to back sets in clubs and currently hold down a Latency show on the fledgling Rinse France station, and it’s nice to see their understanding behind the decks transfers to the serener sounds that make up their mix for our podcast series. Effortlessly mixed, the 20 tracks take in productions from Ross 154, Sendai, Lee Gamble, Aardvarck and more, with the resultant 70 odd minutes perfect listening for the coming summer evenings.

Sidney and Suleiman were also kind enough to answer in depth their reasonings behind starting Latency, how they came to release a classic in the Joey Anderson canon and what the future holds for the label.

Hi Sidney and Suleiman, thanks for the mix. First up could you give offer us a little background on your label Latency, how it formed, and what the two of you were doing beforehand?

Suleiman: We are both still studying product design at ENSAD in Paris; this is where we met three years ago, sharing a common passion for music in general. The idea of creating a record label came up in mid 2012. At that time, Sidney was finishing his second year and I was about to come back from a year off I spent in Copenhagen. We ended up in the same class. Such a structure would allow us to gather our two hobbies, which are music and applied arts. This would also give us the opportunity to work alongside friends who are studying in other departments in our school like graphic design, photography, video or fashion. The aim of the Latency project is to release quality music but also focus on the aesthetic and atmosphere. We like to silkscreen the covers ourselves, and to add an extra something each time.

The two of you regularly DJ together, is that right?

Sidney: We used to DJ separately before, but since the label was born we do it together. It’s a lot more fun, we developed that back-to-back thing and we have now a really good understanding playing together. We know each other’s records pretty well because we always share and discuss our finds. Plus we are always talking during the sets, trying to propose the best result possible.

You’re both resident at the La Sundae party? What’s that like, and it must be fun DJing on the banks of the Seine during the day, especially in the summer?

Suleiman: Yes, we are really happy to be part of this crew alongside Rouge Mécanique, Vadim Svoboda and Céline. The latter has been supporting us since the beginning. This party is something really unique for the Parisian house heads. When it started five years ago, it was the only venue of its kind, on Sunday afternoon, with super good line-ups, the best crowd and the perfect location. La Sundae might be one of the main causes of the rebirth of the electronic scene here in Paris.

Hakim Murphy and Ike Release’s Innerspace Halflife project gave Latency its first release. Did you have a connection with those two artists before, or was it just a matter of asking people you respected to launch the label?

Suleiman: We did not have any contact with Ike and Hakim until I met Hakim in Copenhagen. We were both playing at a same party there, organised by the Copenhagen Underground Posse. It was right at the time of our first discussions about launching a label, and also just after their first EP as Innerspace Halflife, released on Machining Dreams. Nobody really knew their alias back then, but we fell in love with the music and we decided to ask them for the first release. After a couple of months, we finally got the EP ready for mastering, then we started working on the aesthetic for a few more months.

Can you tell us about the photography and design you use for the label?

Sidney: For the photography and video, we asked our friends from school Irwin Barbé and Louise Ernandez if they wanted to work with us sometimes. We knew their universe would fit perfectly with what we had in mind. For the same reason we also asked Pablo Hnatow and Hugo Blanzat, who are graphic designers. It’s an ongoing process. For instance Suleiman did the front cover artwork for the second release and Paul-David Rollman (Even Tuell) is the one who took the picture you’ll see on the front cover of the third one. It’s a team effort; we are always discussing, experiencing and intervening on each other work. We like to think of Latency as a little laboratory.

How did you decide on naming the label Latency, and how does that word fit in with the type of music you are expressing?

Suleiman: We have been searching for a name for quiet a time. We wanted something that looks nice, sounds good but also has a meaning. We thought Latency would fit perfectly, because it is a ubiquitous phenomenon in electronic music. It is the time between a stimulus and the response to it. Also, almost nothing is named like that in the electronic music community.

Your second release was Joey Anderson’s From One Mind To Another 12”, which was one of Anderson’s best 12”s from last year. What were your reactions when those tracks came through and you heard them for the first time?

Suleiman: At that time we thought Joey was an underrated artist, but he was (and still is) one of our favorites. So we started digging to see if there was unreleased stuff somewhere, and there was a lot! The funny thing is that we actually found “Press Play” and “Attitude” on Inimeg’s SoundCloud, with maybe less than 200 plays in almost two years. As soon as we heard these we knew they were serious. Joey really liked the Innerspace Halflife release, so when we got in touch he was down. He kept on sending us tracks for a few weeks and then we heard “Mind Set”, which was the slap. 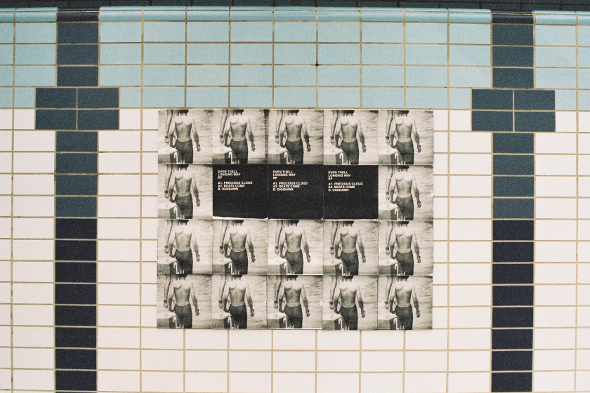 You then had Mr Workshop, Even Tuell, provide Latency’s third release. Is Workshop a label that has influenced you two so much so that you felt it was appropriate to ask him for some music? Or did that Longing Way 12” come through another kind of association?

Sidney: Workshop is certainly one of our favorite labels, if not the best in its style. But it is not the reason why we went to Even Tuell. He too is one of our favorite producers, although he has not been releasing too much over the past few years. Yet this is actually another reason for our choice – his last eponymous EP was out almost three years ago. Also, the two first releases were American-sounding, so we wanted to explore something different for the third one. It took some time before we could close the EP, because PDR is really busy with his work at Airbag Craftworks, but it was definitely worth it.

How do you feel the label is going so far, and are you enjoying running Latency as much as you thought you would?

Sidney: So far, everything has gone way beyond expectations! We didn’t even think we would repress the records. We love to travel, meet amazing people and share the music we like with the crowds. We are really happy to see that people notice our work and support it. We are enjoying it so much that it’s really difficult to stay focused at school! We will surely gather both studies and label for our diploma project, next year. Our school is multidisciplinary which means you have all these different departments quoted above, plus other ones such as fashion, textile design, stenography etc. Therefore, it’s a pretty open minded place. So for our final project, we are not obligated to do strictly product design. Our plan is to gather music, volume, space…Some teachers understand our passion for music, so they support us in this process.

You’re a French label, but there have been no French releases so far. What’s coming up for Latency in 2014, and beyond?

Suleiman: It’s interesting you mention that, because next release will actually be by a French artist! We can’t give it away yet, but we can say that it’s going to be pretty different than the three preceding releases. Regarding the future ones, we have definite ideas and we are in touch with a few artists.

How are you feeling about house and techno in France at the moment? It seems like people are really getting excited about it…

Sidney: Yes indeed, the French scene is really dynamic right now. Parties are everywhere, with super nice line-ups, there are even too many in the same night sometimes! It feels great to see all these people getting involved in the nightlife, even if sometimes it’s not for the good reasons. It’s not only happening in Paris, cities like Bordeaux or Nantes have also great promoters. Regarding the producers, we are huge fans of Seuil. There is also Antigone, he’s really talented, and a good DJ too. Other remarkable DJs are Didier Allyne from Syncrophone, or Le Loup: you can always expect a top selection. A French label that pops to my mind right now is Antinote; I really like the atmosphere they have.

And could you tell us about the mix? Suleiman, you used the word ‘smooth’ when explaining it to me a few weeks ago…

Suleiman: We recorded this podcast at my place using Technics turntables and a mixer. It’s actually more a mixtape than a mix. As usual, we spent some time preparing it, picking tracks we really love and putting them together in a way that seemed coherent to us, paying attention to the evolution. We really like the podcast exercise; it allows us to share music we cannot play in clubs. I used the word smooth because we wanted this mixtape to be relaxing and listenable in different kinds of situation such as working, driving, cooking… It’s even the best thing is to listen to music without doing anything else!

Thank you for the chance!