Jorge Velez has seen his share of different terrains. Growing up around the blue-collar textile factories of New Jersey and the still-hopeful, pre-economic-crash American industrialism of the ’80s, Velez explained the importance of the smells, sights and sounds of those work floors to Juno Plus back in 2012. But despite the unique location of his upbringing, and a lifetime of travel (including a European tour with an experimental band he was part of in the pre-MySpace era), Velez’s music doesn’t seem restricted by real places. Instead, he seems most inspired when he’s conjuring spaces from the dark recesses of his mind. Take the Hassan LP on L.I.E.S, which found Velez weaving a wholly-imagined soundtrack to a film that doesn’t exist – a film about an order of Persian assassins in the 13th century. Velez admits that it wasn’t created with a physical landscape of any kind in mind, but instead as a tool to get the listener immersed deep inside whatever landscapes their brains served up. 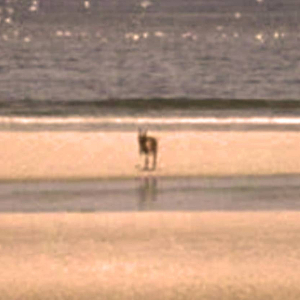 Velez also recently also recently uploaded an LP of “cosmic house italo disco techno variations” to his Bandcamp page in February 2013 under the Professor Genius moniker (a name that he now says he’s moving away from, one that’s more dedicated to “retro” sounds). This collection of tracks was dedicated to Jean Giraud, the hyper-detailed French cartoonist who provided concept design for films such as The Fifth Element. Giraud’s art was famous for blending traditional cowboy imagery with hallucinogenic futurism, flipping everything viewers thought they knew about John Wayne and the Wild West on its head.

Giraud’s futuristic desert-scapes are the perfect visual companion to Velez’s latest work – a series of experimental drone tracks that are infused with the same kinetic motion that Giraud’s illustrations showcase. Territories is just one of a vast quantity of works that Velez is releasing this year, with other contributions to the Borneo, Throne of Blood, Rush Hour, Crème Organization and Skudge labels forthcoming in 2014. But don’t let Velez’s prodigious output fool you, Territories is an immaculately structured work from start to finish that reveals something new with each listen.

“Blood and Bone” begins in an eerily similar way to the opener of Velez’s last LP, “Hassan One”. It has the cascading ambient fluidity of a Rrose track, except that things don’t culminate with a kick drum. It never turns abrasive, never explodes into the kind of analogue stomper that we might expect from Two Dogs in a House or Florian Kupfer. Instead, after  several minutes of dissonant warbling and whirling, it recedes back into the darkness it emerged from. But shortly after, “Curves” is stomping in its wake, sounding like a chugging piece of machinery on a factory floor, creaking and groaning under its own labour.

“Festival Mounds” might take its name from the pre-Columbian ancient tradition of putting together mounds for ceremonial purposes that modern anthropologists are still vague on. Touting a druggy, ritualistic rhythm that easily incites movement, it’s the first track on the LP that could sound at home in a dystopian dance floor. Like early ’80s Belgium synth punk wrung through a reverberator, “Festival Mounds” unfolds in a hazy pattern that seems to continually backtrack and get lost in itself – collapsing, writhing, and squirming in the dark, it eventually reaches a hollowed-out finish.

The B-side of Territories begins in a similarly subdued manner as “Blood and Bone” – only this time, a repetitious, two-tone drum beat keeps time underneath the sweeping cosmic motions, providing a sinister grounded rhythm. It’s similar to the Vatican Shadow remix that Berceuse Heroique offshoot ΚΕΜΑΛ touted earlier this year – thriving on the interplay between natural, organic sound and manufactured noise. “Wrecks” provides the most ambient cut of the album, suggesting a camera zooming over a placid lake at sunrise.

“Venas” closes out the record, and also may be the first record in the L.I.E.S catalogue with percussion which actually softens and calms the track somewhat. Like going for a stroll in the Montreal Biosphere twenty years in the future when half the wildlife is made up of replicant androids, it’s simultaneously elegant and unsettling. Velez fills the track with shimmering calls and cries that sound like they just might be coming from real birds, until you remember it’s a wholly synthesized work.

While the usual comparisons in the ambient world can be applied to different parts of Territories (such as Pye Corner Audio, some of Demdike Stare’s softer and quieter moments, or Vatican Shadow at his most blessed out), this writer finds it most useful to approach it as an audio companion to another form of work – if you can’t listen to it while flipping through Jean Giraud’s catalogue, perhaps checking out Geoff Darrow’s absolutely bonkers Shaolin Cowboy comic series (which pulls extensive inspiration from Giraud) would do the trick. Velez once said “the very best electronic music creates a very visual presence in my mind”, and Territories’ detailed and thoughtful textures are absolutely sure to take you places, whether they’re real, imagined, or feature post-apocalyptic desert showdowns.