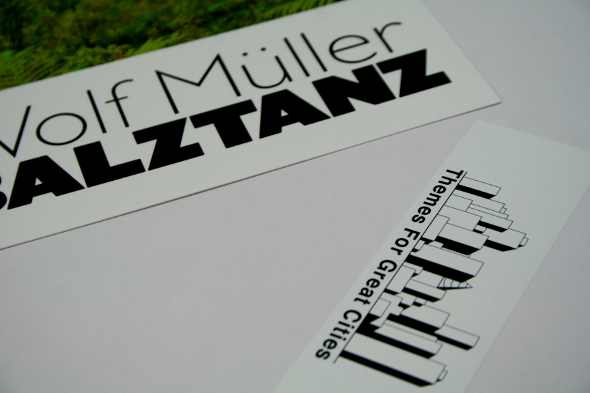 At this point in time it’s a little tricky to discern the precise context in which Wolf Müller operates. Certain links suggest he is also Jan Schulte, part of the Vulkandance crew operating in Berlin, although he and Müller have separate performer credits on this second release for Themes For Great Cities. In a way the long list of musicians feeding into this record give the impression of a wider collective, where maybe Wolf Müller is in fact a kind of smoke screen under which a spread of artists operate. With the ties the label has to the Dusseldorf-based art space Salons Des Amateurs it’s a theory that makes just as much sense as any other. 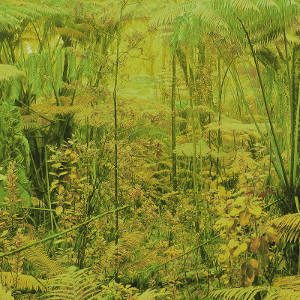 Context though is of course only part of the story, and such vagueness only serves to bring the music to the forefront, which can be no bad thing. And what music it is; a murmuring, tumbling perpetual groove of live instrumentation that peaks and dips in a natural flow that no machine could ever manage. “Dickicht” and “Zauber” form the front end of the release, and really come as a complete whole with little to split them apart. There’s a post-punk, krautock beating heart at the core of this music, as felt through the sturdy 4/4 throb of the drums and the bass, with the gentle snare fills at the end of every 16 bars demonstrating the structure that holds this loose jam together.

Certainly this is an easy-rolling freeride, even if it’s executed with restraint and patience rather than excessive noodling. The extra sonic elements, from the oddball guitar to the gong, the Jew’s harp to the bells, are fed in and out of the mix with the respect and control of players that are more concerned about the greater good than their own moment in the mix. More impressive than all of this though is the dynamics of the suite, as a relatively stripped down percussive set up manages to keep you engaged throughout. There is no shift in mood or tone to shock the mind and wake you up, just that everlasting undulating groove and the wonderful spread of instrumentation that flirts around it.

Kontan Chook’s mix of “Pflanzentanz” has its own unclear backstory which renders it an independent piece of music. The hand-drummed beat sits comfortably on the same side as the first two tracks, while a few touches of synthesiser enter the fray to serve a similar purpose to the guitar in the first bout, more concerned with rhythmic oddities rather than musical tones.  The title track brings the focus back to the merry band of players under Jan Schulte’s arrangement, and once again we’re locked into a disco-not-disco throwdown with a similar cast of characters. This time though the guitar is acting up and injecting a little more colour into the mix, which is a wise move in distancing this jam from the first two. What impresses here is the way the guitar plays out like a tricky synth, dissolving any notions of generic limitations and once again shirking the sceptre of context.

After all that organic matter JTC could be expected to ruffle a few feathers as man of distinctly acidic means, but here his signature approach is distilled into the existing Petri dish of natural organisms, and it makes for a perfect blend. Never has a 303 squelch sounded so completely of this earth, while from-the-box hand claps and sizzling hats merge with the source drums perfectly. It’s a respectful treatment that does credit to Mr. Cotton’s versatility as a producer when many would label him a strictly acid kind of artist.

It could be argued there are plenty of examples of this kind of rhythmic wig-out fodder dotted throughout obscure records from the 70s and onwards (and likely before as well) but it doesn’t matter. The intention of the artist(s) is clear, and the skill with which it is delivered is undeniable. With the added modern kinks coming from the two remixes, this is a record which suggests there is something exciting bubbling away on the outer rim of modern groove-based music, and it only whets the appetite for more.