Mister Saturday Night give it back 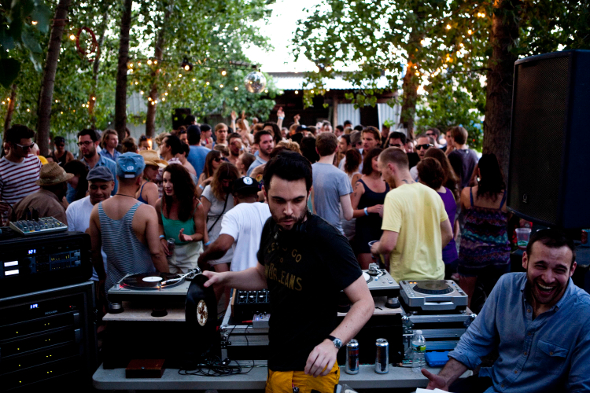 We quiz the New York-based party and label about their plans to donate profits to a local charity.

If you’ve read interviews with Justin Carter and Eamon Harkin (pictured above in their element) or spent some time chatting to the pair you’ll understand that Mister Saturday Night is very much a community-oriented operation. Beyond their parties, the Mister Saturday Night label has drawn from a pool of local Brooklyn talent, whilst Juno Plus writer Brendan Arnott compared them to “a social services organisation” in the feature we ran on Mister Saturday Night last year.

The pair’s endeavours to cultivate a community around the Mister Saturday Night operation have been strengthened with the public announcement via their website of plans to commit 10% of their 2014 net profits to the Robin Hood Foundation, a NYC-based organisation geared towards combating poverty in the city. The motivation behind this decision was a five part article by journalist Andrea Elliott published in the New York Times last December focusing on an eleven-year-old homeless girl named Dasani Coates, whose family lived in squalour less than a mile from the venues the Mister Saturday Night and Mister Sunday Afternoon parties were held. In order to gain a better idea about this, we spoke to both Justin and Eamon via email.

The announcement made it quite clear how much of an impact the New York Times article had on you both, were you previously aware of the contrasting conditions in the Fort Greene area?

Justin: Honestly, no. I’m generally aware that poverty exists around me, but when you walk by someone on the street who is less fortunate, it’s easier to compartmentalize. You tell yourself it’s an anomaly. You rationalize it because the person is an adult, and you imagine that he or she had some choice in the matter (though it’s becoming clear to me that adult or not, that is rarely the case).

But the absolutely unjust reality that this story painted is inescapable. The girl who is the focus of the story is eleven years old. What could she possibly have done to bring this on herself? She and her seven younger siblings and her two parents were living in a single room in a shelter where the public bathrooms down the hall were often unusable, so the family resorted to using a bucket in their bedroom as a toilet. There’s mold growing on the walls; there are rodents and roaches that swarm; and sexual predators are known to have lurked in the building. And this isn’t a place where the girl and her family just stayed one night – they lived there.

It’s sad to know that that’s possible in this world at all. And then to think that it’s happening half a mile from where Eamon and I live, in the richest country in the world, in a city where there is incredible wealth, where I can make a living off of people’s disposable income – how does that happen?

Eamon: Gentrification is a complicated subject. It’s a continuous evolving process in many cases, and depending on your perspective, you’ll have a different view about what point on the spectrum gentrification has made the right level of improvement for any given situation. Personally I feel that gentrification that 1. supports organic development of a poverty- or crime-ridden neighborhood that is respectful of the existing communities 2. is sensitive to the pioneers who take risks on doing something positive and 3. generally improves the quality of life, diversity and the fabric of a neighborhood – can be good thing.

And this is where I think we’ve seen a different approach by the administration in New York City in the past ten years. The accelerated gentrification driven my mass rezoning of parts of the city, tax breaks to developers and, in turn, measurements of success which only look at the average price per square foot have left no room for these sensitivities. It has directly impacted the underprivileged in our communities.

Donating 10% of your net profits is quite a bold commitment – are you hoping this encourages others to follow suit?

Justin: Absolutely. Eamon and I talked for almost two months about how to go about this. We considered giving the ten percent and not making any announcement about it, as we didn’t want this to look at all like we’re trying to get a pat on the back or to get more people through the doors by attaching charity to our party.

We decided that even more important than us giving money, though, was our ability to reach people and hopefully show them that they have the ability to make a difference. Our hope is that people will see what we’re doing and say, “Hey, if those guys can do this, so can I.”

What’s been the initial reaction to your plans to donate to the Robin Hood Foundation?

Eamon: Overwhelmingly positive. As Justin says, we discussed at length whether we should announce this publicly or not, and in the end the decision to do so was driven by a simple desire to draw attention to this issue and garner greater support and participation than our own. If we can raise awareness sufficiently, it will make a more impacting difference than just this gesture.

For those unfamiliar with the foundation, can you tell us a bit about what they do?

Justin: They are certainly better at explaining than I am, so you should have a look at what they have to say, but in a nutshell, Robin Hood raises money and distributes it to smaller organizations who have very specific strengths in very specific communities. When it’s necessary it also helps those organizations with services ranging from planning and executing strategies to legal counseling and finding real estate.

They are quite selective about what organizations they choose. In Robin Hood’s estimation, there are almost 10,000 poverty-fighting organizations in New York, and they work with only 200 of them.

We’ve chosen Robin Hood because they have a methodical, efficient way of targeting many of the problems that create poverty in New York – joblessness, homelessness, health issues, housing, and so on.

Do you have any further plans to help the wider community in New York City?

Eamon: In the past we’ve donated portions of the profit from certain parties to the Hurricane Sandy relief effort and to an LBGT homeless shelter called Trinity Place as part of the Pride celebration. We’ll continue to look for those opportunities, but for now raising money to fight poverty via Robin Hood is our focus in 2014.