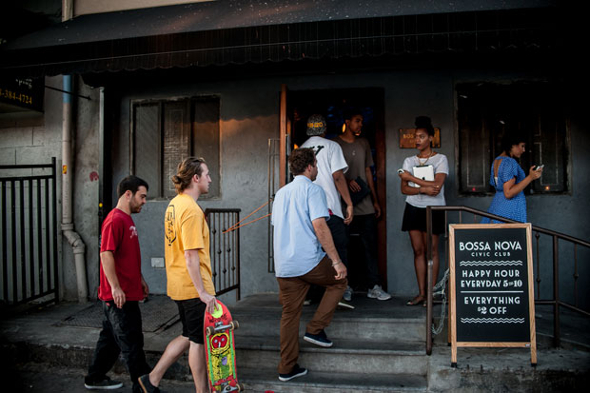 The Brooklyn club and promoters partner up on a new series of 12″ EPs, with Aurora Halal, Marcos Cabral, Jacques Renault & Mark Verbos and Dust featuring on the first.

If you’ve been to Brooklyn in the last year, there’s a good chance you might have ventured into Bushwick venue Bossa Nova Civic Club at some point. One of the area’s more recent venue additions, its past events have nevertheless seen most of the New York City underground’s key figures pass through at some point, with representatives from L.I.E.S. and The Bunker complementing guests like Jacques Renault and Anthony Naples. Sisterjam meanwhile are a multifaceted organisation which counts consultation, management and event promotion as part of their repertoire.

News now arrives that both outfits have teamed up on a series of 12″ EPs, with the first set to feature four tracks from Brooklyn-based producers, each reflecting a different side to the area’s musical underground. Entitled Bushwick is Melting: Volume 1, the record features tracks from L.I.E.S. artist Marcos Cabral, his Runaway partner Jacques Renault who teams up with NYC techno veteran Mark Verbos, Mannequin Records act Dusk, and Aurora Halal, the person behind the Mutual Dreaming parties who makes her solo production debut with “Hazy G”.

Sisterjam/Bossa Nova Civic Club will release Bushwick is Melting: Volume 1 on 12″ and digital formats on February 13.