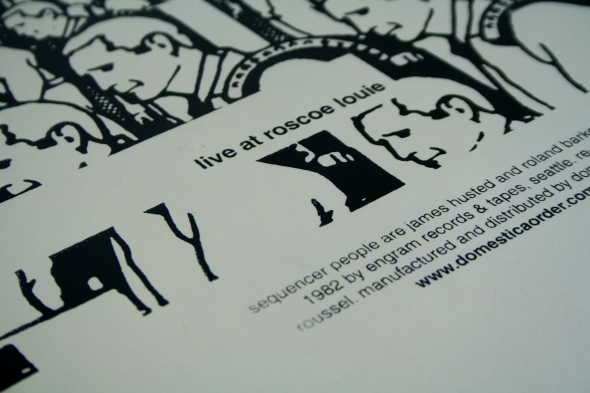 Some of the best reissues are those that open the figurative door to vibrant micro-scenes you never knew existed, and this 10” presentation of Sequencer People from Barcelona-based archivists Doméstica Records is a perfect example. To the casual music observer, Seattle is mostly known for being the birthplace of Hendrix, a ’90s grunge scene pioneered by Nirvana, Mudhoney et al, as well as housing a large percentage of the Dave Matthews Band fanbase. On numerous personal visits made to the city, there’s not been a lot of evidence to challenge this notion, though becoming more acquainted with the under-rated work done by the Further Records crew is a good riposte to local assertions that Seattle does not have an electronic music scene. 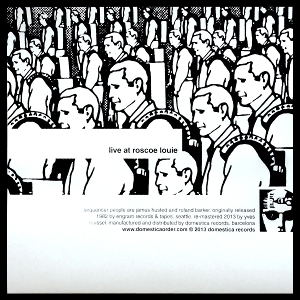 This record offers a glimmer of insight into the early 80s post-punk scene in Seattle that preceded all this, a time of experimentation and improvised performances. Sequencer People was a short lived music project undertaken by Roland Barker and James Husted, though the pair have a vast collective discography under numerous guises with Barker in particular an important figure on the West Coast thanks to his involvement in The Blackouts. It’s easy to get lost in this myriad of projects that Barker and Husted are credited with, and the temptation to explore further is even greater after indulging in Live At Roscoe Louie.

This four track release is the sole recorded output from Sequencer People and originates from a performance the pair undertook at the Seattle gallery space of the same name at some point in 1982. Issued that year in limited cassette format by local label Engram Records, who also released several other Barker-related records, it’s been given the remastered treatment from Barca-based Yves Roussel and presented in the most enticing of fashion by Domestica. In truth, the label could have pressed up Live At Roscoe Louie without the attention to detail they pay to all their releases and it would have been just as worthy of attention, given the music contained within.

The A-Side finds Sequencer People performing a suite of three tracks that meld into one another over the course of ten minutes in a manner so fluid it’s hard to discern where one finishes and the other starts. Multiple layers of primitive synth lines oscillate in and out of range, occasionally giving off the impression they are exploding as drum machine rhythms work their awkward magic. Around the mid point, a razor edged arpeggio lends the recording a semblance of balance before the music explodes into vivid chaos and the results sound like the sort of thing Cosey Club selector Richard D Clouston would enjoy editing. A desperate vocal reminiscent of David Byrne appears intermittently throughout this three track suite – whether it’s Husted or Barker is unclear – and it lends Sequencer People a sense of paranoia that’s prevalent in much of the minimal synth that appeared during this period.

Vocals play a much more prominent role on the stunning B-Side “Somebody Different,” which retains the improvised nature of the preceding Sequencer People recording, but demonstrates Barker and Husted were equally capable of more song-based compositions. Lyrically, it’s quite ambiguous what the vocals are referring to, though there is a real sense of emotion behind the delivery that is quite powerful in unison with the slowly percolating music. It makes for the sort of track you’d play in a DJ set and garner the attention of at least one inquisitive individual and has the air of forgotten classic about it.

A1. Distant View
A2. At The Beach
A3. Police Story
B1. Somebody Different.