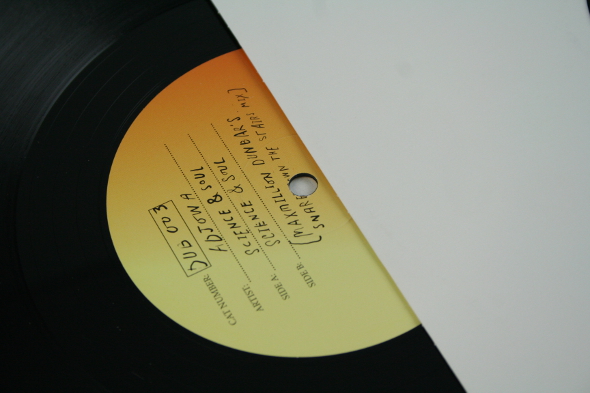 Making a welcome return after busting out with his effort on Happy Skull earlier in 2013,Bristolboogie lover Adjowa has now been snapped up by Don’t Be Afraid’s DBA Dubs offshoot label. TheLondonimprint has been visibly reaching out to the West Country and the Idle Hands crew in particular, with some noticeable gig-swapping taking place that has included ferrying The Kelly Twins (the pair behind Happy Skull) up toLondonfor one of the intermittent label nights that DBA chief Semtek has been known to put on. As a relatively unknown quantity even in his hometown, it’s unlikely that without such real world connectivity between geographically separated factions Adjowa would be enjoying his second release so swiftly, away from home and on a label with the respect that DBA commands.

Be thankful then for the relentless networking that independent music engenders, for it brings to light a record such as this; the kind of dance music perfectly pitched between edgy and fun, drawing on well-loved signifiers without a whiff of trendiness and cooking up something distinct in the process. “Science & Soul” drapes itself across the A side, and it’s clear from the off that a similar tone of bassline sleaze is going to carry the track in the same way that it did on “8 Ball” on the previous single. Here though there is more growl to the Moog-esque synth that punctures the bottom end, sounding decidedly disheveled even as it delivers the all-important gut punch.

“Science & Soul” undoubtedly has a slower release to it as well, letting soft whispers of hats stagger blindly through a fog of high end strings and waiting patiently to grant passage to more rhythmical elements, whether it be the ghost of a 303 strafing past or the rambunctious slap of the clap that comes cutting through the neon lights. Once that latter accent has been placed on the groove there’s no turning back though, and so the track fully rears up and hulks into the chunky party monster it knows itself to be.

Adjowa has once again turned to his vocoder to add some robotic allure to the mix and it makes for a pleasing embellishment on his sonic identity in this early stage in his career, albeit a trick that could easily fall into the trap of being overplayed. Whatever the case, he has managed once again to make a modern house track to cut it with any peak time belter, but his methods, sound sources and devices all stem from his boogie roots. That explains why the track holds such warmth and funk within that chunky dancefloor dynamic.

The flip of the record is given solely over to one remix which comes from Maxmillion Dunbar in his Max D guise; a choice that instantly calls to mind the Beautiful Swimmers chap’s predilection for boogie styles in his own madcap productions. Since first emerging on Ramp and the like he has always displayed a proficiency for low slung electro-funk and staggered drum machine grooves that fit neatly within Adjowa’s own creative concerns, but in the spirit of a true artist he sidesteps any such obvious path to compatibility and instead we get a dizzying chop-up that sits somewhere at the junction of footwork and jungle as reached by way of grotty analogue house.

It’s a jerky concoction that leans unrepentantly on sample triggers throughout while the groove whips back and forth in a stop-start funk, and it’s not easy to lock into such a meandering channel of rhythm. While the singularity is commendable, there is a point where Max D’s remix fails to round itself out, coming off avant-garde whilst still built as a dance track and winding up landing somewhere in between. That said, it’s certainly no cookie-cutter version, and in that sense doffs its cap to the distinctive path Adjowa too is headed down. From these initial marker points it will be interesting to see how the producer evolves over ensuing releases, and indeed where those releases might be.