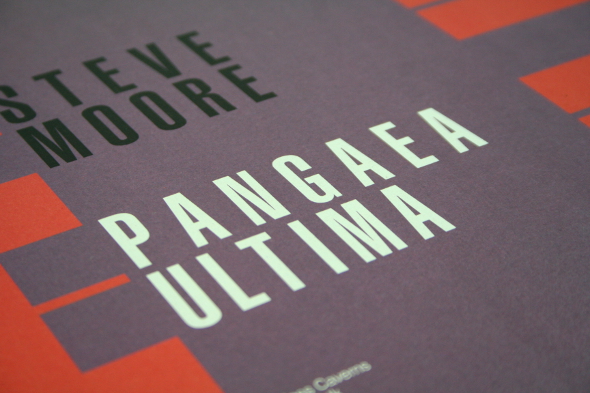 Steve Moore’s debut release on Spectrum Spools goes by the name Pangaea Ultima, and refers to a potential super-continent formation, occurring sometime in the next 250 million years. This mighty fusion of land-mass is part of an ongoing cycle that saw the formation of Pangaea, 300 million years ago.

If anyone is up to the task of providing the music for this epic formation, it’s Steve Moore. No stranger to analogue electronics, he is perhaps first known for his role in Zombi, which formed in the early 2000s, taking influence from the likes of Goblin and John Carpenter, at a time when few bands were citing horror soundtracks as inspiration.

Since then, Moore has built a healthy solo career, with some of his releases even spilling over into the dance floor. Despite this, Moore does not come from a dance music background, nor did he start out DJing, or have any intention of making dance tracks; he came from a noisy post-punk/no-wave/metal background that saw him through his involvement with the band Microwaves back in 2001.

Pangaea Ultima starts with “Endless Caverns”, a track that steers the listener into a dazed abyss of electronics; momentum gathers with expanding synths, oozing into a steady stream of hallucinations. Decisively warm tones alight “Planetwalk”, providing structure over looming uneasiness. “Deep Time” is a highlight of the album, with a stark rigid introduction that prickles the spine, emerging into a skewed dance track that feels slightly ill-boding.

“Nemesis” follows with sprightly ease; repetitive synths are placed on a backdrop of heavenly electronics, sounding somewhat inspired by Tangerine Dream’s work from the early 70s. The percussion on “Logotone” glides into a smooth swagger, lightening more ominous pangs of the track, before Moore closes out Pangaea Ultima in a wash of dizzy electronics with “Worldbuilding”. The synth stabs that break through the haze of this closing track offer a suitably dramatic closing to the album. Through this ambitious release, Moore reflects on the implications of Pangaea Ultima. This meditation of colossal scale ends up being the perfect match for Steve Moore’s style, channelling the spirit of 70’s experimentation while standing its own ground.