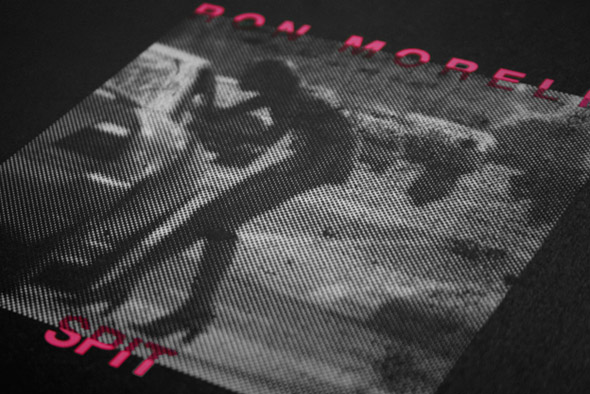 Undoubtedly the week’s biggest release was the debut album from L.I.E.S. boss Ron Morelli, on the somewhat unexpected home of Dominick Fernow’s Hospital Productions. Apparently the first of three planned releases from Morelli on the label, Spit is an expectedly skipy foray into raw hardware techno, with timbres that seem designed to drill acutely into your cranium. Approaching things from a different kind of techno angle was Unknown Origin, the first album from veteran techno producer Luke Slater under his LB Dub Corp alias. Anyone who has indulged in any of this material over the past seven years will know what to expect – forward thinking techno with a dub slant – but on this album it feels more fully formed than ever.

It was a typically excellent week for 12″ singles and EPs too, with rising London producer Vester Koza heading up the selections with the third release for his own Maslo label. Like his previous releases, there are comparisons to be made to the likes of Kassem Mosse, Levon Vincent and Joey Anderson, but with a sense of abstraction and spaciousness on display that is very much his own. Meanwhile, New York’s Anthony Naples returned with a two-track single for his own Proibito label, with two track that saw him in typically rough form. “POT 1” sees overdriven kicks, insectoid synths and a looping vocal aim for the jugular, while “POT 2” sees a more hazy take on deep house afforded by some ethereal chords and cyborg bass. On a distinctly more jacking tip was the full Jack For Daze debut of resident Clone chameleon Alden Tyrell, whose Some House 12″ was about as straightforward as peak time house music comes.

On a slightly more discofied tip was the excellent debut from Dukes Of Chutney on Tim Sweeney’s Beats In Space label. Taking a more experimental/downtempo approach than some of the recent BIS releases, Domino is a delightful record full of subtle vocals, Balearic textures and psychedelic influences. Meanwhile FaltyDL’s Blueberry Records presented its second release, a low-key edits 12″ that finally saw the release of his masterful Mos Def rework alongside a contribution from the unheralded Sven Liebeck.

In the bass realm, the big releases was the return of Pearson Sound to Hessle Audio. In his Juno Plus review of HES026, Brendan Arnott said that the lime green of the label signifies “a foray into brighter territories,” and on the evidence of the three tracks, it’s hard to disagree, with “Starburst” especially welding his grime-influenced mechanics with a sequence of chords that could be considered luminescent. Meanwhile, on Planet Mu, there was Control, the new 25-minute mini-LP from label regular Ital Tek, whose eight tracks found the producer nestled snugly in within the 160BPM crawlspace between footwork and drum & bass with some strong sci-fi influences to boot. Perhaps the most enticing record of the week for fans of low end is the new Peng Sound doublepack entitled The Versions, which saw the Dubkasm crew reworking and renaiming each track from Kahn & Neek’s Gorgon Sound EP from the summer, utilising their soundtrac CM440 mixing console, and utilising spring reverb, tape delays and specially crafted effects modulators, plunging the Gorgon Sound duo even deeper into the realms of dub culture.

There was plenty of techno to choose from this week, with the return of Terrence Dixon under his Population One moniker likely to cause excitement among fans of sleek, futuristic techno everywhere. His Reduction label has already seen two releases this year, and Random Variables is perhaps the best yet, with its abstract pulsations combining with some murky sound design to create some particularly cerebral techno. This week also saw the return of the formerly masked figure Rivet, who delivered Driftwood, his second EP for Skudge. It’s perhaps his most accomplished record to date, with the unexpected vocals samples in the title track, the creaking textures of “Crane Dance” and plaintive acid of “Line of Moments” all very impressive. Rivet also turned up on the Dungeon Jams EP from Dungeon Acid on Zodiac 44, remixing the lumbering, heavy, slowed-down ’90s feel of “I Don’t Need It” into something more reminiscent of the era itself; Sex Tags figure DJ Fett Burger meanwhile gave it a more manic 303 reconstruction. Finally, L.I.E.S. introduced a new figure into the fold in the form of Parisian producer Voiski, who provided some unexpectedly melodic techno for Ron Morelli’s label on the highly recommended From White To Red EP.

In more experimental realms dark sounds dominated the week, with Emptyset’s Recur LP for Raster-Noton providing a challenging but rewarding set of their trademark half-rhythms, white noise, drones, feedback and sharp-edged atmospherics. Meanwhile William Bennett’s Damballah 58 provided more “diabolically addictive vaudou rhythms” under his Cut Hands moniker, with the heavier title track being outshone by the more gentle tones of the captivating “Belladonna Theme”. Finally, Mika Vainio continued to make his play for “most prolific artist of 2013” with the vinyl edition of the Joachim Nordwall collaboration Monstrance on Touch. Originally released digitally in September, the pair conjure up seven tracks of lurching drone music distinguished by the swaggering squall of guitars, whilst the scraping, metallic nature of the LP is further emboldened by the materials alluded to in the track titles.