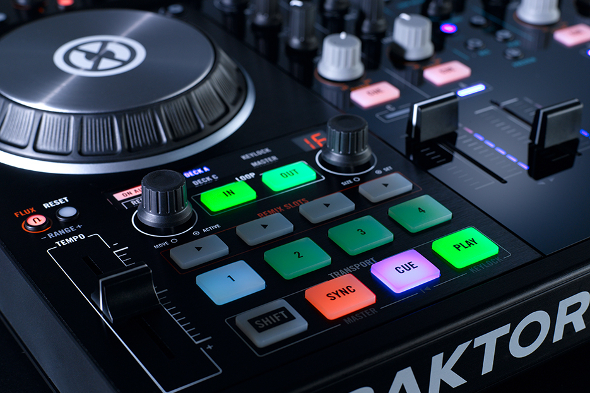 Rob Lee finds out what the subtle new updates in Native Instruments’ flagship controllers for their Traktor software have to offer.

It is often said that a controller’s worth is calibrated by the worthiness of its software, and aside from Serato DJ, you’d struggle to get much better, or more popular, than Native Instruments’ Traktor Pro 2. Over the last few years, there have been plenty of improvements and upgrades to the software, including the much lauded remix decks as well as more traditional looping and cueing and FX control. With the latest flux mode it is possible to work your chosen audio out of recognition and create build ups ready to drop back into the original audio track at the point at which the music would have been playing if you hadn’t decided to tweak your sounds into the realm of live remixing. Most DJs that use the Traktor Pro 2 software will be making use of a laptop in live environments, but now, with the popularity of the iPad and iPhone, Native Instruments have developed the Traktor DJ app for those looking for the next generation platform to host their sessions; as the software develops then it makes sense that the hardware must follow, and with the Kontrol S2 & S4 MKII the controller has been updated to keep up with the developments in the software. 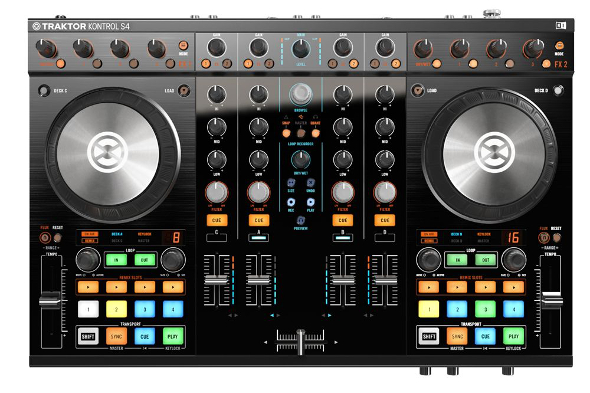 At first glance, it doesn’t seem that much has changed. The S2 and S4 are the same size as their predecessors, and anyone familiar with the original will know that the durable, lightweight controller is easily carried around. However, first impressions can be deceptive, as the new version has multi-coloured backlit transport, cue and remix deck pads that reflect the colours in the software, improving visual feedback. When you think of the amount of simultaneous audio that can be controlled by the S4, for example, it becomes clear of the importance of visual reference during the heat of a live mixing session. The addition of the flux button makes life easier for those DJs that like to mangle their music out of recognition, whilst being able to snap back into the original track in real time.

Further to these updates are improvements to the build quality of the unit. This time around, each control deck has a real aluminium faceplate as opposed to the brushed plastic of the original, making the MKII S2 and S4 more in line with the quality of the Z2 mixer. Further to this, there has been an improvement to the glossy central mixer section, which now features white transfer markers for all of the faders under the gloss finish, making them impossible to accidentally rub off. The jog wheels have also had an overhaul; this time the magnetic braking system has been replaced by a silicon based system, designed to offer a more realistic and weighty feel. The wheels themselves are now aluminium, further extending their durability, and retain the dual touch sensitivity and high resolution control of the MKI models.

“With an improved build quality, better booth control, and compatibility with iPad and iPhone, the magnitude of this update is clearer to see.”

There is also evidence to suggest that Native Instruments have been listening to their customer feedback, as the new units feature both main outputs and booth output connections, with a separate volume control for the booth. However, figuring out which set of outputs is for booth and which is for the front of house can be confusing at first. The S2 and S4 have a pair of RCAs and a pair of 1/4”TRS ports for the outputs, but they are both labelled under the “Main” output heading with a switch to toggle the booth volume control on/off. A simple label would have cleared up the confusion, but the very fact that there is now separate control for booth and main outs is a huge step in the right direction.

By far the biggest development with the Kontrol S series has to be the fact that both S2 and S4 controllers are finally compatible with Traktor DJ software running on iPad or iPhone, and with this possibility comes a series of advanced features that further enhances the versatility you can inject into a mix session. Freeze mode and slicer give you the opportunity to cut up parts of your audio and replay them using the hot cue buttons. You can get into this mode simply by pushing the remix encoder which freezes the waveform on the screen and gives you four start points for the RGB buttons, making a kind of instant rearrangement function and cleverly setting the flux mode automatically. Pressing shift and turning the remix encoder allows you to resize the waveform display on your screen, giving you access to smaller slices in freeze mode. If you want to navigate through your music quickly then holding the shift button and turning the jog wheel lets you scroll through the wave display. It’s then possible to set a hot cue point further in the track and jump there in real time without the audience ever noticing. Fine tuning the beat grip is also possible in Traktor DJ, giving the user more control over tight beat mixing. 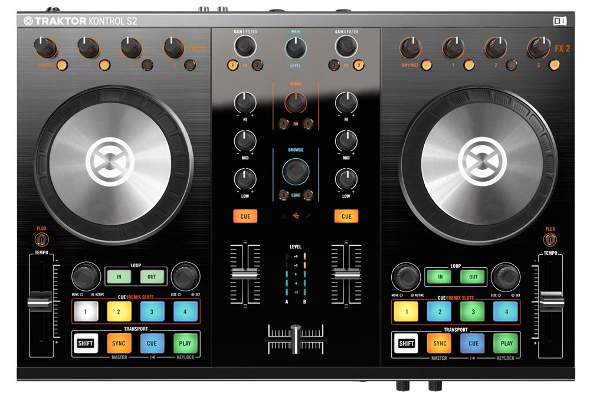 In terms of differences between the two models, the S2 is different to the S4 model as it only allows you to control two decks at a time, and the remix deck controls aren’t an included feature. The S4 has dedicated filter controls for all four channels and the S2 allows the same sort of function, only the gain control doubles as the filter control when the shift button is depressed. Both feature the flux button and the same FX control, mic input with gain control, booth output with volume control and headphone volume. The S4 gives you the option of hooking up your traditional record decks or CD players, making for a completely integrated DJ solution for those that can’t completely give up on their vinyl collections by way of a Cirrus Logic converter that will deliver 24bit resolution at 96kHz.

The all new MKII models might not look as if they are a million miles from their older siblings, and comprehensive access to remix decks is still best achieved using the Kontrol F1 unit. However, there is nothing to stop anyone using an F1 in conjunction with an S2 or S4. With an improved build quality, better booth control, and compatibility with iPad and iPhone (using the special USB cable which ships with the unit) the magnitude of this update is clearer to see. Competition is definitely heating up with Pioneer’s DDJ SX Serato controller, currently making waves. But with the iPad and iPhone possibilities, the all new Kontrol S2 and S4 could still have the edge.