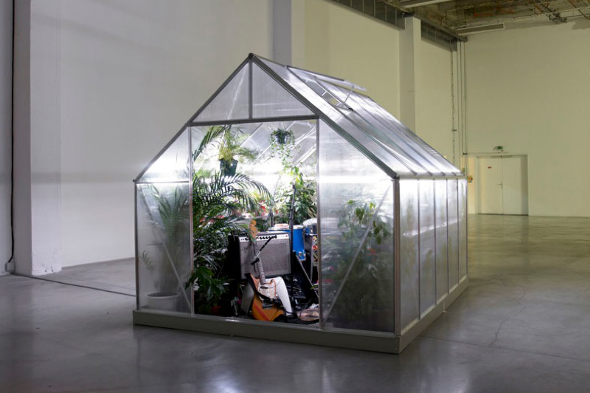 Listen to the Antinote producer’s live 1/4″ tape cut-up and loop improvisation, recorded from a Parisian installation in 2007.

The Antinote imprint have been one of the most intriguing new labels of the past few years, with the likes of Geena, Albinos and Syracuse all providing some fine downtempo oddities and skewed house music. However, it is perhaps the work of label co-head Gwen Jamois that has received most critical interest; in the early ’90s, under the name Iueke, he recorded many straight-to-tape hardware techno jams, some of which have been issued by Antinote (the 20 minute “Alecot” being a particular highlight).

Jamois has just uploaded another such hardware performance onto his Soundcloud page; dating back to 2007, the live 1/4″ tape cut-up and loop improvisation was performed on a ReVox B77, and was made to accompany an installation by Peter Coffin called Greenhouse at the Palais de Tokyo in Paris. Those familiar with Jamois’ work as Iueke will find it’s 50 minutes of musique concrète even more disconcerting than his hardware techno, sounding conceivably like something that could have been issued on PAN.