Best known for their groundbreaking CD decks and media players, and top of the line industry standard DJ mixers, Pioneer offer up their latest range of monitors that are aimed at both dance music producers and DJs alike.

If it were to be put in biblical terms, it could be said that Pioneer are the proverbial Goliath to its nearest competitors David, except that someone forgot to hand the little guy a slingshot; Pioneer’s market leading CD decks and mixers are always top of any professional DJs preferred list of tools. If there is any criticism to be made about the industry standard brand, it lies in the high price of the products and the frequency of new and improved models. So it comes as some relief that when it comes to Pioneer’s newest speakers, the price is most definitely in the accessible bracket. The first speaker from Pioneer that was specifically aimed at DJs was the SDJ08, released in 2011, a model that featured a controller accessory that allowed you to get a handle on the speaker configurations, such as source input selection, mute, EQ on/off and more.

To bring the design up to date, Pioneer have unveiled the SDJ80X monitor that comes with an 8” woofer, and is the largest in the line. The other two are the SDJ50X and SDJ60X that feature smaller woofers of 5” and 6” respectively. However, any direct comparisons between the new model and its predecessor can be quickly dismissed as these new monitors are nearly half the price of the old ones, and give us an indication that Pioneer have listened to their critics and have come with a more competitive product for those looking for a new set of monitors. 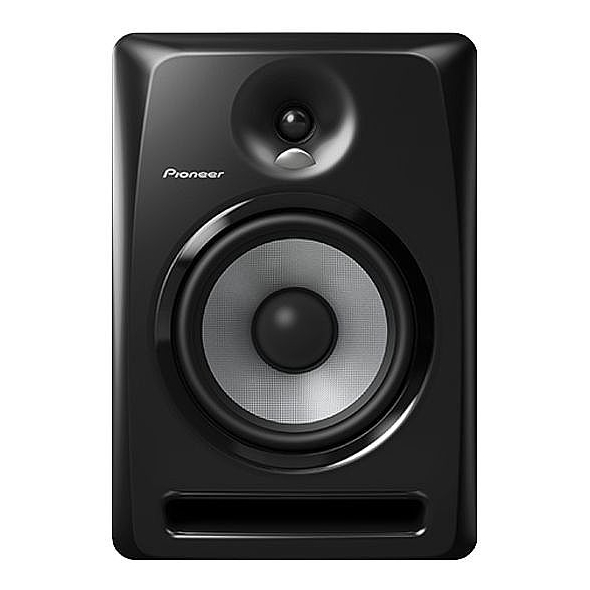 The sound that comes out of the SDJ80Xs is that of a quality design that can handle accurate stereo reproduction together with of the kind of depth that aids the 3D perception of sound; it feels as if you can put your hands behind a vocalist’s head such is the depth of the audio reproduction on offer. Part of the reason for this improved stereo image could be attributed, in part, to the use of a convex diffuser that comes as part of the tweeter design. The 1” soft dome includes the diffuser that has been borrowed from TAD Labs’ TAD Pro TSM 2201 LR studio monitors, helping to spread the image of the sound over a wider area. This two way design features an 8” woofer with an aramid fibre cone – a strong synthetic material used in military body armour – which is both lightweight, rigid and designed to reproduce mids and lows all the way down to an ankle-cooling 40Hz. When it comes to bass reproduction it is generally a game of pure physics. The bigger the woofer, the more chance there is that the bass will be reproduced faithfully. It is worth noting that Pioneer have included two smaller designs in the form of the SDJ50X and SDJ60X with smaller woofers, that also have slightly less low frequency response, but feature the same tweeter design.

Having been designed for the purpose of listening to dance music it goes without saying that perhaps what users of these speakers will most be concerned to hear will be the deep bass sounds of punchy kicks and earth-shattering bass lines, and to satisfy this need Pioneer have designed the bass ports to this end. The front reflex ports have grooves running along the upper and lower edge that are designed to improve the air flow, and Pioneer describe this modification as providing “lossless bass performance”. To achieve this strong low frequency response the air flow is regulated by small swirls in the air that are generated by these grooves. Certainly lovers of dance music with its emphasis on hefty low end will be drawn to this design feature. But although these speakers can deliver the bass efficiently, it should be noted that as monitors they generally have a flat and true sound that make them ideal as near field monitors for your production space, if you are on a budget. 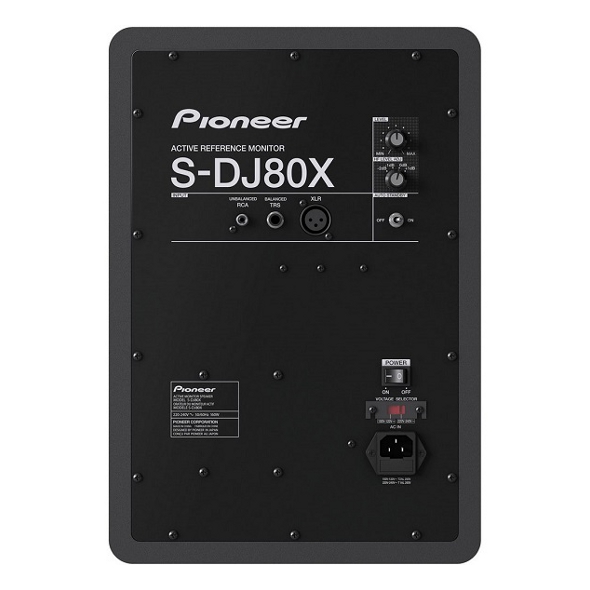 Evidence of the much improved SDJ80X comes in the fact that it doesn’t come with extended EQing features and only requires a single volume control and a switch for attenuating the high frequency by -2db, -1db, 0db and +1db. The only other switch on the rear of the speakers is to turn on the standby mode which kicks into operation when there hasn’t been any direct audio feed to the monitors for a certain amount of time, saving energy by dropping the total wattage from 160 to less than 0.5. This two-way speaker design also includes a bi-amp to ensure the sound is even all the way up to 20kHz, with 125 watts of power going to the woofer and 35 watts to the tweeter. Connecting the SDJ80Xs couldn’t be easier as there are sockets for XLR, 1/4”TRS as well as RCA adding another level of flexibility to these speakers.

These flexible monitors from Pioneer will appeal to those DJs looking for accurate monitoring whilst preparing sets, and in addition to this they could double as studio monitors for those that are new to production and need something that is good enough to keep them inspired without breaking the bank. In this case competition comes from Adam Audio’s F7 monitor which has a slightly smaller woofer but a much higher frequency response, and Yamaha’s HS8 active monitor, both of which are more expensive than the Pioneer SDJ80Xs. With a sturdy build quality and an MDF fabricated cabinet that is thick enough to lessen the effect of unwanted resonance, the SDJ80Xs are in line with Pioneer’s reputation for making high quality DJ equipment that are both functional and desirable. This time Pioneer have done all of that and kept the price down as well, making these speakers even more desirable for those buying their first set of monitors.