Scratching The Surface: Notions of the Underground 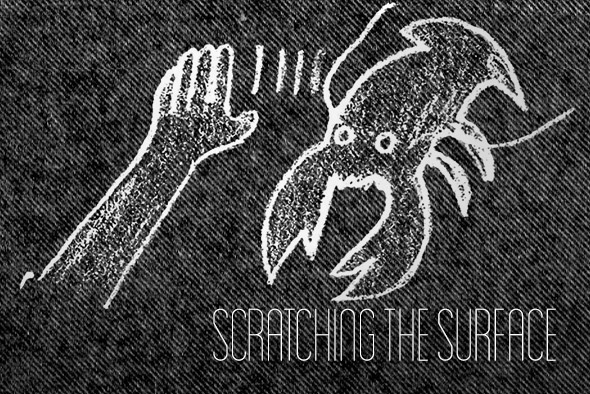 If you read the biography of Bristol producer Eats Everything that’s currently residing on his Facebook page, then you’ll notice the bold claim that he has “defined a whole new genre of forward-thinking underground house music”. Whatever you think of his music, it seems strange for Eats Everything (or his overzealous management) to describe himself or his music as “underground”; 88,000 Facebook ‘likes’, a Radio 1 Essential Mix and a recent appearance on the cover of Mixmag with his Dirtybird fraternity surely qualifies as mainstream success. It was similarly odd to read one of the fans of Tale Of Us to describe their remix of Mano Le Tough’s “Primitive People” as “underground track of the summer”. Can Tale Of Us really be considered “underground”, with a Renaissance mix and numerous appearances in Ibiza over this summer? The word “underground” is thrown around so much that it seems fair to say use of the term when used in relation to dance music is as meaningless as the word “indie” has become to guitar-based music. In relation to America’s corporate EDM world then yes, perhaps Eats Everything and Tale Of Us do qualify as underground, but it’s almost like saying Mumford and Sons are somehow more “indie” than Green Day.

The recent troubles suffered by the Eastern Electrics brand in the wake of their three day festival in August stirred up some debate on the RA forum about these differing notions of the underground, with the contrasting line-up (Theo Parrish and Hot Natured for instance) suggesting that the festival was attempting to cater for everyone, and ultimately alienating many in the process, with suggestions of low ticket sales as a result. Everyone wants to see their music as “underground,” but there seems to be no real concrete identity as such any more. This perhaps explains why the term “outsider house” has proliferated this year; although ridiculous, it transmits the message that the music in question stands completely apart from the increasingly homogeneous form of house music being proliferated by the likes of Hot Creations. It seems that the term has now been well and truly absorbed into marketing speak, and may never be reclaimed, but that’s not to say the underground spirit isn’t still thriving across all types of music, and it’s something that seems to have been prevalent across some of the best records of the past few months. 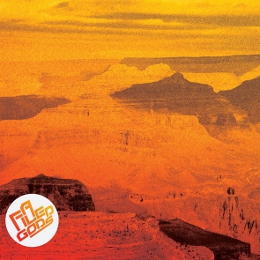 If there’s a figure in London that seems to exemplify this approach it’s Slackk. As the man behind the Grimetapes blog he’s allowed access to many vintage sets, but as part of the Boxed night he has been running since March alongside Logos, Mr. Mitch and Oil Gang, he has also helped to give the recent resurgence of instrumental grime something of a focus in the capital. His music however, although most definitely part of this new grime scene, stands apart from that and the music of his peers, and his new EP for Local Action, Failed Gods, is perhaps the most fully formed example of his approach to date. Opening track “Empty Bottles” is wilfully melodic, channelling Japanese 16-bit video game music through the rough lens of grime, while “Shogun Assassin” treats its iconic grime string stabs with a more cinematic quality. This kind of atmosphere is continued in “Silk Robe”, whose drawn out, codeine haze is like an alternate version of Angelo Badalamenti’s “Laura’s Theme” custom made for wandering the darkened streets of London. What’s so striking about Failed Gods is that although these tracks could work on a dancefloor, the EP certainly doesn’t pander to it – for Slackk the focus seems to be on making material that’s musically solid first and foremost.

As “bass music” continues to drift inexorably into mediocre tech house territory, it’s producers like Slackk that make compelling evidence for this new form of instrumental grime being the thing take the place of the strange garage-techno-R&B hybrids that seemed to be so prevalent a few years ago. However, the latest release on the Blank Mind label demonstrates that there is still interesting stuff happening outside of grime. Coming from the ridiculously named Alan Johnson (who will put many mind of Mark’s egomaniacal boss in Peep Show), the two-track Goron Sound/Fickle single provides some of the strangest music to emerge from dubstep’s DNA since Objekt’s “The Goose That Got Away”. It comes as little surprise that Alan Johnson is in fact a duo comprised of Elsewhere and Stickman, two producers with previous form on dubstep label Mindset, but listening to both tracks is like trying to gain a footing in ground that’s undergoing a process of liquefaction; wobbling subs wrap themselves around your feet and induce blind panic while the crisp percussion rattles on top like loose surface gravel. If Shackleton had been producing his early Skull Disco material on an extreme caffeine bender, it might have sounded something like this.

Outside of the realms of the low end, L.I.E.S. continues to provide a rallying point for genuine underground house and techno, but even within its own label eco-system there are those that simmer under the surface. Jahiliyya Fields’ Unicursal Hexagrams for example, was probably one of last year’s most slept on L.I.E.S. releases; six tracks of hypnotic, pulsing ambient music with Eastern undertones, it stood out a mile amongst the dancefloor-focused material of Steve Summers, Willie Burns and Svengalisghost, and was considerably more out there than even the Steve Moore and Professor Genius record that arrived around the same time. If there’s one criticism to be drawn of some recent L.I.E.S. releases, it’s that they have perhaps lacked this variety, falling largely into the category of hardware techno, which has limited appeal outside of a club environment. 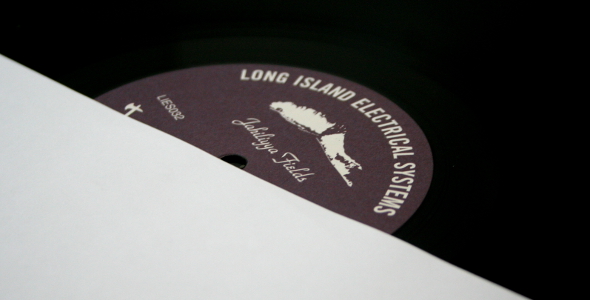 In some respects Jahiliyya Fields’ return follows this trend, but in a way that’s also unexpectedly brilliant; “Aeon Aeon” is initially characterized by its firm 4/4 pulse and angular hi-hats that could be interchangeable with many other lo-fi hardware jams, but there’s a heady psychedelic wooziness across its fifteen minutes that makes you feel like you’re communing directly with a divine entity transmitting its thoughts via satellite; its futuristic techno framework suggests Juan Atkins, and the full-bodied yet abrupt tones suggest Manuel Gottsching. The restrained hedonism of “Pleasure Sentence” uses much more organic rhythms and mirage-like tones to place you at the centre of a medieval convoy making its way across the sub-Saharan continent, while “Burned On Type” is the mid point between these two, a beatless combination of ascending and descending tones that sound like being caught adrift in a cosmic wave machine. If the hardware aesthetic is to continue without reaching a creative dead end, then more of this kind of off-kilter psychedelically minded techno (see also Ital’s recent output) will be what drives it.

The one place in the world that will always be defiantly underground is Detroit. It seems as if the underground values are passed down between generations in a way that just doesn’t seem to happen anywhere else (see Big Strick’s son Generation Next for proof of that). It would certainly explain why Detroit isn’t short of young, talented up and coming producers right now – in fact it’s unlikely that the city’s been in such creative form since the ‘90s. Between the likes of Kyle Hall, MGUN and Generation Next, the future of Detroit’s legacy in techno is more or less assured, no matter how desperate things may continue to get for the city itself. The latest name to add to this list is Jay Daniel, whose debut EP, Scorpio Rising, comes with considerable expectation; after all, not everyone gets to release on Theo Parrish’s Sound Signature, let alone their debut. 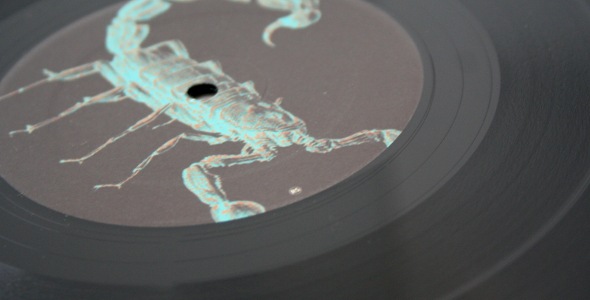 Daniel is a resident alongside Kyle Hall at Detroit’s Fundamentals night, and they both share the kind of raw approach to production that renders their music in scuffed-up sandpaper tones. Underneath all that surface grit though, there’s the same kind of simple warmth that soaks into the best Omar S tracks. “No Love Lost” for example simmers under the surface, but intermittently explodes into life with a filtered sweep or explosive snare. “Bubble Cougar” offers the most enjoyable moment by far; although its simple bassline is nothing radical, Daniel’s percussion makes for an absolute dynamo of a club track, with a perpetual snare roll that goes from crackling like dry twigs smouldering on a camp fire, to sounding like a box of firecrackers that’s just had a match carelessly tossed inside. It’s that rare combination of rigid hardware grit and unquantised human error that makes for the best raw techno excursions, and Jay Daniel seems to have that magic touch.

Ann Arbor is another one of those American cities that seems to generate artists that pay little attention to trends. D’Marc Cantu is one such producer, who, along with the likes of James T Cotton, Beau Wanzer, and more from Traxx’s loosely affiliated Nation stable have been experimenting with raw, impressionistic forms of house music long before it became quite the critical obsession it is now. While the output of labels like L.I.E.S. and those close to them has edged ever closer to noise and industrial-leaning techno, the likes of Nation and also Crème have continued as they always have, and D’Marc Cantu is perhaps most representative of this ethos. At six tracks, Cantu’s latest release for Creme is almost a mini-album, and it might be the best thing he’s released, if only because it’s so brilliantly odd; on the title track a distorted vocal chatters underneath swampy chords and layers of acidic melody, but it’s the way the beats seem to drift subtly out of time with everything else that gives the track its uniquely disorientating effect. It’s the same on “Tazakuro” where a pulsing bassline drives
forward crystalline notes that seem forever on the verge of coming unstuck from their rhythmic moorings. For sheer pleasure it’s “Size & Shape” that provides the killer moment; both strangely 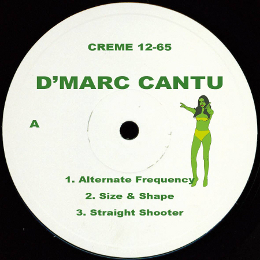 subdued and pounding (something Disco Nihilist also does particularly well), it’s quite simply the best house track I’ve heard this year. Going back through Cantu’s catalogue it becomes obvious that it doesn’t have a sell by date, and “Size & Shape” is one of those tracks that will outlast any Tale Of Us remix that happens to be flavour of the month in Ibiza.

This kind of impressionistic, rough-shorn house music is also what makes the soon to be released debut EP from Palms Trax on the fledgling Lobster Theremin label so alluring. Lobster Theremin is a new label endeavour borne out of London’s Streets Of Beige party, who have tirelessly being promoting new artists in the capital for the past three years. Although most definitely separate entities, it’s this ethos that drives the new label, whose debut comes from Streets of Beige resident Palms Trax, a Berlin-based producer who arrives with warm take on house music that eschews the gritty lo-fi aesthetic for something cleaner. Classic Chicago house is an obvious inspiration for Palms Trax, but his gleaming approach is far from obvious, having more in common with the ’80s-inspired output of the Future Times label than anything else.

This is particularly evident on “Late Jam”, a track whose unadulterated drum machine rhythms are reminiscent of Maxmillion Dunbar’s Dolo Percussion project, and on the sublime “Equation”, whose angular synth strings and chunky bassline could easily have been a cut on Max D’s recent House Of Woo LP. It’s testament to the quality of Palms Trax’s originals that the remix of “Late Jam” from notable underground house hero Willie Burns doesn’t outshine the originals in any way. The big problem with the word “underground” and indeed “outsider house” is that they are intended to create divisions. The scattered psychedelic keys and simmering pad outro of Palms Trax’s “Houses In Motion” may be considered underground house music by some, but its inherent warmth makes it the kind of track that should be appreciated no matter which side of the divide you stand on.