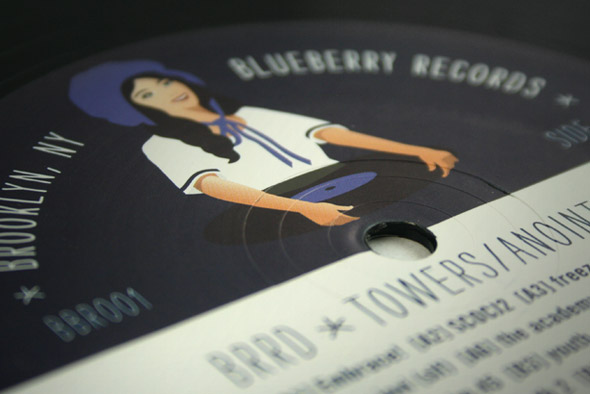 Brrd’s Towers/Anointing is the inaugural release from Blueberry Recordings, the new label from FaltyDL. The label has been trailed for some months, and Drew Lustman had announced that the catalogue would be opening with the Denver producer’s record, but relatively little is known about Brrd. He produced a song on the Lord Byron tape, which suggested a love of jazz-tinged hip-hop in a classic vein – but on Towers/Anointing he announces himself as a much more interesting prospect that that track might indicate.

As the name suggests, Towers/Anointing is split into two halves. The A side is given over to wonky, squelching takes on hip-hop in the Slugabed mould, with lead lines that flit in and out of time fixed together by smoky low end. “SCOCJ” pits middy synths, seeming to imitate a trumpet, against a thunderous kick drum and hazy tremolos, while the delightfully titled “Fuck Bon Jovi (SLF)” lurches along, pushing at the boundaries of conventional timing, always threatening to fall into syncopation, but threaded together by an emphatic rhythm section seemingly recorded through a shoe, or perhaps a piece of wet cardboard.

Donuts is the clearest reference point here, with Dilla’s influence hanging heavy over both the form and the content of the record. Melodies are inverted, as on the sample of Floating Points Ensemble’s “Almost In Profile” on standout “Freezetag”, and the first half of the set has the gentle THC tinge that one might associate with so much Midwestern hip-hop. There are, though, clear deviations from the formula, particularly on “STDB”, which most clearly resembles Madlib’s work with the Last Electro-Acoustic Space Jazz & Percussion Ensemble, with intricate tom rolls providing a bed on which a six note brass melody sits.

The Anointing side, meanwhile, is much more vocal-heavy, drawing on a set of ecclesiastical samples from God-fearing contemporary soul artists, the most prominent amongst whom is J. Moss. The Detroit singer is sampled on the side’s title track, in which his contemplative vocal is counterpointed against a furious, sermon-like spoken word of the sort one might expect to hear in one of the Southern states’ more aggressively evangelical congregations.

The spiritual theme continues throughout the second side. Even on “Wake Up And I’m 45”, the vocal on which is warped to the point of unintelligibility, there is a sense of worship; an indication in the familiar chord progressions, melancholic but somehow redemptive, that this has its roots in religious music. “Satan”, meanwhile, begins with an explanation of a woman’s baptism (“Children and babies should be held in the most sacred regard, because we feel that they are the most natural and true magicians”). It is on the more mystically titled “Blood Oath”, though, that Brrd’s formula reaches its peak. By far the most beautiful track on the record, “Blood Oath” sees an elegiac, bittersweet vocal and piano sample looped at two different speeds, producing the disorienting effect of continuously zooming in and out of a repeated scene.

Towers/Anointing is a record that repays patience. No track is over three minutes long, and most come in below the two minute mark, but there is so much elegant texture in these miniatures that the full extent of their beauty only really becomes apparent through multiple listens. A highly auspicious beginning for Blueberry, and a gripping next move for Brrd.