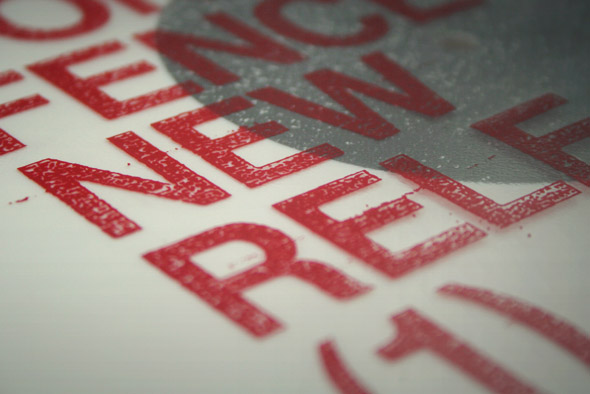 A theme of collaboration punctuated many of the week’s new releases.

The re-emergence of PAN as a record releasing entity after Bill Kouligas took some downtime to focus on organising festivals continued apace with two of their most eagerly awaited releases in 12s by Black Sites and Concrete Fence. Both are collaborative projects of varying vintage, with the former comprised of Golden Pudel residents Helena Hauff and F#x, and the latter a devilish concoction of Karl O’Connor and Russell Haswell. The two track Prototype 12″ from Black Sites is perhaps a stronger example of Hauff’s blossoming potential as a producer than her Werk Discs debut, whilst New Release (1) was exactly the sort of broken techno covered in textural muck you’d expect from the pairing of Haswell and O’Connor.

Elsewhere this week saw the arrival of Model 001, the debut transmission from another high profile collaboration in the Shifted and Sigha helmed A Model Authority project. The new collaborative was apparently born out of “the desire to rise above the very modern mediocrity and complacency that surrounds us,” and it sees both producers in a German-techno kind of mood – click here for a fuller dissection from Richard Brophy. The collaboration theme continued with the third release from the Brothers label which paired an incendiary production from Doug Lee and Milo Smee with two cuts from Neil Landstrumm and Forward Strategy Group’s Patrick Walker – it’s our favourite yet, whilst Perc Trax LTD returned with the first (of many hopefully) collaborative releases from Perc & Truss. Even Fachwerk were bitten by the collaboration bug as the title track to the imaginatively named Fachwerk 30 saw all three label founders knock heads on a production that also featured the vocalist Sophia.

Aside from the vast amount of collaborative releases, it was also Frak Week here at Juno Plus as a number of records bearing the touch of the veteran Swedish troupe kept the office stereo on the point of implosion. Matador was a welcome return to Kontra’s Frak-dedicated White Label series for Jan Svensson and company after the quartet of 12″s released through the label last year, with this latest effort a worthy addition to the KMWL canon. Accompanying this were two ‘mini’ LPs released on Frak’s Börft Records by Andreas Tilliander and the unheralded Edmundy. The former’s arrival on Börft has been keenly awaited and documented here at Juno Plus and the six track release finds Mr Tilliander in much more playful mood than the highly conceptual nature of his TM404 LP for Kontra, drawing on 90s rave and techno tropes in a fashion that makes it highly appropriate for Börft. Less is known about Edmundy, aside from the fact he’s native to Swedish town Karlskrona like many other artists on Börft and his production output is intermittent to say the least. Regardless, the Astropsychics LP is a wonderfully clean sounding doctrine on house and techno that sits somewhere between Sex Tags and FXHE.

It felt like the halcyon days of 2011 era SWAMP 81 this week as Loefah’s label slipped out some double plated Boddika action in the shape of Steam. Avid followers of Al Bleeky’s productions and DJ sets will no doubt have been familiar with the four weighty tracks spread across this release and it’s little surprise that it promptly sold out! Also making a return to a label he’s highly synonymous with was D’Marc Cantu, whose six track Alternate Frequency 12″ for Créme Organisation maintained our belief the Ann Arbor native is at his best when accompanied by a Créme catalogue number. US producers involved in dalliances with European labels was also in evidence on the debut release from new Berlin label Studio r° which featured two A-side offerings from Fred P and Eric Cloutier – two producers who recently swapped NYC for Berlin. Special praise goes to the recently formed Clan Destine Traxx label whose second Dark Acid release was every bit as grotty as the first and featured two examples of just how good Optimo Music act Golden Teacher are.

With the month of August signalling the onset of an annual release drought, there’s been a serious lack of quality box office long players released. The arrival of Forest Swords’ long awaited debut album Engravings is potentially the first of numerous last quarter candidates for end of year lists. It’s certainly a big statement from the Wirral based producer, expanding on the themes of his highly regarded Daggers Path EP and exposing a richer display of his production palette – “Onward” being a favourite here, sounding much like Andy Stott shooting lasers in a cave. The self titled LP from Katie Gately on Public Information is likely to appeal to fans of Forest Swords too, with her own heavily treated vocals cast out amidst an occasionally bewildering array of sample-based scrapes, cracks and drones that somehow shape themselves into an avant-garde form of pop music.