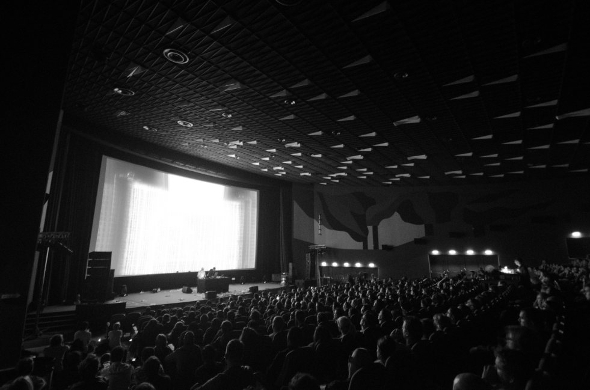 While announcing a new bill of acts to play at Unsound 2013, the Krakow festival have introduced an ‘INTERFERENCE’ theme which plans to impose a ban on photographs and filming of live shows.

The ban of capturing photographic material the organisers of Unsound have placed on the festival has also been extended to the media, with zero photo passes said to be issued. An official Unsound photographer will however, “discreetly and efficiently document a few special events, commissioned or premiere works, due to their unique nature,” reports the Unsound website. The ban will not be policed by security guards, with Unsound Artistic Director Mat Schulz requesting, “if you see someone next to you filming, ask them politely to stop.”

Unsound is asking attendees to resist the temptation to put cameras or mobile phones into action and have issued a statement saying: “The idea behind this ban is not to denigrate photographers or cast aspersions upon the desire to take snapshots of one’s own life, but rather an experiment in resisting contemporary habits as they pertain to instant documentation, ‘sharing,’ and lived experience.”

Schulz has personally added to the statement by saying, “our aim is to encourage our audience to focus on being in the moment, and not distract others out of that moment,” and, “we want to question the automatic tendency to place photos and videos of concerts on-line, be it on social networks, music websites or video streaming platforms, to put some tiny glitch in the constant bombardment of images, today’s main tool of communication.” Various concerts will be recorded, archived and transmitted however, thanks to a partnership Unsound has formed with London-based radio station NTS.

This announcement has been accompanied by another round of new acts added to the Unsound bill. Pantha Du Prince will perform “Elements Of Light” with Norwegian bell ensemble, The Bell Laboratory, while more collaborations come via Keith Fullerton Whitman and Roly Porter’s teaming up with video artists Lucy Benson and Marcel Weber, who present “Dream Cargoes”, inspired by British novelist J.G.Ballard’s book of the same name. Other acts announced for an already plump 2013 edition include Laurel Halo, RVNG Intl’s newly added Australian duo Gardland, Powell and Samuel Kerridge whilst the Lisbon label Principe Discos have been invited to Krakow for a spotlight showcase.

Unsound 2013 takes place on October 13-20. Despite weekend passes selling out some time ago, organisors plan to offer individual tickets to the festival on September 2.