Win vinyl and tickets to Dream States with Heckle, Kupfer, Sotofett and FIT

John Heckle, DJ Sotofett, Florian Kupfer and Aaron “FIT” Siegel head to Corsica Studios for Kristina Records’ third Dream States party – and we have a double pass, tote bag and Sotofett vinyl to give away.

As anyone who has been to a Kristina Records in-store will attest, the staff have as excellent taste in DJs as they do in vinyl, and their Dream States party has helped expand on that experience of standing in their tiny store with a can of Red Stripe. Following their two previous Dream States parties with such luminaries as Hakim Murphy, Ike Release and Delroy Edwards, the Dalston-based store prepare for their biggest party yet by venturing south to Corsica Studios.

Taking place on August 30, Mathematics artist John Heckle (pictured above) will leave the analogue gear at home to headline their first Corsica takeover with one of his equally well informed DJ sets. Joining him in room one will be L.I.E.S upstart Florian Kupfer – whose rough and ready house entry in to the L.I.E.S. white label series has proved one of the label’s sleeper hits of 2013. Sex Tags Mania boss DJ Sotofett has been invited back for a second time after headlining the second Dream States event in May, while Detroit-based FXHE artist and Kassem Mosse collaborator Aaron “FIT” Siegel will join him to make his UK debut in room two.

Kristina have kindly provided a pair of tickets, a 12-inch copy of Sotofett’s Diggi Dubbi Tripp Mixes on Thug Records, and a tote bag for one lucky winner. The competition will run until Wednesday, August 28 at 2pm, with the winner notified via email shortly afterwards. 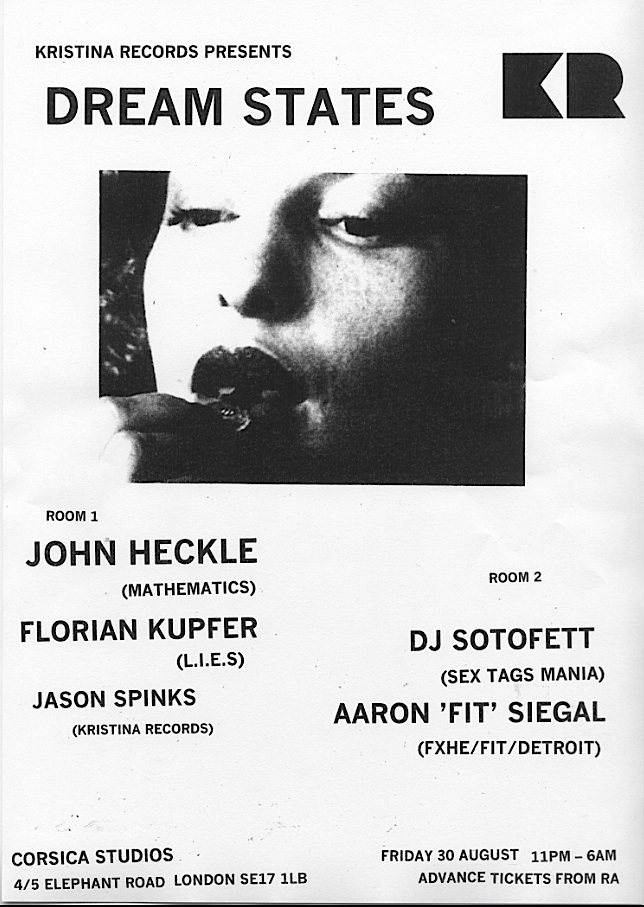