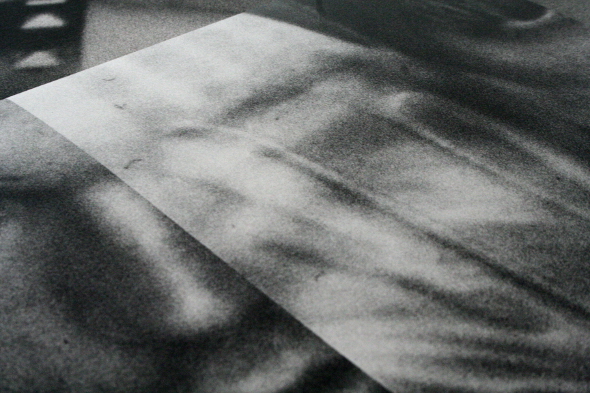 Luke Wyatt’s musical ascent hasn’t exactly been meteoric, but he’s certainly risen to prominence fairly quickly. Initially known as a visual artist – primarily for his work on Peoples Potential Unlimited brilliant PPU Video Party DVDs, but also for the likes of I:Cube and Mock & Toof – he’s spent the last 18 months impressing with a sludgy, atmospheric and often emotion-rich musical experiments. So far, he’s released two albums; the decidedly out-there collection of experimental off-cuts, Fragments So Far, and March’s 10 For Edge Tek, described by this reviewer at the time as a cross between “a latter day Steve Reich with drum machines and effects units”, and “early ‘80s industrial noise”. Add to this Tarifa, an EP for the L.I.E.S white label series that has become one of the hyped imprint’s most sought-after releases. This is due in no small part to the title track, a krautrock-influenced fusion of bubbling, slo-mo drums and glistening, ethereal guitars. For this writer, it remains one of L.I.E.S most thrilling and rewarding releases.

There’s no doubt that Wyatt is an exciting producer; while dedicated to left-of-centre production techniques and fiercely experimental, his tracks resonate more than similar exercises in leftfield electronics. He says his music “comes from the gut”, and you can tell; even his most out-there experiments are likely to spark an emotional response from the listener. To say he’s a relative newcomer to music production would be a mistruth. Although his music has only begun to seep out in recent years, he’s been experimenting with cassette decks, rudimentary production techniques and effects units since he was a child.

Earlier in the year, he told Juno Plus about his “caveman” experiments, which usually involved two tape decks: “It was like two boomboxes making out, their speakers smooching – tweeter to tweeter liplock. But at the same time I’d add another element on top, like another guitar part or whatever.” This inventive approach to music-making is not that unusual – many DJs and producers began their careers as 10 or 11 year-olds experimenting with tape decks and record players – but it does at least demonstrate Wyatt’s long-term commitment to his art form.

Some of those experiments, and those created later, as a curious teenager with a tape fixation, have now seen the light of day on Teen Hawk, an album of Wyatt’s previously unheard early recordings. The fact that these recordings are seeing the light of day on Emotional Response is perhaps fitting; in the last two years, Stuart Leath’s clutch of Emotionally charged labels have become a constantly impressive source of rediscovered gems, Balearic curios and otherwise unheard musical oddities.

There’s an argument to say that much of Teen Hawk sounds ‘Balearic’. Tracks such as “Bertone Stratus”, “I Recommend Starman” and “Mintwood” drift between the speakers as if caught on a warm, mid-morning breeze, all wide-eyed backwards guitars, orange-hued synthesizers and fuzzy analogue beats. There are, of course, moments that hint at his modern style, described by Wyatt as “Mulch”; the droning, scattergun, concrete-clad intensity of illbient cut “Greystoke One” and the creeping paranoia of “Wrong Crowd” (all distorted loops, heavyweight space and intense electrical impulses) both eschew the joys of melody in favour of something altogether weirder and wilder.

Yet the overriding feel of Teen Hawk is positive, joyous even. The album’s finest moments are intensely beautiful. Chief among these is “The Music You Hear At Seaworld And Never Forget”, an eyes-wide-shut blast of delay-laden guitars (both acoustic and electric, complete with solos), shuffling rhythms, sun-bright atmospherics and baking hot production. The similarly picturesque “Old Achieva Care Bear”, which pits smile-inducing guitar motifs against droning krautrock synthesizers, is almost as good. Overall Teen Hawk suggests a greater emotional depth and wider musical palette than we’ve perhaps come to expect from Wyatt, whose latter-day productions sometimes only flicker with intense beauty. Either way, it wets the appetite for what’s to come from Wyatt in coming years.