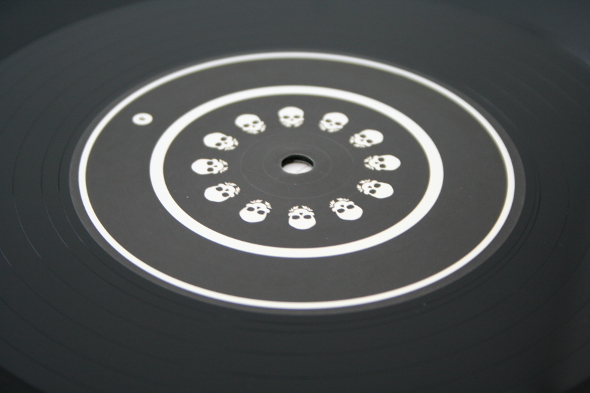 Considering their output to date, it comes as something of a surprise to find Kowton and Hyetal conjoining for the inaugural release on Happy Skull. The label is one of the freshest ventures to emanate from the wider Idle Hands family, curated by Bristol DJs par excellence The Kelly Twins and featuring two regular fixtures in the shop on either side of the counter.

As such it’s understandable that the two producers in question would cross paths, but to listen to the plush synthscapes of Hyetal’s recent Modern Worship LP or experience the battery of grime-inflected gut punches that have characterised Kowton’s music of late, you wouldn’t immediately put the two together. On this record, which seemingly signals the start of a focused new project for the pair, the meeting of minds comes together gracefully, signifiers of both artists shining through but largely summating to a new and unpredictable end.

“Control” leads the charge with an industrial strength clout, although in the teasing intro the possible directions unfurl slowly, trying to cut through the static hiss and snapping hats. The bittersweet synth notes that linger in mid-air could only belong to Hyetal, full of the machine melancholia he has crafted his name on, but when the drop comes in a rugged house stalker emerges full of oppressive bass growls and muted claps. There’s a dynamism to the mix at all times, subtle touches of found sound cutting in and out, occasional stabs of choir tones flitting in for a darkside rave flavour that calls to mind Unique 3’s seminal “The Theme”, except more dystopian than even that most future-shocked of tracks.

“Consumption” is in fact an alternative take that follows in the version tradition of the sound system culture that ballasts the Bristol music scene, and this time your can hear Kowton’s urban malaise plastered all over the mix. With guttural “Pulse X” bass stabs and rasping claps that follow on from the likes of recent offerings “Raw Code” and “TFB”, the track taps into the fertile current of grime revisions and makes for a smart counterpoint to the murky 4/4 surge on the flip. Really though Hyetal’s hooky synth refrain binds the track together and in many ways brings a sense of cohesion to the record as a whole. For a simple two-bar six-note riff that occurs intermittently, the effect across the whole 12” is undeniable, like a shot of forlorn hope amidst a landscape of jagged edges and bottomless pits.

Many would not have predicted such a collaboration in the first place, but in the end the record makes total sense, drawing on the strengths of both artists and channeling them into an exciting release that manages the tricky feat of giving existing fans something new to digest as well as that satisfying hit of familiarity you crave from your favourite producers.

A1: Control
B1: Consumption