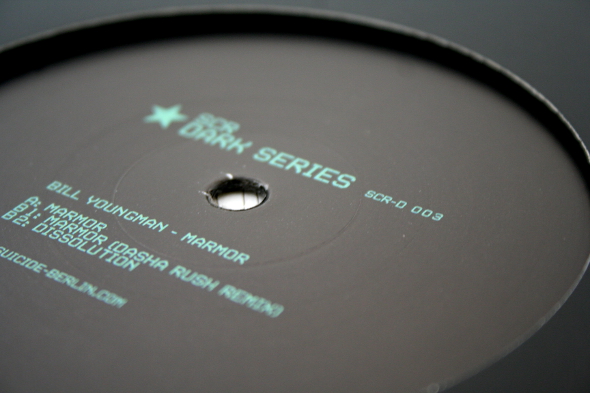 Bill Youngman has been putting out music for the best part of two decades, but Marmor is one of his most impressive releases to date. In part it’s down to cohesion; Youngman’s back catalogue spans a wide range of sounds, from bone crushing techno to jittery electro, while this 12” shows he has a broad talent, it also suggests that he has been unable (or unwilling) to settle on one style for too long.

The beauty of Marmor, which appears on Killekill-affiliated SCR Dark Series, Youngman’s unofficial home, is that it neatly ties together many of the previously disconnected elements in his catalogue. On final track “Dissolution” for example, dubby effects whoosh in, tempered by the nickel-plated percussion and heavy drums, but the pace is slower and the rhythm verging into stepping territories.

The title cut “Marmor” is also based on a similar sound; the drums are robust and grainy, the percussion razor sharp as it slices through the fathomic bassline. The key difference though is the procession of reconstituted stabs that the arrangement is flecked with. Echoes of Youngman’s past output for the Scandinavia and Serotonin labels flash past as these stabs appear at first and then lapse into drones bristling with menace, elevating what is well-constructed club techno into a track that  trips the light fantastic .

SCR has recruited one of Youngman’s contemporaries, Dasha Rush to rework the title track. Like the original’s author, the Russian producer and DJ keeps a focus on forceful bass elements that are left to simmer away as an accompaniment to a harder, steely rhythm. Rush’s remix is harder and faster than Youngman’s original, but she has the good sense to cling on to the producer’s musical past. In her hands, they revert to an even earlier time, reworked and tweaked to sound like they were lifted from a release by early 90s producer Mescalinum United. As Youngman himself has demonstrated, borrowing from the past can be a powerful weapon.